Michelle Rhee Is Not The Lance Armstrong Of Education 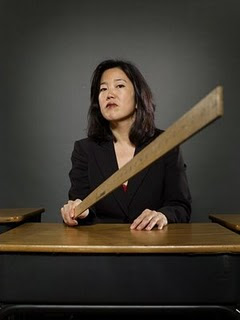 SHE'S the BALCO of Education.

And look, this stuff was known some time ago. Not only that, but the Theory of Zero-Cost Lunch was disproven in the 19th century. But Rhee has gotten away with claims of miraculous (and instantaneous) improvement both as Teacher for a Fortnight and then as Chancellor of D.C. schools. In both cases those students remained in the system; their further progress was of no interest to anyone. The fact that there were suspiciously-, make that impossibly-, high levels of wrong-to-right answer changes was spotted a short time later. The fact that D.C. schools then undertook a completely phony "review" which didn't actually look for cheating before giving the system ten thumbs up for honesty was known right away. When she was voted out by proxy in 2010 she landed with her own tax-exempt slush fund, which noted skeptic Oprah Winfrey helped launch. (Then, sadly, unqualified fluffing from Colbert while she was helping peddle Waiting for Superman and waiting for her closeup. With her new sinecure came her sudden support of school vouchers, a Jim Rockford 180º as the last piece of the Rich Guy Wingnut Education Invasion she hadn't previously endorsed.

Any single bite of this crap salad should have been enough for anyone to cast a wary eye at Michelle Rhee and the rest of the "reform" movement. Very few did. There's your evidence for the shortcoming of American education. Unless it's something else entirely.

Doghouse you've scooped my usual news outlets - yeah you're right, the cheating surrounding Testing, Inc. is old news (the New York scandals are my own favorite, why aren't all those guys in jail - oh, right). Maybe things are turning around a bit, the overwhelming stench of corruption around testing and charter schools and union-busting laws is seeping into the national discourse.

But I wrote because - maybe it had to do with reading about Malala Yousafazi just before - seeing Michelle Rhee and reading your piece just made me sad, instead of sputtering mad. What does it mean.

The answer is vouchers, because schools aren't rackets enough. We need for more private citizens to make more money from taxpayers funds while serving fewer children.