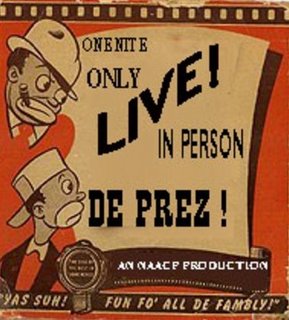 Bush@NAACP [Kathryn Jean Lopez ] I was just talking to a crowd watcher about the president's speech today who noticed and noted: Whenever the President mentioned policies that could actually provide long-term benefits for blacks (school choice, home ownership initiatives, asset accumulation and protection)- silence or unenthusiastic applause. When he talked about the government spending money-louder applause. And when he talked about reauthorization of the VRA, which many in the crowd incorrectly think is necessary otherwise blacks won't be permitted to vote-wild applause. Conclusion: a reaffirmation that the NAACP remains stuck in the 1960s. Any wonder why younger blacks ignore it? Posted at 4:15 PM

Well, there's one thing we do know--it's not because they're flocking to the Republican Party.

Kathryn? Do us all a favor, sweetie, and don't lecture the blacks on shit you haven't got the faintest understanding of.

For the record, every one of those policies you think will help will actually make things significantly worse for the poorest among us, who, and believe me the NAACP knows this, happen to be disproportionately non-white.

Meanwhile, even *with* the Voting Rights Act in place, black people have been disenfranchised by the millions in elections right along. Redistricting, non-voting-felon laws, deliberately unequal polling place allocation, intimidation, lies, and outright fraud.

You really wonder why they're worried about what could happen *without* its protection?

Oh, those childish, naive black people. Don't they know that Massa Georgie is their fren? Why, look how easy it was for them to pull that ol' lever in Florida and Illinois, and no doubt lots of other places. Didn' need no VRA to git THOSE results, no sirree.

Repellent conclusions from an anonymous, bigoted applause meter. This is what passes for astute political analysis at NRO. For crap like this, Lopez is the female Goldberg, and it makes you wonder what the hell she would be doing for a living if NRO didn't need someone "ethnic."

I don't for a second put any stock in K-Lo's crowd watcher, but if the audience wasn't applauding Bush wildly enough to suit her, maybe it's because they've learned from experience to discern when they are being condescended to. And maybe because, beyond the obvious pandering applause lines, this one is really all about Bush. For anyone who hasn't read it and can stomach the idea, it can be found here.

I was just talking to an internet watcher about reactions to the president's speech today who noticed and noted: Whenever the President speaks before a crowd that hasn't been hand-picked, pre-screened, and coached to respond with enthusiasm to whatever he says, - the RightWing PoutMeter goes off the scale.

Conclusion: a reaffirmation that the RW WATBs remain pathetically obsessed with re-fighting their perceived Culture War of the 1960s. This time, won't the MSM please let us win?