I Have Some Shocking News. You Might Want To Sit Down First. Unless You're Self-Conscious About Your Height. 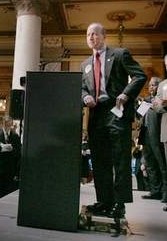 Gov. Mitch Daniels said today that he and First Lady Cheri Daniels will not live full-time in the newly renovated governor's residence on Meridian Street.

Let's recap: around about February of last year, shortly after Mitch "How's the Weather Down There?" Daniels took office, word got out that he was building a new palace in White as Wonder Bread Hamilton County, Indianapolis' unpleasant golf-playing Chamber of Commerce asshole brother-in-law to the north, and was staying in his current fortress until such time as that one was finished. Shortly after that, someone dug out The Law (a quaint set of guidelines much beloved by 20th century thinkers but irrelevant today) and pointed out that the Governor is supposed to "reside in the Seat of Government", which, no matter how much Republicans dislike the idea, is still the city of Indianapolis, home to numerous Negroes and feral cats. The Guv and his handlers seemed a bit surprised by the news, but managed to regain their composure by June or so. They issued a report saying the house was unliveable, though the previous governor had managed to endure it, and worse, hopelessly outdated. A solution was found which did not require Mitch to spend a single penny of his own hard-earned proceeds from fleecing former Indianapolis Water Company pensioners: the Governor's Residence was to become the 2006 Decorator's Showcase, and would be given a complete interior design make-over for charity.

Ah, but then it turned out the Commission charged with making it look like a commission, and not the Governor's shrewish Republican wife, was in charge of the redecoration announced it just couldn't reach an agreement with several of the possibly homosexually-inclined decorators who were donating their work, at least one of whom was insisting on Wildlife-themed wallpaper. So the deal fell through, but the brave Daniels household insisted it would muddle through somehow and move in the first of this year, no, make that February, no, make that sometime. And now make it never.

Quel surprise! you can almost hear one of the scapegoated decorators say (the long-term understanding is that decorators do not do anything which doesn't meet with the homeowner's approval). And it looks as though I'll never have to pay off on that standing offer (it reached $50) for a photo of First Lady Cheri walking the dog in that neighborhood after twilight, sans police escort or glare of teevee cameras. The money was safe all along. I never bet except on a sure thing.

Stories like this make me realize you got a real special boy there in Daniels. Geez, what a pud he is.

Fer Chrisssake, our governor's mansion has had bats for years, and the governors still live there.

Why does this story remind me of the George And Laura Redecorated The Lincoln Bedroom With Crowns thing? Republicans: Tacky Since Nancy.

A blogger out here in Seattle dubbed the Bushes "mansion trash."
I htink that captures the essence of rich rednecks quite nicely.

I'm a tad sensitive on the subject of height, being 5 fabulous feet tall myself. Daniels sounds like a prize piece of work. You don't have to make fun of a characteristic he has no control over to make your point.

heydave, calling daniels a pud doesn't do one-tenth of the justice that he deserves.

and golombek -- use your favorite search engine and find some pics of daniels. he has a horrible combover. and he wears contacts, which i find disgusting in a middle-aged man.

Harry - so make fun of his combover. I wasn't defending any of his actions, just sayin' it's a cheap shot to make jokes about his height. I didn't think it was funny when Rush Limbaugh ridiculed Robert Rubin either.

golombek -- i don't make fun of daniels' height, because it is a cheap shot. he can't help that, i don't mock people for things they can't change.

however, he can help having a napoleonic complex about his height.