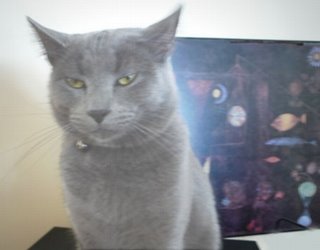 So for her birthday my Poor Wife wanted a new camera, a second stab at entering the digital age. The woman takes a huge number of pictures. Our dining room is somewhere under them.

After no small amount of research (mine) we agreed on the new Panasonic LX2, which, don't get me wrong, is not a camera I'd buy; I can't abide those teeny tiny things. We agreed it was the camera for her. I even dragged her to three camera stores to try to interest her in a DSLR; with each visit she chose progressively smaller cameras as her favorite.

My wife does three things with a camera. She takes compulsory snapshots of people so she can look at them later, when they're not around. She takes photos her drawing and painting classes can use as models, mostly plants and garden scenes, and sometimes cats or something else that strikes her fancy, as I once did. And she photographs student artwork, mostly for making slides.

It is, so far as I know, impossible to convince her that she needs at least two cameras for that stuff, and three would be better. After generations of having advertising hurled at them daily from morning alarm to late-night starlet interview Americans are simply incapable of believing that all design is a compromise. The Panasonic had one distinct advantage: it has a 16:9 aspect ratio (same as widescreen teevee; I think its predecessor the LX1 was the first digital to do so) and it gives you a 16:9 aspect through the viewfinder as well. My wife likes those panorama shots, and I have to admit that 16:9 is very cool.

Naturally, I'm the guy who winds up reading the manual, which runs to 135 pages, reminding me that during the Second Punic War I engaged in film photography after learning 1) the inverse square law and 2) what film speed numbers meant. I offer this as another rebuke to the Pangloss Theory of Economic and Technological Progress: now, in order to have a simple camera that doesn't require learning anything about before you take pictures, it is necessary to learn more than you ever needed to in the days when people found real photography too much trouble to learn. So after finding the requisite aftermarket items around town I started taking fully automatic snaps with the thing this afternoon so I could advise my wife and show her some samples. Naturally the cats were handy, and naturally the delay between shutter release and actual exposure which is a hallmark of those damned little ($400) toys resulted mostly in shots of them moving out of frame. Total crap shoot. (The compromise on the Panasonic is that it's even poorer than its cousins in low-light settings, and I'm allergic to flash photography.) 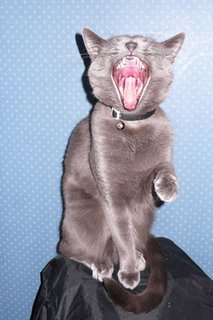 After about two hours of trying I got the out-of-focus shot of Larry, above (yeah, he's just about to take a swing at me), tweaked the shadows a bit in Photoshop, and presented my wife with the sample when she got home. She was completely bored by the technical aspects of my presentation (yeah, it came as a shock to me, too) and wanted to grab the camera and snap some pics. I showed her how to turn on the flash and what the automatic setting looked like, and then she cornered Larry, clicked the shutter, and the little red light came on, and I started to explain that she'd never get a good picture because of the delay, and as I'm saying this in my I've-got-the-answers voice the goddam cat decides he's going to yawn and the flash catches him at its peak. With raised paw, just to rub my nose in it. That's the first picture she took with the thing. I'm thinking of letting the little bastard escape tomorrow.

Poor wife's picture will be a great one for her students who are interested in biology illustrations. (I don't believe I've ever seen a cat larynx before.) Yours is great, too...Hold on, I'm not pandering...It's Larry's expression. We've got a cat that could be Larry's twin, if ours lost about 5 pounds, and I've seen that look before.

The delay is the single most maddening thing about digital cameras, and the reason that I now use mine mostly for landscape shots (although many of these are blurred by the rotation of the Earth on its axis).

I remember thinking, the first time I tried to take candid snaps, that if Robert Capa had taken a digital camera to Spain, his most famous photo would the corpse of a Loyalist soldier lying peacefully on a hillside.

Hey, I prefer yours. But then, I can't abide flash photography either.

Cats are the living embodiment of the rule that says the perversity of the universe tends toward a maximum.

Scott and Doghouse, most of the shutter lag is the result of the camera's time-consuming attempt to focus the shot for you (if you're auto focusing).

So, many cameras have a prefocus function, usually accomplished by pressing the shutter release half-way down (once you've sighted on the subject).

This will shorten the delay on subsequent shots (assuming they're of the same subject at the same distance).

See if your camera is one of those with this feature. Hope this helps.

Did you Photoshop Larry to make him look even more malevolent in that first picture? Or is this how my cat looks in that moment when I think we're through playing and turn away just as he decides to strike?

You're right about the prefocus feature. My problem -- besides a heavy shutter finger -- is that I only get one chance at a candid shot with the kitties; the instant the flash goes off, they scream, "Paparazzi!" and bolt blindly out of the room.

And I don't want to be responsible for them suffering the same fate as Princess Di.

And Chris, thanks--I think there may be a prefocus feature, which wouldn't help much with Larry since he rarely sits still. I was shooting full auto since that's probably all my wife will ever use and it was just a shakedown run for her. Pretty good camera, overall; I'd probably enjoy it if it were large enough to pick up without a jeweler's loup.

I'd been idly wondering for some time if an infrared flash exists or could be built. Digital cams are sensitive to light in that range and humans aren't, so nobody will blink or throw a joe (pardon, an epileptic seizure) when it goes off.

So, of course, now I'm idly wondering if cats are sensitive to infrared.

Could somebody point a TV remote control at a cat, push a button and let me know if he responds? Uh, giving you the "God you are such a moron" look doesn't count.

Incidentally, that's ChrisV's handy TV repair tip for the day: if you think your TV/DVD/etc remote control isn't working, point it at your digital cam and push a button. The result should be visible on the digicam output.

This in no way diminishes my love of kittycats.