No Man Is An Island, But Some Men Could Serve As Personal Floatation Devices Without Much In The Way Of Modification 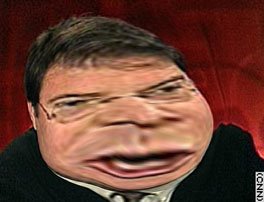 I am, actually, a bit under the weather, enough so that I seem to have imagined that taking my head for a swim via a Jonah Goldberg column might counteract an impolitic large intestine. I tried something similar once when an amusement park ride made me queasy. No luck then, either.

Maybe I’m remembering this wrong. But I could have sworn we spent the last seven years talking about how the Republican party is the party of backward red states—where hate is a family value, fluffy animals are shot, and God is everyone’s co-pilot—and how the Democratic party is the avant-garde of the peace-loving, Europe-copycatting blue states, where Christianity is a troubling “lifestyle choice,” animals are for hugging, and hate is never, ever a family value.

Admittedly, over time the red state-blue state thing was eclipsed by other clichés about how the GOP had been hijacked by “theocrats” or by K Street corporate lickspittles, warmongers, immigrant-haters, hurricane-ignoring nincompoops, and, for a moment during the Mark Foley scandal, cybersex offenders. I can dredge up all the relevant quotes, but if you’ve been paying attention, I shouldn’t have to.

Every week or two I check, and every week or two I'm surprised once again to learn that Goucher College hasn't faked its own death, dyed its hair, and slipped off to South America with the insurance money.

Here’s the interesting bit: The GOP rank and file is steadfastly refusing to play to type. The frontrunner in most polls is Rudy Giuliani, a pro-choice, anti-gun, immigration-expansionist former mayor of the capital of Blue America, New York City. Just last weekend, Giuliani finished a close second in the CPAC straw poll of conservative activists (and first if you add the activists’ first-choice and second-choice ballots).

Okay, I have been saying for the past four years that the Religious Right, having caved in on Republican nominees between 1988 and 2000, before adopting George W. as one of their own, resulting in severe burns, would name the 2008 nominee or die trying, since it wasn't going to get any easier after that. In 2004 they bought into the Values Voters schtick, which, as I recall, was a cliché much prized by the Em Ess Em and the right punditocracy (I can dredge up all the relevant quotes, but I don't want to), plus the genesis of a humming little cottage industry for a couple of left-wing Catholic girls. Then rest of the country got to know Mark Foley the way the Republican leadership knew him. The religious right had enough power in January 2005 to interrupt a Presidential vacation, something a Category V hurricane wouldn't be able to do nine months later. When the anti-Schiavo backlash hit some of your more savvy Tax Cut Republicans woke up, smelled the last quarter century, and reacted with alarm (either mock or sham; the jury's still out). The Metaphysical Certainty wing of the Party That Knows Best reacted in standard GOP fashion when confronted by uncomfortable, undeniable realities: it doubled down, and took out Bill Frist and Jeb Bush before the campaign ever started, just for pique. And of course you've had Ted Haggard and Ralph Reed and Pat Robinson helping raise public awareness in the interim. It looks like Do or Die will wind up as the latter, don't it?

But let's hold on, here. Hain't nobuddy cast a vote yet, 'cept by tellerphone, and already two of the three Republican frontrunners have swerved so far right we'll have to identify their charred remains from the dental records. McCain is dead, he just hasn't fallen down yet, and with all that money in back of him that won't be for a while, barring utter humiliation early. And he's assembled the same team that pummeled him to death in South Carolina in 2000. Remember? Or is everybody on the Right suddenly civil in public now?

McCain's folks think Rudy will be coming back to the pack once voters get to know him. I doubt they imagine that will happen without some assistance on their part. Mitt already has indicated an understanding that he can't wait forever for his Jim Rockford-esque 180º to pay off. It is perhaps enough to note that at this point there aren't many Republican candidates veering leftward.

To which Rudy, wisely to this point, has said little beyond that "strict constructionist" gag he apparently thought would mollify 25% of anti-abortion voters and verbally confuse the remainder. He's been especially lucky in his choice of Bumbler McCain as his major opponent (no less a spokesman for the Red Meat wing than Rick Santorum recently said, "Anybody but McCain", despite the fact that McCain has the closest thing to Santorum's voting record this side of Sam Brownback). Will he get away with that for eighteen months? Will "Values Voters" forget the whole Gay Marriage Misunderstanding in order to vote for the Soviet-heroic statue of Mr. 9/11? I doubt it, but then I took the Persians at Thermopylae and gave the points.

(Speaking of Brownback, what he's up to is anybody's guess but he hasn't Rudy's name recognition, and he hasn't been raising money unhindered by public office or private morals for the last six years. He could do worse than stand back and let everybody else snipe at Giuliani through the rest of the Hot Stove season. Maybe there's at least one Republican who's learned something from the Iraqi insurgency.)

Still there's a couple of things. It's a nice "conservative" wet dream to have Rudy waltz through the primaries with his electability intact, which he will only do if it's decided early. But if it's decided early the Religious Right will not be on board (the rank and file anti-Queers- and Dirty-Hippies-voters may not know Rudy yet, but the James Dobsons sure do, and they'll take that flesh in one-pound packages, thanks). And, Jonah, the whole point is you can't win without 'em. They can't guarantee a win, but they sure can guarantee a loss.

This is the final pre-conscious spasm of the Rudy Wet Dream, that the Republican party can jettison all those rabid-right voters Jonah wills into invisibility until he needs them again, and govern from the Center without otherwise moving a muscle. And may I say (oh, shit, I almost forgot I'm obligated to give you the Grand Weasel Flambé Finale:)

Lastly, perhaps the GOP is self-correcting. The exaggerations notwithstanding, perhaps the rank and file is reining in the party establishment. The Republican party is undergoing a seismic shift, prioritizing foreign policy in ways not seen since the height of the Cold War. In response, the usual rules are being rewritten.

Or maybe it’s just too soon and this is all about name recognition. But whatever the real story is, you can be sure that won’t be the story line you hear from the press.

Happy, now? Is the GOP self-correcting? Or just out of options? Wake me when they're willing to admit when they're wrong. I could use the rest.

His column today in the LA Times sucked so hard, I felt my soul escaping my body.

Goldberg? Goldberg? Where have I heard that name before? Goldberg...

...I remember there was a Lucy Goldberg from the 60's who the Republicans paid to svck and fvck Democrat politicians as part of a dirty tricks campaign. But that wouldn't be the same Goldberg, would it? "Trixie," I think they called her. "Trixie" Goldberg is li'l Jonah's mama? Well, raise my rent...who woulda thunk it?