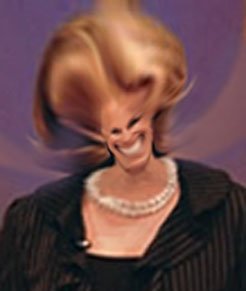 You may have already guessed but watching 60 Minutes is not something I'm likely to do. Watching 60 Minutes cover another political-couple story made necessary by the sorts of questions the sorts of people who are "stars" of 60 Minutes are asking is slightly less likely than my drinking unfiltered water from a backcountry stream twenty yards downstream from a half-decayed bull moose. Now add in Katie Couric; I would have had to have fallen off the couch facing the set which was tuned to CBS--which would mean not only that they were broadcasting sports, but that I couldn't get the game on the radio and so avoid their stable of annoying announcers--shattering both hips in the process and somehow immobilizing both arms so I couldn't claw my own eyes out, and even then I would try to chew my way across the carpet in hopes of battering the television off its stand or gnawing my way through the power cord.

So, no, I didn't see Katie's interview with the Edwardseses, And I still have water in the basement, new seed on the lawn, and business with the Indiana Bureau of Motor Vehicles (Motto: "Get The Sort of Service You'd Expect From a Republican Businessman, If That's Not Redundant".) It wasn't until last night I heard Olbermann mention the "Some People Say" routine that I gave it any thought. And I don't really have time now to really sort this out, but off the top of my head:

• I do not believe America, whatever her faults, deserves Anna Nicole Dead or Alive as an object of fascination, however slight and however mildly retarded.

• I do not believe America deserves Alberto Gonzales as Attorney General, and not because he lied like a philandering husband when he knew the truth would be out within a day. He's a Bush official. Lying is how they take in oxygen. I've lived through petty criminals and leg-breakers in that office a third of my life: John Mitchell, William French Smith, Ed Meese, but they, at least, gave the impression of having law degrees, even if they were questionable.

• I know I'm not the first person to make this argument, but Fuck fuckin' Katie Couric.

Okay, so the culture is not her doing, specifically. The fact that a couple like John and Elizabeth Edwards, who presumably rank somewhere between About As Ethical As You Can Expect In An American and Possibly Somewhat More Noble Than We Deserve Or Is Good For Them must go on teevee like some Largely Unfunny Comedian Trying To Salvage His Career After Shouting 'Nigger' is not Katie's fault, but she feeds on the carcass. It's obvious that Katie could not risk being seen as aiding a possible Edwards Nobility Ploy. Fair enough. But remember that.

Remember that we are at the point in our public discourse where even if Katie Couric could find "gravitas" in the dictionary after being spotted the G, R, and A, there was no way she could conduct that interview without probing the Edwardeses for some sign of Unseemly Ego or Shameless Self-Promotion. Which, of course, is coming from someone who's had more image consultants than your or I have had coffee mugs, and who used her husband's death to promote colorectal cancer awareness without anybody asking what was in it for her. Remember we got the breathless results of overnight polling on whether American thought this was the Right Decision, like it's America's fucking business, or like "Why don't you find something important to ask about?" was one of the choices. That didn't come from Edwards. It's like polling the block about your neighbor's new haircut.

If it's fair it's fair, but this still begs a couple of questions: can't you ask about the decision the way, say, a normal human being would, instead of in a way designed to prove your journalistic credentials to people who hate John Edwards because he's a) a Democrat; b) a Democrat and a lawyer; or c) a Democrat, a lawyer, and a Presidential candidate? I mean, what the hell did John and Elizabeth Edwards ever do besides being hated by Coulter and Limbaugh, which is about as difficult, and as meaningful, as making a sock smell bad? The Edwardeses were treated with less civility than a Largely Unfunny Comedian Who'd Grabbed Her Crotch and Spit While Shrieking The National Anthem In Public. Because, presumably, someone who has a career to salvage after a bout of televised boorishness will be totally honest with the public, whereas people with cancer are always lyin' just to get sympathy. If it's fair it's fair. Just shaddup about fuckin' Bush Hatred, and Civility, and let's start treating everybody this way and not just the undeserving.

Labels: Does The Media Really Need More Than One Neck?
Email ThisBlogThis!Share to TwitterShare to FacebookShare to Pinterest

And then they had to fucking *thank* Katie for doing it or be further berated for *their* manners.

I spent Sunday watching Planet Earth which, admittedly, was edited to within an inch of its life for The Discovery Channel, but at least was shown on the HD channel, unlike back when it was on CBC. And if the DVDs I made my partner pre-order for me turn out to be the American version rather than the BBC version, it's going right back to the store, Sigourney Weaver or no. Sixty Minutes? Does *anyone* bother anymore?

DR, you are the greatest.

I used to be neutral about Katie C, but now that she's a "serious" journalist, I hate her with the burning passion of a thousand suns.

has there been journalistic integrity since Nixon or Reagan? If there has, it has all gone the way of Coulter and the Drug Addict.
I don't watch local news anymore (since they don't seem to understand that I want NEWS not "human interest" stories) and when I watch the natinal news I spend much of it yelling at the television -- for all the good that does.
and I remember Dennis Miller before he lost his mind -- he used to be quite amusing but that was more than 20 years ago.