Today In Making Up History As You Go Along 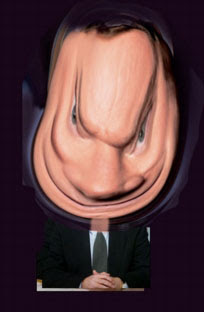 September 8, 2002: The Sunday News Show Official First Anniversary of 9/11. Dick Cheney, TIm Russert's regular co-host, uses that morning's Michael Gordon/Judy Miller front-page centrifuge story, stovepiped from his own office, as evidence that the administration's "Sorry We Can't Tell You What the Evidence Is" is backed by evidence. Rumsfeld performs the same function on Face the Nation. On CNN Condi utters the immortal "smoking gun in the shape of a mushroom cloud" and claims the aluminum tubes "are only really suited for nuclear weapons programs." Colin Powell, on FAUX, says the UN inspectors were awright, he supposes, but we really learned how much they'd missed once we started talking to Iraqi defectors.

Reading the Meet the Press transcript--call me a sentimentalist--I was struck, not by Russet's waterlogged questioning--a given--but by Cheney's answer when Timmy got around to sorta kinda hinting that Iraq couldn't employ WMDs without, you know, kinda being utterly destroyed within twenty seconds in response. Here's the Dick:

Who did the anthrax attack last fall, Tim? We don’t know.

There's a fine bit of lathe work in the Amy Goodman/Bill Moyers PBS piece on selling the Iraq war when Moyers interviews Russert on how Cheney came to be on the show the very morning the centrifuge story turned up. And Russert says he had no idea what was coming, etc. etc. And they end with a 1-shot of this colossal mound of ego, whose thirty-five years in television journalism has atrophied his sense of Right and Wrong and True and False--the man is, at one and the same time, a pathetically bad liar, maybe the worst since Nixon, and a wizened prostitute--who says, by golly, we now know there were people in the Administration who were raising questions about the evidence, and I sure wish they'd have given me a call.

They cut to CBS' Bob Simon, reporting that he'd called various experts on nuclear weapons programs and been told that the story was dubious at best. And Simon replies to Moyer's question that, yes, most of these experts would have been available to talk to anybody.

Of course your guess as to whether Russert ever even dials any of his own phone calls is as good as mine. The man is not now nor has he ever been a reporter; he's a zeitgeist technician, and if he has a reporter's inclination to check sources the results have thus far evaded detection. Perhaps there wasn't enough time to check the Times story before air, just as--darn it!--there wasn't enough time for someone to ring his phone. You or I might be forgiven for imagining the whole story was a bit too convenient, perhaps even obviously so, but Tim is bound by the Sacred Obligation of Faux-Balance not to object unless he's quoting someone else who did it for him. We might quibble that Jonathan Landay and Warren Strobel of Knight-Ridder had actually done that, having cast serious doubts on the administration story two days earlier, but surely it's not Russert's job to read the out-of-town papers?

No, we're not master carvers like Moyers. We're butchers and hacksaw artistes, and we have to look at Cheney's reply again:

Who did the anthrax attack last fall, Tim? We don’t know.

It is September 8, 2002, and anyone who'd followed the story beyond the original headlines knew this: 1) that anthrax and other biological agents are not "Weapons of Mass Destruction"; 2) that, assuming Saddam Hussein could have accumulated enough to cause a blizzard in Tel Aviv, which he couldn't, and found some way to deliver it, which likewise, it still wouldn't have caused Nagasaki numbers of deaths; 3) that the anthrax in question was directly traceable to a US biological weapons program we'd claimed to have dismantled thirty years earlier. And all of this preserves the bald-faced fiction that we'd have demanded proof in the face of an actual attack when rumor was plenty sufficient in its absence.

Russert had no follow-up to the response. Oops, I should have warned you to sit down first.

Hey, your blog-post entitling skills are, now more than ever, en fuuueeego!

By the way, and apropos of absolutely not much, your reference to "mushroom clouds" made me think of shopping, which made me think of the jewelry store anecdote concerning Secretary 'Shroom herself, in which she allegedly pummels (verbally) a hapless store clerk who brings out an insufficiently expensive bit of finery for Herself to look at. Oh, god, I know how irrelevant this is and how shallow I am (nobody does shallow better than me), but I think that anecdote sounds bogus.

I can picture Rice giving a highly effective Death Glare, or coldly requesting to see the manager, but is she really going to swat that fly?* ** (Note: I have been that retail-employee fly, and I have been swatted, once even by a celebrity [Carlos "Twerp" Santana]. There may have been other celebrities, but I have the power of repression.)

Russert is a vastly overpaid TV hack. He's no more a journalist than Howie Mandel—since when does reporting consist of waiting for the phone to ring? His Hannity-like game of gotcha with politicians he doesn't like, and public fellatio on those he does (liberal Democrats and administration officials respectively) is its own parody. Journalism? Can anyone think of one story that Russert has broken in the past 6 years? Hell, he didn't even break the news of his own involvement in the Wilson/Plame story, and that was news by any definition. That he could "interview" administration flacks on the subject with a conflict of interest a massive as his Buffalo butt shows he isn't too well-stocked in the integrity department either.

Although I have to admire his sucky genius in getting so many Chicken Soup for Daddies rubes to write his latest best-seller for him.

Hey, no snarky remarks about Buffalo, assuming you were referring to Bison bison.

Cheney wonders: "Who did the anthrax attack last fall, Tim? We don’t know."

"Well, it'd have to be one of our domestic right wing nuts, wouldn't it, since the envelopes containing the anthrax were all addressed to democratic members of congress. Right, DICK?