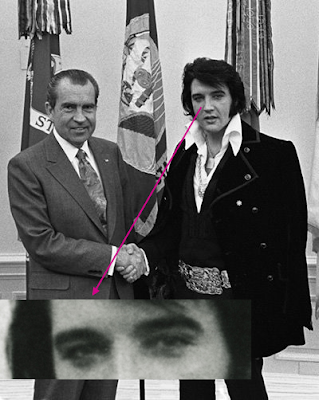 IS it just a coincidence that the past seven days, when Creepshow America threatened to reach a critical mass, began with still more "revelations" about its onetime Pope (how is it even possible to further reveal Richard Milhous Nixon? Oh, my, he was a racist? Smelling salts, stat!)? I know I'm repeating myself, but in a country where Gallup reports 109% of the populace claim a belief in God and thrice-weekly church attendance, where 80% doubt the foundations of modern Biology, and 65% check their horoscopes at least twice weekly (the last a more reliable statistic, by the way, since it's the one that jibes most closely with the cracked pitcher of corn beer of observed public behavior), shouldn't there be some supermajority-inspired internal brake on tempting God like that? Hell, I'm no true believer, but if you got me on the witness stand there's no way I'd completely rule out a connection between Dick Cheney being given yet another shot at the public forum he disdained when he was an actual newsmaker and children being scalded in horrible kitchen mishaps.

Could we at least aim for some consistency? Your new toaster warns you not to take it with you into the shower; The "History" Channel warns you, respectively, that it has no responsibility to leaven any of its sixty-seven part Nostradamus series with the rationality of the intervening centuries, and that its coverage of Nazi concentration camps may be objectionable to some viewers (though in a perfect world, they'd warn you a) the guy sitting next to you on the bus tomorrow morning might actually believe this shit; and b) scenes of the Nazi holocaust might actually not be objectionable to some viewers, and their votes count too). Of the two, of course, the toaster manufacturer is attempting to limit legal liability, and so is more thorough, more careful, and more accurately reflective of the mentality of the public at large than are the purveyors of public information, or "information", who pretty much just try to pre-empt the sort of person who might mail them some anthrax spores. Which, odds are, would be inhaled only by people in the mailroom or the secretaries of the underlings and henchexecutives of the intended target, so what th' hell? I've noticed--as I'm sure you have--despite my habitual attempts to simply avoid the television during these wall-to-wall carnivals that some Jackson family member--even the despicable Joe--will pop up with absolutely no warning whatsoever, and no concern for the millions of viewers who might be eating, casting a horoscope, or begetting some latter-day Tristram Shandy.

Maybe it's time the dead started showing us a little respect. It's damned sure the networks won't.

And maybe it's time that religious freedom came with an analogue to plagiarism or tendentious speech: if you claim an abiding respect for the wisdom of illiterate Bronze Age provincials, yet tempt the Evil Eye, you ought to be liable for damages.

Of course it's not all bad news, by which we do not mean the comic relief of pathetically wrong-footed Republico-Christian sex bloopers and the premature pundits who rushed to excuse their amour fou before the ugly details could find the fan. The Iraqi people are welcoming somebody as liberators, finally, which the networks took as their cue to start noticing the violence in Iraq once again. Minnesota now has two Senators, just like North Dakota, though why you or I should be concerned when it obviously wasn't I can't say. And--the Republic is Saved!--the World's Third-Worst State Legislature™ passed a two-year special session budget ("With just seven hours to spare!"), a mizzable crapload which will continue the fiscal Balkanization of urban school districts while merely underfunding most of the rest, thanks to a complete cave-in by Indiana's Republican-Democrats. The budget will provide Governor Mitch "The Bantom Menace" Daniels with the continuing $1 billion "surplus" he needs as a booster seat for his Presidential campaign chair, while continuing the process of infrastructure neglect and corporate giveaways which will suddenly be "recognized" only after he's gone away. (This, of course, despite the fact that back when he had hold of the national budget joystick the Bush administration was describing a budget surplus as the stolen wages of hard-working taxpayers being banked for no-good spending schemes.) The good news there is that the local hairdos are through issuing hourly scare bulletins about the imminent shutdown of the State Park System--which would have been abandoned to Nature, evidently; this was the scariest thing they could think of--and will now begin talking about what is actually in the bill that was passed. (My personal favorite: Channel 6 regaled the credulous with a story of how Our Tax Generating and Gainful-Employment-Providing Casinos Will Be Forced To Shut Down! which not only seemed to take every single one of its "facts" straight from the Gaming Industry's lobbying brochure and unlimited buffet for two coupon, but which ended with a wholly gratuitous ten seconds of some virtual blackjack dealer with the cantilevered 46EEE bosom of the terminally juvenile video gamer's dreams. Then back to the female co-anchor.) Not that discussing the boring old particulars'll go on very long, or get any deeper than the Mighty White River in August. Or interrupt any of the "Michael Jackson is from Gary!" stories coming from people who'd just as soon deed Gary to Illinois for $1 otherwise.