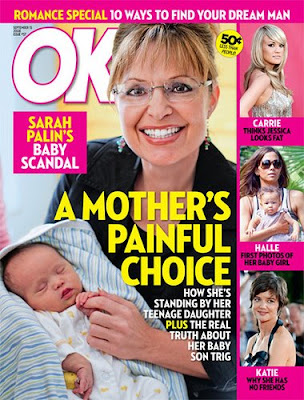 photo courtesy Okie Week.
LISTEN, it's not as if you weren't warned. If the visionaries (McLuhan, Warhol) were just a little too comfortable with the whole thing, enthusiastic, even, and if the genuine prophets of doom made comedy albums on Columbia (Dear History Channel: You can't interrupt weekend Nostradamus marathons for one solitary hour of Firesign Theatre?); if the original Star Trek would be seen at the time, and understandably, as Just More Shit from the Shitbox (it was an age when grown men did not have the luxury of perpetual juvenility); well, how did you miss that fact that the first Million Dollar News Anchor couldn't speak English? (Didn't Nostradamus predict that?:

And a Weader will awise in the centa of da wowld,
And jab the hairy Reasoner in the Eye.
In her mouth there will be fiery spheres of marble,
And she will show the world a New Madonna and the Real Twavolta.

[historians have generally assumed that Nostradamus dragged his sleeve through the fresh ink at the end of that last line.] )

Of couse, if one Bawbwa wasn't enough to get the message across, what th' fuck did people who listened to Brokaw think they were hearing? Then we ewect (sorry, it's catching) a C-list actor who wore more makeup than Bette Davis, because he was "real", and because "he could communicate", something he had never been celebrated for when emoting was his actual job description. From there it growed like Topsy, if Topsy had had acromegaly. The guy who said "trees cause polution", "facts are stupid", and "shut up and eat your ketchup" was praised for his straight talk; the guy who sold drugs to finance his South American death squad gun-running scheme is now hailed as History's Greatest Patriot; the guy who quadrupled the Federal Debt buying every piece of high-tech military crap, with or without an imaginary need, is now the Godfather of Small Government. And, beginning January 21, 1981, when, after less than 24 hours in office, Ronald Reagan negotiated the release of the Iranian hostages, the party which flies the banner of A Return to the Golden Age when Right and Wrong Were Clearly Understood has attempted to do so by basically Lying About Everything. And not in the partisan, hyperbolic, sense; the ensuing decades have proven over and over that there is literally nothing whatsoever Republicans will not say, and nothing which they can say which will not be reported as the voice of the loyal opposition. Which, as we might have expected, included those times when they were undeniably in control of all aspects of government, and involved presenting their tiniest political resentments as hypertrophic grievances.

Which brings us to Sarah Palin, at least long enough to say, Fuck it, she's your problem if you want her. I'm on my last leg, literally, and, frankly, I've seen enough. Perhaps it is a sign of progress that a bad actor with bag of clichés and a room-temperature IQ hasn't gotten away with it the way Reagan did. Or maybe that's just good luck and a timing born of the slow realization of what that first sportscasting moron wrought. At any rate, it's time for all those New Voters to step up and put an end to this crap.

And it occurs to me that the proper place to start is that cult of the demi-personality the Clotheshorse from Wasilla is able to manipulate despite her obvious mental incapacity. As if having genuine one-time celebrities who were the butt--literally, the butt--of jokes five minutes earlier lionized because they happened to die through unauthorized lethal injection isn't damaging enough to a nation's psyche, the Associated Press eulogized Billy Mays as "a pop culture icon". This has to be regarded as the sort of omen for a culture that mass amphibian birth defects are for an ecosystem. The guy sold crappy household products to shut-ins. He wasn't the first. There's a possibility he was the loudest. If this merits a front-page Times link then I see no reason why Sarah Palin shouldn't be the next President of the United States. Followed by Larry the Cable Guy. Or David Beckham. Just don't blame me. I've developed an immunity to feces-born pathogens over the last twenty-five years. By necessity.

At least Mrs. Palin's, er, gyrations, have driven the corpses of Michael Jackson and the loud pitchman from the air for a short while.
This would be a good cue for Frank Zappa's "I am the Slime"
http://www.youtube.com/watch?v=6EQtrW2ZSyE

Take it away, Don Pardo.

At the Corner, the communicable-even-with-a-condom VDH hopes that Sarah Palin will put her time in self-imposed exile to good use -- "study[ing] foreign policy...Lectur[ing]" and ultimately emerge from her chrysalis an Iron Butterfly:

the key [to Palin's political future] is whether she convinces conservatives in eight year of travel and reflection that she's a charismatic Margaret Thatcher type heavyweight.

I for one will never forget how Maggie was catapulted to 10 Downing Street by that be-Spandexed pictorial in Swaggerer's World magazine.

Something's happened to me. I think I've been, I don't know, won over. I tried incredulity with Reagan and Ed Meese and so on, and nobody cracked; they just named shit after him. They're still trying. Then eight years of Bush Jr.and still people, they...they shrug, they smile and talk on. What do they know that I don't know? I feel myself slipping. Polls say only 1 in 5 Americans believe like forty things, yet those forty are what everybody in earshot is talking about. Without a hint of irony. How can that be? Is it me? Now Palin--not Micheal, whom I would vote for in a moment...remember him jiggling the postcard on SNL from New Orleans? Don't care who you are, that was funny. Sarah, with a straight face etc., and people on TV are nodding sagely. Sagely! I'm slipping. Key-shaped cake! She is hot. Boehner, the tan man, looks me in the eye! I'm slipping! How could it be?

Sometimes I wish we had royalty in the US, just so our celebrity-obsessed culture would focus on just one defined set of sociopathic/moneyed/narcisstic fuckwits and their efforts to control government/culture. But then I realize it hasn't worked out that well in Britain either.

Hey....you guys are all just elitists! Elitists, I tell you. Sarah is the voice of AMURIKA.

I wish it was easier to emigrate to New Zealand. I want to be a long way away. (lol)

That is it. We have completely lost it. I thought eight goddamn years of Bush,Jr. was enough--you must remember I am in Texas we had eight and then eight more of that stupid son of a bitch and that isn't just a clever expression. But no. Michael Jackson is the indication that we as a people have jumped the fucking shark. Nothing, nothing we could do would even come close to this idiocy. Civilization as we know it is over, we have given our lives over to a dead child molester. I thought the president was using some poor judgment going on about Kobe the rapist Bryant but no. Michael Jackson.

Has he risen yet? Will there be Jackson sightings like Elvis sightings? Is he the Black Jesus?

Palin was the perfect example of everything wrong with America but now deadbeat, dead child molester Michael Jackson is the most important goddamn person in the fucking world.

I am putting my television on the curb.