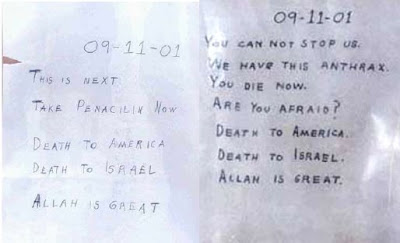 Devlin Barrett, "US on verge of closing anthrax probe after 8 years". July 27

I GOTTA admit that after six-and-a-half years of screaming about how quickly the Terrorist Anthrax Attack on America Herself faded from view once it became clear* that it was a Domestic terror attack, I pretty much stopped reading about it myself a year ago, when it became obvious the FBI had pinned the thing on a dead guy. So it was actually new information for me, when I watched Hunting the Anthrax Killer on the National Geographic Network Sunday night, that they'd tumbled onto the late Dr. Ivins because he'd (allegedly) provided a fake sample of the spores he'd been working with, and because the real sample, like the spores used in the attacks, contained silicon, which all the others did not.

Item: it's the largest, most expensive manhunt in history. Item: within days--hours, maybe--of the attacks on Congress they knew it was the Ames strain, and they knew that meant the US was the source. Item: read those notes above--they were written by Arab Terrorists the same way Jonah Goldberg is ghostwritten by Gabriel Garcia Marquez.

Yes, yes, yes; an investigation that narrows its focus early will frequently live to regret it, but this one had unlimited fucking funding, and it's not like the "foreign power" angle was going to be tossed out on its ear anyway; but at some point, possessing the information that the strain of anthrax used in the attacks was ours, and, so far as we knew, ours alone,** and having read those letters, someone in authority made the decision to continue pumping resources toward proving it was The Ruskies or that Saddam guy, on the grounds that the light was better there. This is not exactly reassuring.

The program reminded us, too, that the focus on Steven Hatfill, like the earlier focus on Ayaad Assaad--though ultimately much more expensive--was entirely the result of Tipster Bingo. Which means that once the lab boys were finished we could have cut costs by reducing the investigation to a couple of secretaries.

Sure, sure, hindsight's 20/20, and I have absolutely no idea what I'm talking about, but look: word that they'd found the Ames strain--and the erroneous story that the Congressional anthrax was "weaponized"--was going around by November, 2001. So were the whispers that when we "stopped" our bioweapons program at Nixon's order in 1969 it didn't mean we, like, stopped or anything. And it's almost precisely at this point that public hysteria--remember, bioweapons was the "active" scare, unamenable to security measures, unlike air travel--disappears, the door slams shut, there's a guard posted, and everyone else sorta wanders away. In December the Baltimore Sun officially breaks the story that the US has an active dry-anthrax (i.e. weapons) program, Tom "Limousine Liberal" Daschle says it looks like someone connected to the US military is responsible, and George W. Bush says "We'll keep you informed as developments arise," which are essentially his last words on the subject, at least until John "Bring Me The Credit Card Overdrafts of 100 Arabic-Sounding Legal Aliens" Ashcroft nails Dr. Hatfill in public. From this point it's difficult to find much reporting on the case except that of the Judith Miller Times, the fun-loving genocidists at WaPo, and the tub-thumpers at The Weekly Standard, whose insistence that it was the work of Saddam & Al-Qaeda, LLC., should have been enough to convince all sane people that it couldn't possibly be. Judy and the Posters were still hawking that angle a year later, even after the spotlight had been turned on Hatfill, and Hoosier Attack Representative Mike Pence had written to Ashcroft, asking if he'd please, please get the investigative focus back on Saddam Hussein?

In other words, just months after the anthrax attacks continued, and amplified, the Justification of the Global War of Civilizations and Shitting Your Pants, the administration's henchmen were lying outright about the case despite its earth-shaking consequences. Our Way of Life hangs in the balance, according the them, and they're busy playing politics (yeah, shocking, I know; but how much worse is the refusal to investigate?). Our own biological weapons program, the one that didn't exist, is effectively ignored when it comes time to consider just how evil Saddam Hussein, bioweapons aspirant, truly is. And it takes six years after completion of the DNA and chemical profiles of the strain to locate it among a finite number of samples in domestic labs, or, coincidentally, just unto the beginning of the next Presidential campaign.

I dunno if it was Ivins. Opinions vary. If the science is to be believed there's more than a strong suggestion from the provenance of his working materials, but it's not my fault the Bureau's lab work is perpetually clouded in suspicion. It is a case where the Lone Nut theory seems plausible. I've got a little problem with the proffered motive--that Ivins' anthrax vaccine was being blamed for Gulf War Syndrome, and was no longer being administered to the troops, and he wanted it reinstated--but then you don't have to prove motive. Whether they could prove the rest of it is moot. But all that's a lot less interesting to me than how the story, and the panic, was manipulated, and how easily it was dropped when the truth hit close to home.

Then again, the other thing that interests me is why Cheri "Home Alone" Daniels, later First Lady of Hoosierland, alone among Cabinet-level Spouses and Miscellaneous Dependents, was mailed a supposedly bulging envelope of what turned out to be talc while her hubby was in D.C. single-handedly wrecking the US economy. But maybe that's just me. And maybe we'll get the answers during the 2012 Presidential campaign, eh Mitch?

Well, after having embarrassed myself repeatedly on this site today, I still have to say:

I absolutely love (not even in a manly way) your writing style.

You're the only thing keeping me from insanity or senility.

I have always figured it was Hatfill. I watching still watching a little TV, back in the days when he was accused, and some guy said he and Oliver North could vouch that Steven Hatfill was a patriot.

To my mind, anyone Ollie North considers a patriot is just the kind of creep who'd come up with a scheme like this. Guilt by association.