Because It's My Blog, That's Why 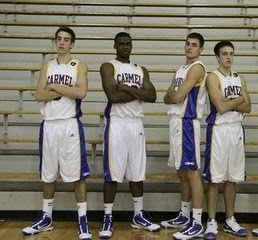 Bob Kravitz, "Here's where the responsibility belongs: If allegations are true, perpetrators are the only ones to blame". May 18 [note: link to hyper-valuable Indianapolis Racist Beacon* material subject to expire in twenty minutes]

OUR story so far: sleepy farm-market village (Carmel, IN) north of Indianapolis grows explosively from 1960-2000 thanks to White Flight, Federally-funded, conveniently located interstate ring around Marion county, and Republican "zoning" "laws". (The population boom continued into the Naughts, but in part because it annexed every bit of unincorporated land that didn't have the money to defend itself.) Becomes the wealthiest city in the wealthiest county in the state, and even more Republican, though only about as white as it ever was. Or could be theoretically.

Now, much of what follows is even ranker speculation than is normal around here, sprinkled liberally (get it?) with class envy. And the simple reason for that--okay, the former--is that these are not the sort of people who volunteer information, or generally have it demanded of them by investigative reporters, police interrogators, or an opposition party. So, to begin with, back when I was in high school the town had a population of around 6500. Today it is almost 70,000 (they bought themselves a Special Census back in Naught Seven so they could gobble up more tax revenues. Republicans.) and the high school's almost the size the town was back when. Because it's still the same high school, expanded several times; it's whispered in educational circles ** that the intention is to maintain the benefits of super-sizing in athletic and other competitive, trophy-awarding educational tussles.

So: last February it suddenly became public knowledge that some sort of "hazing" incident had occurred on a Carmel bus heading home from a boy's basketball game in southern Indiana a month before. And that, as a result of this information--which had come to light only because schoolyard gossip had gotten back to some parents--three seniors had been thrown off the team. Rumors did what rumors do: they swirled, enough to disturb the slumber of the Local Media, which stuck a microphone in front of the principal so he could announce--this is not speculation, but observation--that the incident hadn't risen to the level of criminal behavior, that the suspensions were the appropriate and sufficient response, and there was nothing more to see here, folks.

But among the rumors was a report that one of the attacked freshmen had required a trip to the emergency room, and that the attack was sexual in nature. The latter, of course, kept the news hounds on the scent, and the school's story fell apart like a substandard library parking garage. By the next week the Carmel cops and Hamilton county prosecutor were launching investigations which somehow hadn't been triggered by the hospital's incident report of a month earlier.

The completion of the investigation and announcement of possible charges was delayed, and delayed again; another senior joined the suspended when an earlier incident came to light. At some point someone pointed out that the alleged attack on the alleged bus allegedly occurred in Hendricks county, which somehow turned the thing into some sort of ad-hoc cross-jurisdictional extra-legal CYA fest. And then yesterday, after an extra weekend's delay, prosecutors signed off on the recommendations of a grand jury. The four were charged with varying degrees of misdemeanor activity, though the rumored charges of criminal deviate conduct--which requires forced sexual behavior--were not among them.

Connoisseurs of political hegemony, small-town shenanigans, and the Constitutionally-enshrined privilege granted wealthy real-estate developers and corporation lawyers gathered in mid-sized groups probably have already guessed that the excessive redaction of the original investigation continued unabated into the release of actual charges. Out of concern for the victims, of course. Professor emeritus of Law Henry Karlson called it "one of the
most outrageous cover-ups I've ever seen." If you'd like a little whipped cream with that, the security tape from the bus, said for months to've been taped over the following week, turned up like magic Monday.

When it happens, when something as twisted and inexplicable as the Carmel hazing case happens, our base instinct is to cast blame. Who is responsible for the kind of venal behavior that landed four former Carmel basketball players with misdemeanor charges Monday? How could this happen on the parents' watch, on the coaches' watch, on the school administration's watch?

Let me simplify this:

The four young men -- Scott Laskowski, Oscar Falodun, Brandon Hoge and Robert Kitzinger -- would be the ones to blame, and nobody else.

Here's what is generally accepted as established: the bus assault occurred on the freshman team bus, which was not supposed to be carrying any upperclassmen. There were three (!) freshman coaches on that bus, said to be sitting in the front and talking shop. The seniors boarded that bus at a rest stop, and the alleged assaults allegedly occurred in the back.

Let's just note for starters that teachers in many ways have a stricter legal responsibility towards their charges than even the parents, and that this is precisely the way it should be. "It was dark back there" or "Who knew?" or "The perps are the real criminals" are not excuses. It should be second nature for any teacher to watch for bullying, especially of younger students, and especially where athletic teams are concerned. Three coaches; none supervised the reloading of the bus, none walked to the back and checked out his charges, none noticed that two seniors got on board. As a result one student, whose crime was playing basketball, wound up in the emergency room, and who knows what else was visited upon those boys. At least one of the victims is said to no longer be enrolled at Carmel. We'll accept for the moment the Grand Jury's decision that none of the coaches should be indicted, but spare us the idea that they're simple victims of circumstance. They had a serious responsibility and they failed to live up to it. All were released as of yesterday, apparently, as was the head coach, but that should have happened at the onset, by their accepting responsibility and resigning in shame, if not by administrative action. Instead, once this became public knowledge, the head coach released a statement about "facing adversity", not facing up to your obligations and taking blame for not doing so.

Understand, I am not coming close to comparing the horror of Columbine, which happened just miles from my old house, with what happened at Carmel. I am only saying that when bad things happen, we, as a community, look for a way to place blame. Maybe it comforts us to believe that there's a reason, that this wasn't some completely random act that cannot begin to be understood.

As we've pointed out before, the principal of Columbine High took the stage shortly after the massacre to announce he didn't really know Harris and Klebold and had never heard of the Trenchcoat Mafia, despite a rather obvious and fairly disturbing yearbook picture from the year before. Columbine is a school no bigger than one class at Carmel. In both instances information well-known to the student body didn't seem to reach the ears of the administration. Is it not your job as an administrator to know what's going on in your school? Or as a coach to know what's up with a dozen students in your charge? If anything, it's the enormity of Columbine which could not have been fully anticipated. Hazing in the Carmel athletic program? The district had already been sued over it.

And it ain't like this is some unforeseen problem; the state just passed a (toothless) anti-school-bullying law a couple years ago. This is a serious problem in the forefront of educational issues, and people who're caught flat-footed by it aren't innocent bystanders. They're complicit.

The Carmel school board is going to vote in a new hazing rule, after which everyone will congratulate each other on bravely facing the problem head-on. Then they'll announce they're busy looking forward. Through the same old prescription lenses.

* As has been the case since shortly after the story broke, the Racist Beacon has closed comments on any Carmel stories. Which, of course, merely serves to underline that the blatant racist garbage which half their stories attract are there at their sufferance.
** Joke. As with all circles, nothing in education is "whispered".

great! its a very nice site...the writer and the ideas of the reader at one...

Long time reader and lurker. Just have to say something about this one.

I've been following this saga since the news first broke. I still don't know exactly what to think about the course it's taken. I think the coaches should immediately have been fired; they obviously were derelict in their duties. I feel terribly for the victims; high school is a tough time to begin with. This is the type of bullying that can damage a kid for the rest of their life.

Should there have been such a brouhaha about the whole thing? I think it's just a "story" because it's Carmel. If it happened it IPS, we wouldn't have heard more than a blip.

I do know I'm tired of hearing about it. Did we really need to see video from the alleged perps in their jail cell and a shot of them in their Ralph Lauren polo shirts leaving the jail at 4:30 a.m.? Next, those tools will be getting fan letters from girls. They're celebs now! Ugh.

Personally, I'm much more entertained by Carl Brizzi and his hilarious hijinks.

I've lived only miles from Columbine for over 2 decades now, and the authorities here did just as good a job dissembling over who should have known what and when they should have known it. So, some things are universal.