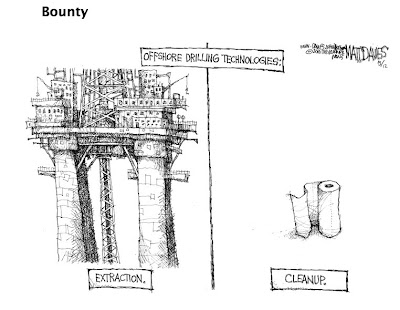 • I don't suppose there's any reason for you to've seen last night's 60 Minutes, aside from anyone who checks in for my uncanny Andy Rooney impression, but the interview with Deepwater Horizon survivor (cut into convenient bite-sized chucks for you here) Mike Williams was a reminder that teevee journalism could be riveting if anyone ever decided to try some. Interesting, though, how no amount of repetition of the same damned story can quell our Shock! Shock! that corporate drones behave like corporate drones, that the upper-level management of corporate behemoths is utterly, irredeemably amoral, and that both groups' first inclination is to lie their asses off preparatory to dragging the whole thing out through the courts for two-and-one-half lifetimes.

Is it a shock that BP had no intention of protecting the rest of us from the catastrophic failure of its profit-making schemes? That corporations in general view the world the way my cats view a sandbox? I, on the other hand, am not permitted to drive a mile to the store without carrying proof any accidental harm I cause will be paid for by me or by proxy.

Kill a couple dozen workers--that's before you unleash an environmental disaster--pay a fine equal to a half-day's profits. Eventually. Drive the getaway car for some guy you don't know plans to rob the bank he goes into, drops his weapon and has it discharge, killing a security guard, you get a date with a lethal injection. There is a major political party in this country dedicated to the idea that these people shouldn't pay taxes, be subject to any regulations they didn't write themselves, or ask permission before they start drilling on public lands. And the New York Times thinks tomorrow's primaries will be a referendum on just how widespread the psychosis is.

• Speaking of the Times and massive flumes of noxious substances, this Douthat column is noteworthy in that the man can write a column (take the rest of the week off, Ross!) based on a reasonable, if watery, analysis of the facts ("The response to repeated hammer-blows to the global economy has been to consolidate power in the same hands that caused the problem") and still be full of shit ("It's all Robert Rubin's fault, and federal healthcare is the same thing as bailing out Goldman Sachs"). This is partly the inevitable, I suppose, result of spending your entire life in absolute certainty that the Vatican position on reproduction and US law ought to be identical; it leaves no room to recognize the validity of anyone else's point of view, let alone space in which to compromise. On matters of lesser ethical importance--war, say, or theft--it allows you to simply appropriate someone else's viewpoint and claim it as your own. With, naturally, a little anti-Obama rhetoric thrown in just to keep straight which sideline you're prowling. But discovering the Peter Principle eighteen months after George W. Bush left office?

• Speaking of the Peter Principle, Indiana Emperor Mitch "The Spork" Daniels is now facing a countersuit by IBM over the failed ("failed" is actually the kindest way you can put it) billion-dollar privatization of the state's Family and Social Services Agency, which was overseen by Republican Slush-Collector Designate Mitch Roob. Daniels was forced to cancel the program last fall after paying full dollar for eighteen months for a program which never met its goals (and "never met its goals" is actually a compliment). The state is now suing IBM for $400 million it paid in order to keep the whole Ponzi scheme going until after the 2008 elections. IBM is countersuing for an additional $50 million it claims it's owed. And it plans on offering as evidence the rosy public pronouncements Daniels kept making rather than admit he's a lying sack of excrement. (h/t Doug Masson)

By the way, it's nice to sit back and reflect on the times those of us who opposed The Brain's underhanded dealing on Daylight Savings, or the sale of the Toll Road, or the FSSA and other "privatization" schemes, were branded as hopeless hicks stuck in horse-and-buggy days, too dim to see that Mitch was bravely accomplishing for Indiana what he'd already done for the Iraq War.
Labels: Things I Say Just To Keep Myself From Screaming
Email ThisBlogThis!Share to TwitterShare to FacebookShare to Pinterest

enjoyed this one... and you were way too kind to the oil barons...

I think there's more than one major party dedicated to that idea.

And since there are only two major parties, you probably know which other one I mean.

But president Hope and change cravenly serves his masters with disdain, Kathy. he really wants to bring CHANGE, so policy after awful policy is just fine, thank you!

Money rules all, including politics. Everything/one else just scuttles along like sand crabs trying to get by and not get squished.

If I squeeze my mind really hard, I can get some minuscule inkling of the mindset required to get to the top levels of executivedom in a Byzantium like BP or Halliburton. It's like H.L. Mencken's explanation of why politicians are the way they tend to be - it's almost inevitable, given the requirements for success, that the amoral and the shameless blame-shifting and the utterly selfish shank-wielders should "rise" to the "top". (Nobody uses scare quotes like you, Doghouse, but I'm trying to learn.)