MY Poor Wife helps me shop for a bike helmet as I bring the '77 Raleigh Super Course out of mothballs*.

ME: "Universal fit" my ass! Look at this thing. Gyro says it fits 98% of the population.

PW: The other 2% are you and the Elephant Man. 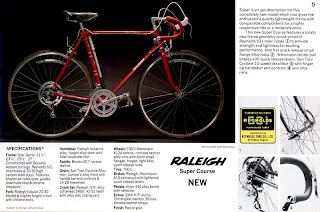 * It's a great bike, which cost me about $200 back in the day, which was a lot of money for me, but it had all Sun Tour components, a big step up from similarly-priced stuff. And it's cleaning up remarkably well for having spent the last twenty years in garages and basements. I never sold it because by the time I was too spoked to ride in traffic, and there no longer was any farmland in Marion county that wasn't a half-hour's drive away, the long contagion of the mountain bike had set in and nobody wanted a racing bike. I dunno if anyone does now, either--and I'm not selling--but, god bless the internet, it's now easy enough to find other people out there who pine away for this stuff, most of whom are too young to've known it except as an antique. I feel like Rip Van Winkle. If this works out--no test rides until a complete tune-up is finished--I'm breaking out the Yamaha CA-400 tube amp and the Yonex racket with the head smaller than grandma's stove.

my favorite curmudgeon is also a retro-grouch? awesome.

bicyclesafe.org and bicyclelaw.com are great resources for someone just getting back into it.

i have to warn you though, you seem to already have enough bile stored up. riding on the street with the cagers is likely to increase that blood pressure quite a bit, and more often than you would probably like. cars seem to make people stupid. well, stupidER.

I have a similar-vintage Schwinn. I know, I know, a Schwinn, right? But I ride a bike pretty hard, and Schwinn builds 'em heavy enough to take it.

Also, it's a 27" frame cuz I am an oversized monster, and is nearly theft proof since HARDLY ANYBODY CAN RIDE A FRAME THAT LARGE.

I pulled out the Trek for the first time in years this year, and realized that the Old Red Schwinn is probably better for the riding in the city I do, so that's next on the refurb list.

Oh, and I will take the Yamaha amp.

A nice, strong, forgiving steel frame, bar end shifters with what looks like good old non-indexed gearing. People pay extra for that stuff nowadays. And I bet it didn't need all that much attention to get into shape after its decades-long sleep.

Never sell that bike, unless you're at peace with the notion of some hipster kid turning it into a fixed-gear messenger rig (sans messages).

Word Verification: bresseal. Sounds like something a bike mechanic does to old frame welds.

That Raleigh is sweet. It makes me pine for my old Fuji Sports 12.

A friend of mine had one of these and he decided that the only rational way to deal with it was to paint it Huffy black and put a Huffy sticker along with a couple of Dukes of Hazzard cereal box prize stickers on it. This made it unattractive to the average bicycle thief and too wierd for the experienced one. Of course, he is the one who spent too many hours trying to figure out how to hook up a 1-40 voltage transformer from his car battery to his bike rack so that any potential bike thief would either be electrocuted or knocked across the parking lot.

Your wife is pretty funny.

It's gone full-circle now, Dog. Mtn. bikes are now recognized as clunky, road-resistant specialty machines, best on dirt and hills. What you have there is the planet's coolest ride evar.

But, yeah, there's a technique for riding in the streets and out on the roads. Don't take any shit, claim your space and be ever wary of hostiles in SUVs.

You made a very good buy back then for another reason: 700c wheels. That's standard worldwide, so tires will be easy for you to find, along with other replacement parts. All too many road bikes marketed in the US in the '70s and early '80s had 27" wheels--close to 700c, but not close enough. Finding tires for them is an undertaking, and replacing a fork? Eccchh.

That said, I'd be tempted to throw a triple chainring crank on that beauty (with a different front derailleur to accommodate, and maybe a different rear, depending on how well that old SunTour handles a triple) for greater ease in climbing hills. Then again, I live in San Francisco, where hills are ubiquitous.