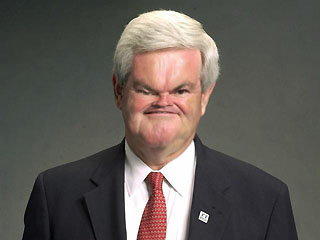 So it turns out that riff on the Roosevelt memorial wasn't Newt spouting off in an interview; it was Newt given an hour on FAUX to prove that Christians are a persecuted majority in this country because our monuments no longer quote the Bible and sweep the sky.

To be sure, that's probably as insightful a comment about Art as one is likely to get from a self-appointed spokesman for Christianity and professional history fabricator, but on the other hand The Wall is without question the most-visited and the most-inspiring (at least currently) monument in D.C. If anybody's taking rubbings off that godawful collection of bronze GI Joes at its base it's probably something actual decent Christians would rather not know about.

The former history professor--I'm still awaiting his response to my exposing his total ignorance of the history of abortion and contraception in this country in the pages of George magazine in 1996, by the way--wrote a blurb for the show on the FAUX site (find it yerself) which began with his usual dedication to accuracy:

It’s like clockwork — every Christmas there’s controversy about religious displays. This year they took down Christmas trees at the Seattle International Airport due to a complaint. A few days later they put them back up, but why was there a problem to begin with?

As a former professor of history, I can tell you this is not what the Founding Fathers envisioned.

Proving that even a sighted pig can find an acorn now and then. But I'm guessin' Newtie can't tell us why this is so--that even that percentage of the Founding Fathers who were Christian never envisioned anyone celebrating Christmas. Newt seems to imagine the 18th and 19th Centuries as sort of Leave It To Beaver with muskets.

I suppose it's no use to suggest that reading the Founders' intentions through a series of monuments dating no further back that the mid-18th century is a questionable exercise. Dr. Gingrich is the guy with the Ph.D., after all. And the FAUX contract.

ON EDIT: Somebody correct me if I missed Gingrich's protest when the sacred elevator to Heaven's good graces that is the steps of the Lincoln Memorial was used as a backdrop for a Rockettes kick line at the 2000 Bush Coronation Ball.

Dr. Gingrich is the guy with the Ph.D., after all.

Proving, once again, that not education in and of itself, but an open mind and information, is the cure for ignorance.

Anyway, damn right. But is it a residuum of seasonal Good Will Toward Men (and Others), or is it a deep sarcasm that brings you to cast the commentary in terms of Newt's actually being ignorant of the 18th century and meaning what he says?

To the tune of slightly overdue firecrackers welcoming a peaceful new year,
May the year bring you plenty of good will, but not such as would soften the determination to bash the hypocrites.

unlike fine wine or cheese, newt is not aging well.

recall that in July, newt was salivating very heavily and loudly proclaiming on television that the attack on southern Lebanon by Israel was the beginning of World War IV or V or III or something ...