The Gift That'll Keep On Giving For Another Generation Or Two, Minimum 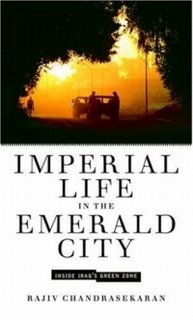 Buy it through World O'Crap and do a good deed while you're at it.

I'm still fifty pages from the end (I remember the days when this city used to go ballistic over a Colts appearance on Monday Night Football; now it's just an interruption) but so much of this book makes you want to shout out loud I have to start. Paul "Jerry" Bremmer. Doug Feith. Dan Senor. Bernie Karik. Custer Battles, LLC. The 24-year-old real estate salesman who decides to remake the Iraqi bourse.

• The closest thing there was to a study of postwar Iraq, the Future of Iraq Project, had been organized by Thomas Warrick, an international lawyer who had gone to work on war crimes at the State Department. Jay Garner convinced him to come to work for him. Rumsfeld ordered Garner to remove him--on Cheney's orders, because Warrick saw through Ahmad Chalabi.

• The Iraqi people got their news from al-Jazeera, in part because the contract to remake Iraqi television was given to Science Applications International Corporation, a defense contractor with no broadcast experience. They hired a veteran television producer named Don North to head the operation. He was told he didn't need to do any Stateside planning; SAIC had people in Iraq taking care of it. When he arrived he found thirteen camera tripods with no base plates for the camera, a receiver for satellite transmissions with no power cord, and no instruction booklets for anything. "It was like they bought everything from a flea market in London," he said. Bremmer soon had Iraq TV filling air time with American propaganda.

• After the rocket attack on the al-Rasheed hotel, inside the Green Zone, in October 2003--an attack facilitated by the opening of the opening of the nearby Fourteenth of October Bridge just fifteen hours earlier--Maj. Gen. Martin Dempsey, who had told the crowd at the bridge opening ceremony "the safety and security [of Baghdad] has been achieved", informed Paul Wolfowitz that the attack showed the weakness of the insurgent forces, because the rocket launcher was crudely welded.

• In his February 2004 Iraq photo-op, Tommy Thompson used the Ibn Sina Hospital as an example of how the US was "reestablish[ing] Iraq as a center of excellence for medical protection and medical care." The hospital served only the coalition military forces, Provisional Authority personnel, and American contractors. The real Iraqi hospitals were hellholes. The American in charge of the Iraqi health-care system was a Michigan social worker who had been the director of a Christian-proselytizing relief organization who operated one of those anti-abortion adoption agencies back home.

Oh, lordy. I finished that book about 2 weeks ago, and my head is still reeling from it. Infuriating. Sickening.

As a palate cleanser--thanks for the photo of one of my heroes, poor tragic Phil (below).

I wait in anger and amusement
In my rehersals for retirement.

My blood pressure wouldn't handle the
strain. The biggest cluster fuck in American history by the most incompetant
administration ever.