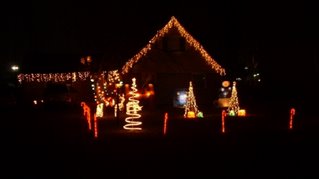 In my neighborhood this sort of thing is called "understated elegance". Sorry the photo crew got there after the enormous inflatable Santa and Polar Bear were already deflated for the night.

Good news this Yuletide for the sincerely religious--our travelling survey racked up another Nativity scene in each category (church property, private property) this year, for a total of three each. The new private creche was discovered because of my half-dozen trips to the hospital in the past week (Mom now released, with some new meds and an "atypical dementia" tag since some of her short-term memory works remarkably well--much better than mine, for example) and had the bonus distinction of being teamed with a couple of those blow-up lawn globe things. Christmas lawn Dada.

The addition to the religious category, alas, was a photo spotted in the Indianapolis Star (the rules being unclear on this point I decided to count it), which seemed to feel that in a notably warm and snowless December Christians themselves could use a little fluffing:

The manger scenes with their baby dolls nestled on the hay are all aglow across the city....

At least a good half-dozen, anyway

The thing I enjoy about this story is the same thing I enjoy every year when they run their "putting the Christ back in Christmas" story, now in its forty-fifth year and showing no signs of being even slightly disconcerted by what outsiders call "reality": how some poor schnook of a reporter, already forced to work Christmas week, gets assigned to collect three quotes (four, if they include a rabbi somewhere for ecumenicalism, which, as you know, is not in fashion this year) and manages to obviate all doctrinal distinctions among the hundreds of Christian sects in our little burg alone. This, despite the fact that many, if not most, denominations recognize that the whole Christmas story thing is mere fable--one some even actively oppose--even before we get to that virgin stuff. This year included a fine bit of preacherese:

Living in a culture in which people go out of their way to avoid pain and suffering is one reason the Christmas story is easier to latch onto than the bloody Crucifixion, said the Rev. Larry P. Crawford, pastor at St. Gabriel the Archangel Catholic Church on the Westside.

As opposed to what culture, exactly? North Korea? Sparta? the Klingons?

There's more cheering news this Advent [note: "Advent" is my new preferred tactic in the War on Xmas, inspired by the Allied POWs at Colditz who infested the place with wood rot knowing it would take fifty years to have any effect. "Have a solemn and mortifying Advent season!" is now my standard greeting for complete strangers. I want to see the professional Christians wriggle out of that one]. The local news hairdos finally got away from all that secular "Black Friday" business and right down to the real Reason for the Season: encouraging people to shop their fucking brains out. It's gone beyond the helicopter-assisted reports on mall parking, which, now that I think of it, I've yet to see this year--they've probably been shelved as "too negative"--and onto actual exhortations to Just Buy Stuff. The change is actually subtle, because a good 30% of the regular news the other eleven months is now taken up with reports of Grand Openings and Site Selections and Zoning Disputes (followed by the inevitable Zoning Variance Announcement, sometimes later in the same newscast) and all other matters of news-esque Shopping Foreplay. The big difference I saw was that the entire final week before Xmas is now given over to scolding viewers for "procrastination". I saw two separate reports on different channels sternly lecturing "Last Minute Shoppers" last Friday, December the Fucking Twenty-Second, with an entire weekend left before the birth of the Lord. This is what happens when all your "news" comes from people who have personal shoppers on their own payrolls.

Ya know, my visits here are some of the times I least miss having cable.

Merry christmas, and thanks for the periodic moments of sanity sprinkled through my year.

And Happy Holidaze to all you fine people who chance to read this.

May the weekend be relaxing. When this is threatened by family pressures, run away or feign illness and take to your bed.

Way ahead of you, isabelita. Migraines, aside from being incredibly miserable, are an excellent excuse to avoid most anything. It's a reason to threaten barfing on people even when flu season's over!

I'm stealing the Advent tactic, Doghouse. It seems about perfect. Also, I'm pretty sure they're not doing the helicopter thing anymore for fear of telling Al Qaeda where our malls are.

And, if we could only live in a culture where people go out of their way to avoid inflicting pain and suffering on other people. See if you can do something about that, Rev?

Happy holidays to the rest of you. I hope you all get to spend it with people you love, or at least like. Hug 'em if you got 'em, folks.

Doghouse, this year's Neiman Marcus Christmas window display featured, as its centerpiece, an enormous Christmas tree made out of shredded money from the US Mint. If you can think of a better way to say, "Christmas is about shopping" then I'd like to hear it.

Well, maybe a creche made out of the same material holding a solid gold baby Jesus with a price tag attached to his toe like it was the toe tag for the death of any real meaning for the holiday beyond shopping. That might be a bit more of a statement about consumerism.

Pope Eggs Benedict made some sort of Christmas statement about consumerism, but you can't take the guy seriously when you consider his running cover for child molesters and his anti-gay positions (even though he is widely rumored to be gay). Besides, how many department stores does the Pope own?