Once Again Missing The Distinction Between "Bullshit" And Aromatherapy 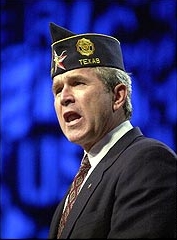 "The army is stressed."

Hello? Mrs. Whittington? I sorry to report there's been an accident, ma'm. The Vice-President accidentally stressed your husband's face with birdshot.

Like teenaged Laura Bush stressed her beau at a four-way stop. Like the number of times the "youthful" George W. woke up in a pool of his own stress.

Stressed, motherfucker? You walked outta the shop with a crystal vase and you come back with two handfuls of sand, and stressed is all you have to say?

What stopped you from creating a genuine coalition to remove Saddam Hussein? The mess it would have made of your reelection schedule? The precision of defining an actual mission? The potential for competence on the ground, and the lost potential for ill-gotten gain?

What stopped you? What stopped you from making sure the plan in place was sound, or at least finding someone who'd could tell you if it was rather than telling you what you wanted to hear? What stopped you from doing something about the looting? What kept you from immediately, and forcefully, and honestly addressing Abu Ghraib and the attendant breakdown of discipline and ethical behavior and following that trail right into the Pentagon?

What's caused you to stand by while men of both parties who had served honorably, even heroically, in the war of your youth were slimed for your personal political gain? A war they fought and bled and suffered in, a war you relied on string pulling and wheel greasing to keep you clear of (and even then screwed around)?

Now the army is stressed? Time effing Magazine asked the question in 2003. Funny how it didn't trickle up to the White House until after the last midterms.

Thank God it doesn't matter what you say anymore, though I bite my tongue as I type that. It was hard enough to believe that people would vote for you in the 2000 Republican primaries, let alone the general election. It was hard enough to believe an election could be stolen so blatantly, or that a major political party would, far from being apologetic, actually revel in the fact. It was understandable that after 9/11 many people would try to convince themselves that you were competent. Even so those things were bound to come with a price; how much more so the senseless, worthless slaughter in Iraq? By 2004 there was no excuse whatever for anyone to imagine you were something other than the slow-witted, cocksure frat boy you've been all along, the one who has mistaken the toadying deference he's been shown his entire adult life for people, somehow, missing his obvious low self-esteem and even lower IQ. The President of the United States who had to outdo his Daddy.

Mend the army? Fix the army? Soothe its troubled brow? Maybe a nice mudbath, some scented candles, stake it to a half-hour at that Asian massage parlor on Route 12?

Yep, just a little TLC and pretty soon it'll be back to being that army we'd all like to have a beer with. An' guess who's buyin'?

That hurt to read. Jesus. I'd kinda like to hope it'd hurt Bush to have it read to him, but he's got nothing to hurt, never has.

I'll say it again - if this were a movie or a book, critics would say it's unbelievable. There's no way this guy would get elected twice - and beat a war hero the second time around? Never. The Oedipal themes are too ham-handed. He's simply too tone deaf, the administration too evil. There's not enough gray. People would never stand for it.

And here we are.