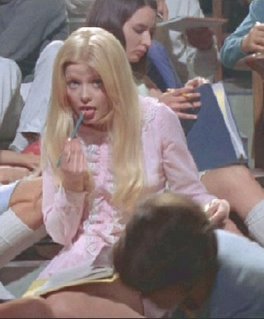 because it's my blog, that's why

Hey - I know this one! That funky movie with Ringo Starr and Marlon Brando, right? "Candy"! Ah, those crazy 60's. By the way Doghouse, no mention of Screamin' Jay Hawkins' birthday?

I saw Candy at the Balboa Cinema on a double bill with The Magic Christian many years ago. My girlfriend thought it was trash, and I couldn't exactly disagree, but...Well. Ewa Aulin.

I later found a reprint of the novel (originally published in Paris, I think) by Terry Southern and Mason Hoffenberg (if memory serves). It was written in the late 50's, so it lacked the psychdelia that seemed to consume the last third of the film like a snake swallowing its tale, and instead offered a pretty funny and astute satire of post-War, pre-Sexual Revolution erotica

But it helps if you picture Ewa Aulin while you read.

Screamin' Jay's on my list. Thought I did him last year.

And Candy, well, it's rare that I say this but those people were just way too high. It does have a couple good moments, though, and Ewa just cracks me up. She belongs in the role, though it's too bad her brand of non-acting and the required brand of non-acting were two different things.