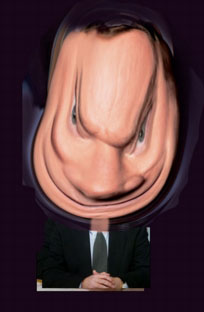 MR. RUSSERT: "We try to stay away from rumors...rumors don't make it on air."

Really, Mr. Russert? Not even bald-faced lies about White House vandalism? Maybe Andrea "Queen of Vandalgate" Mitchell can refresh your memory after she gets out of the box. By the way, wasn't she the one who announced back in '03 that Plame's CIA status was "an open secret around Washington" ?

Here's my deal: provided NBC accounts for the two of you being shitcanned with a one-paragraph statement and not a Rumsfeldian light opera parade, I will consider that, plus the mere knowledge that immediately after learning he could face the death penalty for lying Ari Fleischer had to wash his own undies, as adequate public compensation for your Vandalgate roles. For the rest of it, Timmy, you can answer to Big Russ.
Email ThisBlogThis!Share to TwitterShare to FacebookShare to Pinterest

That part about Ari freaking out when he read the paper is my favorite part. So far.

The history of perfume oils dates back to ancient Egypt when these fine scented oils were presented to royalty as gifts. In modern times, however, when the word "perfume" is said, most people think of department store fragrances, which consist mainly of the concentrated oil and alcohol solution. Nevertheless, as more and more people are finding out about them, perfume oils are experiencing great popularity. Here are some interesting facts about perfume oils: