Mission Acc… What Was That Mission, Again? 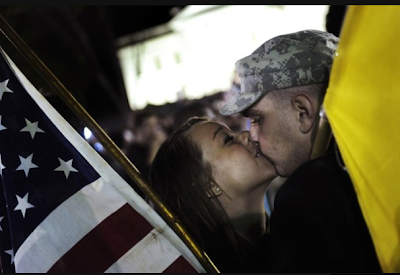 OKAY, sure: it's easy to look on the Yahooligan crowds (which seemed almost uniformly to've been under 12 when the Twin Towers fell, and barely over 12 today) celebrating the demise of Osama bin-Laden and wonder about a country in which even matters we agree are of the utmost national seriousness turn into Cinco de Mayo and St. Patrick's Day without recourse or reflection.

Of course it's also possible to just issue a blanket pass, to grade on a (generous) curve, to acquit by reason of insanity or insipidity, to wait--yet again--for the gradual post-facto Slightly More Realistic Attitude to sink in, get processed, and, finally and most importantly, age long enough for people to admit they were foolish without actually admitting it. See Bush, George W., popularity of.

It would be, that is, if the same sort of juvenile know-nothingism wasn't coming out of my teevee this morning.

Yes, indeed, I could do without the wanton jingoism and the easy martial displays, made even easier by the fact that none of the flag-wavers, -wearers, or -wrapees is risking so much as a cuticle in any real defense of her; I will, perhaps by accident of birth, forever link Incontinent Bunting Syndrome with the Flag Decals of my youth and John Prine's minstrelsy, the cheapening of patriotism for a partisan political advantage which did nothing whatsoever to prevent us from losing a war (and coincidentally 58,000 American lives) those principles would have kept us out of in the first place if they were honest, and honestly applied. And, yeah, I doubt I have much more use than the late Mr. bin-Laden did for some aspects of American/ Western foreign policy and global economic hegemony, but that attitude doesn't require me to support murderous religious thugs who happen to agree. It requires me to fight the murderous religious thugs in this country who take my money to continue the enterprise.

But, mostly--and I'm convinced this is an objective viewpoint--I think we all could do without a culture where the aftermath of a military victory wasn't indistinguishable from the aftermath of a gridiron victory, and where the actual slog of military conquest--including the price to pay in raising up our former enemies--was distinguished from "getting" bin-Laden, Uday and Qusay, or Gaddafi's grandchildren. The disappearance of solemnity, of seriousness, of self-reflection, these are all matters which ought to be addressed, but we've left that process in the hands of crooked politicians, corrupt religiosos, and a mass-market media more interested in pitching soap, soda pop, and sexy underarms.
Labels: Happy Days Are Here Again
Email ThisBlogThis!Share to TwitterShare to FacebookShare to Pinterest

As a fan of yours, the following interjection:

"--and I'm convinced this is an objective viewpoint--"

leaves me of two minds.

The first, "Well, obviously; that hardly needs to be said!" was closely followed by the second, "I should start saying that before every sentence as a [poststructuralist] disclaimer!"

Well, you know what they say.

All that's missing is the guy (or gal) running around pointing fingers at the sky...Touchdown Jesus does it again! While I am not celebrating this morning, can't exactly say that I was saddened by last night's announcement. It had to be done.

Still, we know the procedures for celebrating football games we didn't help win, and so far this has been more graceful than that thing with the flags after 9/11. And it should die down quickly. Those slipstream-tattered flags on cars and trucks, you still see a few of them around.

The flag-showing in the immediate aftermath (hours) of 9/11 was a spontaneous demonstration of UNITY of all Americans. Later it was perverted (by conservatives) into the jingoistic fake-military "you're with us or against us!" crap.

Best summed up in a comment from an Australian cartoonist....

the morons and plebes who represented the absolute lowest ebb of Roman citizenry felt the same way after a victory....meaning, to me, at least, that we are continuing a gradual slide into the Late Roman Republic. Our institutions cannot handle either our Empire (the one some of us didn't want) or the political challenges we face.