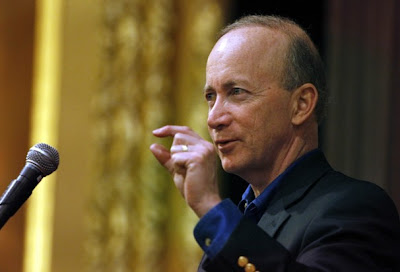 FIRST off, leave us pick through the wreckage: Mitch Daniels now has a wealthy PAC that has essentially been campaigning for Mitch Daniels non-stop--and which, I'm guessing from having sat through it, single-handedly trebled spending on last year's Indiana General Assembly races--courtesy the Eastcoaster "Conservatives". And the Eastcoaster "Conservatives" had their needed counterweight to Abject Palinism--which had taken over what was left of the party after '08--which ran, not unsurprisingly, from the spring '09 rollout of the Mitch Daniels Artificial Buzz until the moment they didn't need it anymore, plus a couple months so the whole operation appeared dignified.

So the only losers here are the punditasters who were dutifully shilling that "the GOP Race Needs Daniels' Seriousness" crap. And they've already been paid, not to mention the fact that these days abject, overt, and venal hawking of whatever swindle is going on at the moment is less a career-breaker and more a job description. Okay, and literally dozens of college students who really imagined that Mitch Daniels should be President. But maybe they can use the free time to get out more.

[Here I rather stoically omit us Hoosiers, who now face eighteen months of Mitch Daniels, governor who isn't running for something, following six years of Mitch Daniels, guy trying to tailor his record in Indiana for maximum career growth. And that's before we wind up with Governor Mike Pence in a further escape into Jebus fuck all it doesn't matter because THE END TIMES ARE UPON US ALL! Praise Jesus! And so we'll use what time's left to get as many right with the Lord as possible. Because it's worked so well for Kansas.

[And while I'm thinking of it--this is the sorta thing that happens every time my Poor Wife is prescribed painkillers--I started out here with a paragraph that was supposed to be cosseted by brackets, and then the damned thing growed like Topsy. ** So now I have multiple paragraphs, all comically parenthetical (by which I do not mean any of this is funny; "comic-paranthetical" is the style) and I think the proper punctuation is "opening brackets (or quotation marks, etc.) at the beginning of each paragraph, closing brackets only at the close, or grand finale, as it were". Perhaps better, knock it th' fuck off. The former does make it look like you just forgot, though.

[And, listen: maybe this should just be between us Hoosiers for a moment, but: Th' fuck? Millions of you believe that Barack Obama is not a citizen of the United States. Birther, Bircher, Floater with the Current: if you really imagine there are so many highly successful shenanigans pulled off right under your discriminating noses, how is it that you've missed this guy's routine? Daniels has been as transparently false from the git-go as any carbon-based politician reasonably imaginable. He waves around that phony $200 M deficit he inherited; at this writing you and I are $2 B in debt. On his watch. Sure, sure, the economy's been tough, but he was on watch when the damn thing wrecked in the first place. He ran off to help Delco-Remy celebrate dumping union jobs, and then--if you're not a Hoosier and still reading this, I'm not kidding--touted imaginary telemarking jobs as a replacement. Eight more years of this sort of accomplishment is gonna be more than we can stand, and if Jesus wants y'all, th' fuck's he waiting for?]

So Daniels got to achieve, or, rather, be recognized for achieving without actually doing so, his political dream, some sort of self-defined transfiguration into a bald eagle-eye Fiscal Adult from, of course, the guy who threw away the Clinton-era surplus, and $400 billion besides, while the official provider of Congressional talking points buffing the Bush tax cuts. Really, even if you just want to give up and accept all the blather about Daniels' Indiana record, consider that even under the rosiest of rosy scenarios you're still left with the uncontroverted fact that Daniels abandoned ship on a $600 B loss so he could rush back to Indiana and spend six years crowing about reversing a $200 M shortfall. And that's if you accept the routine about the shortfall. Which you shouldn't.

Mitch Daniels put together the plausible deniability package that allowed the Bush administration to slash the top tax rates at the very time when we needed government spending to stave off recession. He then quit to come to Indiana, won a governor's race mostly because the undecided voter decided we'd had enough Democratic administrations in a row, and immediately set about to burnish what was left of his image by eliminating Indiana's deficit, and its deficit spending, both of which he had to invent to make the point. Neither of these was an "accomplishment": the former is just what the Republican establishment, and its bankrollers, always intend, and the second was a self-aggrandizing PR campaign. Neither came about as the result of analysis; they're matters of blind Randian faith whose dismal failures we were already soaking in. Daniels did precisely as he wanted to do, given the supervision of a "conservative" state and a pliant legislature. Procrustean† budget cutting does not "solve" our deficit problem. It reacts to it, and it reacts in defense of incontinent tax-cutting, not reasoned analysis of what we as a people should, and should not, be spending money on. People who favor this sort of approach may cheer on Mitch as a kindred spirit, but deep intellectual problem solver he is not. He's a water carrier for Big Wealth. The Press has no excuse for confusing the two.

And, y'know, this one ends the way it should: on a note of supreme, and maybe supremely cynical, falseness. I said a long time ago that Crazy Cheri Daniels would keep Mitch from really running, but that shouldn't be taken as the single example of prescience in a long and tumbledown career. In the meantime all the attention, and all that glisters, stroked Mitch Daniels' ego, so how this was going to play out (aside from an early exit from the primaries) became anyone's guess. Blaming Cheri is horseshit; she's never wanted to be a political wife. Daniels merely ran out the string. His high-priced advisors couldn't turn him into someone who was going to poll more than 2%, and they couldn't turn someone who wasn't going to poll more than 2% into Exactly What The Republican Race Needed. Not to say they didn't come close. In the final analysis Mitch Daniels is the Fred Dumbo Thompson of 2012, the product of artificial excitement and a supposed Pure Ideological core of the Republican party which exists only in Hyperreality, and inside the Beltway, if we may distinguish between them, and even then only as an inside joke.

* meaning "in my Mort Sahl voice", not "quoting my inner Mort". Mort Sahl was a godsend in my youth, or that part of it spent in front of the teevee. You could do the line as any comic you wanted, probably.

** the other day my friend Doug Mason, brave Indiana blogger and, if I may say so, possessor of a hot wife and a family which is both a) remarkably cute and b) not pressed on his readers like unwanted fifth cocktails, linked "procrustean", presumably to an explanation. And I said to myself, I wouldn't. Who's right? I don't imagine this as an argument about the intelligence, or presumed intelligence, of the readership: Doug was just nice enough to link an explanation for something he thought some readers might get. But the reason I wouldn't in the first place is precisely that I'd figure it's something the average reader should know, or, having never encountered it, be curious enough to take some fucking initiative for once. And maybe that's a form of reverse-double-Slatesque snobbery on my part. Interesting how this long, pointless diversion comes about in the middle of a long, pointless diversion about punctuation, isn't it? Wow, this stuff is really trippy.

Who among us is not procrustean?
~

And well said Mr Riley; the mildly dissociative powers of whatever style of Doghouse's Little Helpers are surely a blessin' to us all, even if your usually ironclad punctuative sense suffers fractionally.

(Verification word: 'mackb', which I can only assume is supposed to end in 'knife' -- Oh Dog-house has...such pretty teeth, dear...)

Somewhere, George F. Will is sitting on the edge of his bed rocking back and forth with his fingers in his ears, going: "LaLaLaLaLa I can't HEAR you!!!"

I have to admit that I was kinda looking forward to reading lots of Doghouse's thumping of Candidate Mitch.

Oh well. I think he'll find something else to talk about.

I literally said, "Thank God!" when I heard the news Sunday morning.

Cheri is only the half of Mitch Daniels' "family values" issues. I foresee a quiet divorce once his term as governor is over.

I foresee a quiet divorce once his term as governor is over.

ANOTHER one? Those crazy kids just can't make up their minds about each other.

(And talk about your flip-floppin' politicians.)

I still wanna know the real story about the 16 stitches in the forehead. Hit by a door, bullshit.
My first thought was he fell off the treadmill. After Sunday's announcement, I'm wondering if Cheri arranged an "accident" at the gym. Somebody just manages to swing their barbell around at just the right time while muttering "Stay out of the race, or next time it's the groin".

But announcing his "no" right after a head injury gives him an out: he can come back in a few months and say he wasn't thinking clearly at the time.....

Picture caption: "How cold is it? That cold.