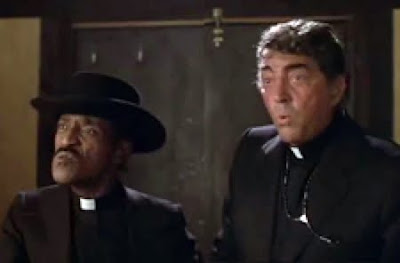 FULL Disclosure: The world-wide sex abuse scandal in the Roman Catholic church did not affect my attitude towards Christianity, organized religion in general, nor the role of officialdom in any way, shape, or fashion.

So, too, with a report funded by the Conference of Bishops, headed by a Professor and dean of research and strategic partnerships who, judging by appearances and her c.v. might be able to offer expert testimony on what teething rings tasted like in the Permissive 70s.

Sorry. The thing's DOA. It's so fucking D.O.A. that I can't fathom how tone-deaf you have to be to've thought otherwise. Dr. Terry does not appear to have spent her entire life in a convent, a deserted island, or trapped in a collapsed mine. And the saddest thing is that right now millions of young Jimbo Jonses are reading the report and saying, "I don't believe in nothin' no more! I'm gonna become a dean of research and strategic partnerships!"

Not to mention that the thing's a goddam mess into the bargain: Psychological and Sociological speculation without the customary rigor those two disciplines are so well-known for insisting on. No interest in establishing any sort of baseline in the 30s and 40s, decades known, respectively, for cheap cotton dresses which blew up in the slightest breeze, and muscled, independent women dressed as iron mongers. People did have sex in the 30s and 40s, and many more considered it. That much is well established.

As for the Permissive Sixties? Well, then, too. I was a child whose tender coming-of-age story concludes in the warm football autumn just before that benighted decade ended, with a young hippie chick, one school year my junior, in an Indian print dress hiked to the waist, innocent of underwear and unshorn of armpit, poised just above my throbbing, soon-to-turn boyhood-into-manhood, before we fade to black. For several years before that I was a sack of amok hormones, watching helplessly as my elders enjoyed the Swinging Medallion If It Feels Good, Do It lifestyle with girls who all looked like Jean Shrimpton, and never once did this convince me to consider the readily-displayed backsides of my fellow locker-room mates as an acceptable substitute. (The thing offers as evidence of something, honest to that God they ought to be the last ones to tempt, the case of "Reverend" Marcial Maciel, an abuser of young seminarians who couldn't possibly have been a real pervert because he fathered three children.)

I don't suppose I received any more guidance than your young seminarian of the period, but, then, I was on the road to Hell, not the road to a career in celibacy. What kind of fucking excuse is that? Hasn't the Church been teaching for at least two thousand years that sex was at best a really unfortunate obligation best left to the working classes? Young seminarians "weren't prepared" to actually go out in the world and live up to their vows? Or just to live up to those that weren't tested in any way? Could you figure out some way to make this worse, please? I've got money riding on it.

Y'know, guys, let's admit it. You wanted to make sure that John XXIII would never happen again, and the only way you could do that was your own version of the ever-popular Sixties charade, "Let's Get Back to Basics". Which meant, in your case, Sex-hating. This worked, for a while; we've seen the same thing in American politics: there's no stopping you once you convince nominally sane people to go completely crazy with you. But, c'mon, how cloistered do you need to be to think that's gonna play forever? You bought a little time with some hero-worshipping, JohnPaulII and Mother Teresa stuff, but you had to know the whole Madonna/ Barefoot and pregnant dichotomy wasn't gonna work for long. Didn't you? The priest sex-abuse scandal didn't outrage you. It embarrassed you. Because, at the top, people don't really believe the crap they feed the yokels. The Catholic Church has reacted to the sex-abuse cases the way Taco Bell reacted to the startling revelation that their beef doesn't contain beef. Which, in case you missed it, did not engender a public declaration that they'd use only the finest, rigorously inspected, top-grade food items from here on out. That's what you need a commission to explain.

Come, you should pardon the expression, clean. You should pardon that expression, too. If your ancient verities can't overcome a little Hugh Hefner, then get with the times, dudes. Blame it all on radical Islam.
Labels: Our Abiding Respect for All Forms of Bronze Age Superstition
Email ThisBlogThis!Share to TwitterShare to FacebookShare to Pinterest

Show me on this doll where the Sixties touched you.

If I trace my background to the 1700s, I find twin brothers in Beaver County, Pennsylvania, who were Scotch Presbyterian ministers. They couldn't decide whether to marry or not, and concluded that they should have children with Mohawk squaws so that they would be able to do family counseling better with their flocks, yet avoid the committment of marriage.

Their half-breed children found themselves as outsiders with both the white and the Iriquois communities, so they married each other. Thus, when someone calls me an incestuous bastard, well, I come by it honestly.

Thus, I feel ill at ease finding fault with the perverted Roman Catholic teachings about sex and marriage, pot, kettle, black, but sheesh, am I at least allowed to point out that the sexual abuse of children did not start in the 1960s, nor did it even become markedly more popular in the 1960s?

(Jeebus, scripto! Give a guy a little warning before you write something like that. Now I've got Spicy Hot V-8 all up my nose and on my shirt-front.)

Hippie-punching is a sport that never goes out of style, the first and last refuge of all reactionary hacks. This will continue long after the last hippie has shuffled his or her be-sandled feet off this mortal coil.

How can you mention The Swinging Medallions and permissiveness in the same breath?

Sorry. The thing's DOA. It's so fucking D.O.A. that I can't fathom how tone-deaf you have to be to've thought otherwise.

Perhaps the Catholic church has noticed the recent success of America's Reich, "we create our own reality, which you can study", and said, OMG, we OWN that concept?
~

Thanks for finding this woman's cv. In my opinion, the fact that it is 16 pages long yet she hasn't thought to paginate it tells us all we need to know about the general quality of her work.