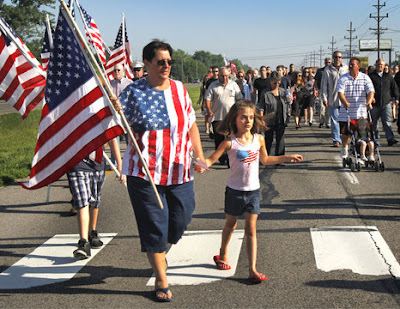 Indianapolis Star photo Charlie Nye
LEAVE us not mistake each other here. This is part of yesterday's Whiteland (Motto: Yes. Yes It Is.), Indiana, procession for James Allen "Jimmy" Waters, killed in Afghanistan on July 1st, aged 21 years. It is well to show your respect for his service and his sacrifice, your respect for the loved ones who have lost his companionship when his life should just be beginning. It's okay with me if you want to assuage your guilt at sending young Americans off to kill, and die, for nothing other than a ten-year fit of pique. None of that makes the flag of the United States of America a piece of apparel. It doesn't belong on your sweaty torso. It doesn't belong on your little girl's tank top. It's doesn't belong on the Colts' helmets, or on the lapel of your favorite politician. It doesn't belong to you. If you can't be bothered to treat it respectfully, then at least quit using it as a facile substitute for genuine sentiment and real thought.
Labels: You Kids Get Off My Lawn
Email ThisBlogThis!Share to TwitterShare to FacebookShare to Pinterest

abbie hoffman died for your sins.

I've been running a series, 'Flag Desecration', on my blog for years. Follow this link to see the latest revolting example:
http://bildungblog.blogspot.com/2011/07/flag-desecration-46.html

And they wonder at my level of disgust with overweight, loudmouth rednecks wearing similar clothing at the bowling alley.

Ever notice all the flags people started sticking to their cars, especially right after 9/11? Happens again every year on the 4th of July?

Trouble is, the average flag (and especially the average small souvenir-type flag, cheaply made in some third-world country) isn't made to stand up to speeds of sixty miles an hour, or even thirty miles an hour. So it doesn't take long before you end up with a frayed red-gray-and-blue rag on a stick.

And yes, that qualifies as desecration too.

House down the street with a 100ft flagpole flying a filthy and tattered US Flag day & night. At least it isn't up-side-down.

Another huge problem we don't discuss much, the fetishization of our military. It's completely out of control and won't serve us, as a nation, like we think it will.

I believe that it was about eighteen years ago that I saw a sweatshirt in JC Penney that had an artist impression of the US flag printed on the front. The design reminded me of a postcard I'd purchased at City Lights Books when I was visiting san Francisco: a reproduction of Lawrence Ferlinghetti's "Unfinished Map of the United States." The sweatshirt design lacked Ferlinghetti's critique of imperialism and was more vaguely patriotic, but not quite tending towards the jingoistic "let's kill 'em all" POV of Toby Keith and friends. I thought the shirt might look good on a lib'ral, and so I bought it. The first time that I wore it on campus, I came around the corner in the union building and stood face-to-face with an anthropology professor with whom I was doing independent reading in critical theory with an emphasis upon the anthropology of religion (I was contemplating some serious work concerning civil religion). He immediately saluted, and I'll never forget the look of surprise on his face. Needless to say, at our next meeting, I anticipated his intent to interrogate me with questions concerning national flags as designer wear, and I read a bit of Roland Barthes, The Fashion System in preparation. We ended up talking about Derrida or Foucault instead.

Doghouse, you old patriot, you.

Quick question, heydave, and you know I love you but I gotta ask. Does your disgust extend to fat lefties in Adbusters' corporate flag t-shirts, too, or are we off the hook?

Overweight, children, is not a synonym for "stupid", or even "ignorant". It doesn't even correlate all that well to "bad taste" or "jingoism". Sometimes it just means "They don't make drugs strong enough to let me get up every morning and face what the sociopaths are doing to the planet, and believe me I've tried them all".

Duly noted, D. -- especially so as someone formerly married to a woman whose anti-psychotics (prescribed and necessary) resulted in rather significant and unpleasant weight gain.

OTOH, just how many of heydave's "overweight, loudmouth rednecks wearing similar clothing at the bowling alley" do you suppose fit into your category? My estimate would be somewhere between none and zero.

Sometimes a cigar is just a cigar.

Back in the day, people were arrested for wearing the flag like that, let alone using it as a lawn chair seat.