The Seven Types of People You Meet On The Monon.*

OKAY, first: I'm not really doing this; there aren't many Barbies, but plenty of Clawers Just On the Farside of the Barbie Slope; and the Serious Women Runner shows my age. It's not that there weren't serious women runners in my day--which is, or was, a day when girls' high school athletic competition in Indiana was organized by something called the GAA, Girls' Athletic Association, I suppose, as though it required an extra level of protection for those Special Days. My sister was a superb athlete, an overachieving little sparkplug type, and her high school letter is branded "GAA", as though it didn't really count--it's that today they're more dedicated, more disciplined, and have better form than 95% of the males I see.

Title IX happened between the time I graduated from high school and the time I entered college. And along with the Civil Rights Act of 1964, which it appended, it's a perfect example of government "social engineering" which extended the rights of citizenship long unfairly and unwisely denied, something which would not have happened had the Durn Fool Gubment not acted. But me no buts about it. And, conversely, it's a prime example of the sort of institutional and individual foot-dragging--not to mention cries of "Tyranny!"-- the advancement of individual rights has met since Reconstruction.

Anyway, sorry posting has been light, and it ain't like politics doesn't impinge on my every spin of the crank. I'll be back tomorrow.

Oh, and a kitten. 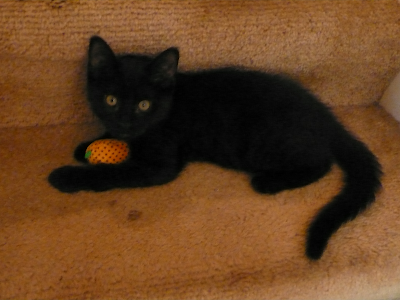 * Just kiddin'. I don't actually meet any of these people, of course.
Labels: Birthdays and Other Filler
Email ThisBlogThis!Share to TwitterShare to FacebookShare to Pinterest

Spin of the Crank would make a great blog name.

And whose rubber strawberry is THAT, then?!

Had to look up "Captain Trips" - but I was never much into the Dead. Your neighborhood's ageing hippies must be more athletically-inclined than mine. Thanks for that lovely bit about your sister in high school, btw.

Hey, who you callin' Captain Trips?

But just to prove my brain is not completely destroyed:
Three kinds of Captain Trips + Barbie + Barbie Emeritus + Serious Women Runners = 6
You owe us one.

So, fobbing us off with a kittypic, huh? It's OK, fob away, blog again another day.
Suezboo (who appears to have lost it)

Quite the cutie you got there.

I live close to the People's Republic of Boulder, and I was mountain biking a trail when a runner appeared ahead of me. I yelled "jogger!" to the biker behind me so he wouldn't mow me down as I stopped so she could pass. As she puffed by, she gave me the evil eye and stated with great umbrage "I'm a runner, not a jogger!". My response was "no one cares"; apparently that is the worst insult of all, at least around Boulder anyway.

PS. I can't use or hear the term "runner" without flashing on Logan's Run.