• Anybody seen the Inhofe family lately? 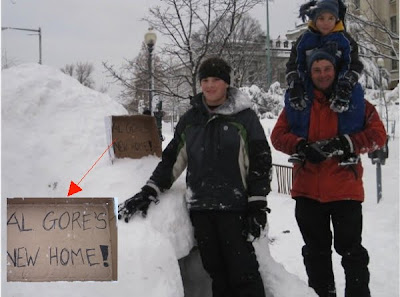 I do hope they're enjoying their summer.

• Yeah, it's been hot here, too--it's the fucking end of July, fer chrissakes--and it's supposed to get hot again, which is good, because the local teleprompter readers were really in their element, and it seems a shame to interrupt. Last week Channel 8 ("Your 24 Hour News Source") had a dietician on two days running to explain which fruits and vegetables ("watermelon") contained a lot of water, evidently for the benefit of the people who knew they needed to hydrate ("not a word"*) but don't like the taste of the stuff.

No doubt you've endured this sort of thing, too, and if so, thank Richard Nixon, since all of this traces to the Happy Talk format bullshit of the early 70s, when White People, as defined by Which Cracker Ass Yelled the Loudest, grew weary of all the bad news, as defined by anything which made White Cracker Ass politics look bad. So now, not only would the local hairdos rather talk about Nothing, most of 'em don't remember a time when that wasn't the accepted practice. So large amounts of money change hands for advertising slots during a ninety-minute festival of people talking about the weather, which you can get for free from any cashier, barber, or salesman in town. You would imagine that in the intervening forty years at least one college-educated news producer would have edged a cautious toe in the direction of a different pool, but no. Somehow it occurs to no one that for a solid week eighteen of every twenty-two minutes of local news was devoted to advising people who were hot to look for shade.

Not to mention that the advice comes from people whose only non-air-conditioned moments in summer are when they get sent out to do remotes on how hot it is.

Two of the most prominent social conservatives looking toward the 2012 presidential election -- Texas Gov. Rick Perry and Minnesota Rep. Michele Bachmann -- now have suggested deferring to the states on marriage laws. That stance meshes somewhat with former Utah Gov. Jon Huntsman's view, and he is perceived to be the most socially moderate candidate in the GOP field. For a party that has in the past remained adamantly opposed to gay marriage, the coming presidential race may be the forum where that position gets a fresh look.

Y'know, a year ago all Mitch Daniels had to do was stand up (okay, and prove to voters he was standing up) to brush aside the Palinistas; today the entire Republican field is one big religious mania, and the rank and file is desperately hoping that Rick Perry will join in. It is abso-fucking-lutely clear that no candidate will be tossing the Religious Right overboard, certainly not when every last one of 'em is trailing Obama by somewhere between six and infinity points.

Saying "Waall, if'n New York wants queers to marry I guess we cain't stop 'em" doesn't exactly seem a reformulation of the GOP brand to me. Not that it seems like a rallying point, either, and we might act like we've all been to a Republican rodeo before. The minute this attitude hurts Bachmann or Perry in the slightest it'll be adjusted right quick. Or, more likely, they'll just deny they ever said anything so darn foolish. When there's no more political mileage to be squeezed out of the thing, that's when the Republicans will "recalibrate". And you'll know the time has arrived, because it'll be accompanied by an insistence that gays are the real homophobes.

__________
* at least not to me; "hydrate", as an intransitive verb, means "to cause to undergo hydration", meaning, to combine with water, which is not what you do when you drink a glass of the stuff, but saying it that way makes you sound all scientific an' shit.
Labels: Things I Say Just To Hear Myself Talk
Email ThisBlogThis!Share to TwitterShare to FacebookShare to Pinterest

Word or not, I enjoy Camelbak's slogan, "Hydrate or Die."

You're fighting a losing battle on that one, I'm afraid.

Whatever one calls it, I always have a glass of water, no ice, with an abundance of red wine.

And the great "recalibration" will take place just after the Ames Straw Poll (13 AUG) after the fucking douchebags have receded from my town, giving it back to the college kids and rich old folks. And people like me.

Dunno about hydrate, but I do like to butter up my corn real good, and I get all sycophantic and flattery with stringbeans, too.

(We're already hydrated, to the tune of around 60%, and obese. So I guess organically that makes us lipohydrates or something.)

Too bad you can't get the CBC evening news where you are. It's a tad heavy on Canadian politics and the Royal Family, but there's not a lot of hooey..

We rarely watched the news when we lived in the US, but we actually watch The National every night.

That's something I've noted on every visit I've made to Canada; even the morning news shows have more actual news than the national US anchor(ed) news does. Must be the latitude...

George Carlin said that the people who own this country don't want us to be informed.

Since so much of what he predicted is coming to pass, I'll accept this as the best explanation.
~

Maintain your osmotic pressures out there, Doghouse. When it's this hot, it takes extra attention to achieve proper dilution.