2012: The Lesser Of Two Banalities 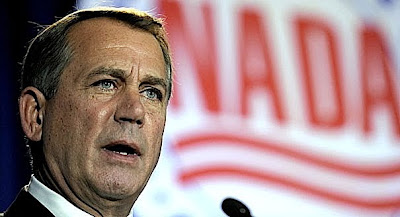 FOR starters, Ron Suskind can go on The Daily Show and try to soft-soap the host, and the audience, about their President, if that's what he thinks it takes to sell books in that Demo, but there's no explanation for Larry Summers and Tim Geithner; a couple years in the Senate cannot possibly have convinced an educated man in possession of both his faculties and the rudiments of current events that there was such a thing as Compromise just waiting for the right promotion to open everyone's eyes to it. Barack Hussein Obama, State Senator from Illinois' 13th District, ran for the US Senate in the Swiftboat and Purple Bandaid Election of 2004. He served in The Deliberative Body during the heyday of the Gang of Fourteen; did they squidge your little tiddle cup to brimming with confidence in the combined wisdom of our two parties? Barack Obama entered national service under threat of The Nuclear Option, and switched branches four years later with Perpetual Filibuster the whole of the Republican agenda. Did you miss this fact? The people he listened to were the ones he put in the position to talk to him in the first place. He was so damned enamored of Ronald Reagan he might've remembered that the Reagan administration was still blaming Jimmy Carter in 1987. The incoming Bush the Dumber administration tried to blame Bill Clinton for the recession it had tried to talk into existence on the campaign trail in 2000, and Clinton had the best economic record of any postwar President. Barack Obama was dealt a bad hand. He played it abysmally. No fucking excuses.

Speaking of the incomprehensible, who had "2 weeks" in the Rick Perry=Fred Thompson Over/Under? Christ, Thompson lasted longer, by the simple expedient of not campaigning at all. How th' fuck does it take you three televised debates to figure out that Perry is a dolt? He's been governor of Texas for three terms now. Isn't that enough? (Christ, he'd already managed to be a national disgrace as Lieutenant Governor.)
By the same token we'd like to know how Republicans keep getting away with this sad-ass parade, how they once again field a daisful of scoundrels, simpletons, and snake-oil peddlers without it being termed the Seven Dwarfs or Eight Loonies or Nine Nutjobs by the Gentlemen of the Press. This is the Republican Presidential Sweepstakes history since 1988 (not that Reagan wasn't the King of the Simpletons and Patron Saint of Patent Nostrum Pushers before that; it's just that, once he became inevitable, the entire party managed to keep its mouth shut about it), but it sure ain't reflected in the Conventional Wisdom.

Could you please just fucking decide if you're a party of complete imbeciles, or just marginal ones? If Sarah Palin/Rick Perry/Michele Bachmann/Herman Cain/Rick Santorum/Fred Thompson/Sam Brownback/Alan Keyes/Gary Bauer/Pat Buchanan/whatever other both-sides-of-the-borderline sociopathic personalities I'm forgetting at the moment can't be elected, or make it through a debate season without setting off alarm bells, then do something about it. Likewise, if you don't like Mitt Romney, John McCain, Rudy Giuliani, Bob Dole, George Herbert Walker Panamanicus Bush--let alone any of the supposed serious, supposed "moderate", alternate-Brooksian-Universe candidates like Mitch Daniels or Haley Barbour--then quit nominating them. That Daniels business began in 2009, and was clearly a measure of how desperate the Money Boys were to save the party from Sarah Palin. So did Mitch Daniels ever mention her name? The goddam money shot of the whole Non Campaign Campaign is him saying that the Culture War might have to be put on the back burner, then immediately turning around and trying to finesse that with Laura Ingraham. If you're even talking to Laura Ingraham you need to reconsider your life's path.

The Bantam Menace worked for Ronald Reagan. What beef can he have with Sarah Palin? The only difference is that Ol' Dutch read his lines like a second-rate actor, while she reads 'em like the alternate weekend weathergirl on Bismark's second-rated channel. Same lines.

Being afraid to cross the base and its even-weirdening collection of litmus tests and town-idiot candidates has worked to keep y'all at or near the levers of Power--and rich--but it means you can't do anything with them once you get ahold of them. Your bullshit moderates have zero courage and even less credibility. Your leading marginally non-certifiable, not-presently-under-indictment candidate has, basically, run a five-year campaign based on how much he's willing to pander to get nominated. The only moderate on the stage is the second of two Mormons, fer chrissakes; who th' hell wants those people on his doorstep, let alone with the launch codes and signing statements?

Ah! So cute when hoping for even a scintilla of realism form the press!

One of the other great side-effects of the great Reagan Devolution is 30 years of the media being completely cowed by the "LIBERAL BIAS!!1! LIBERAL BIAS!!!!!" screeching from the right. So it doesn't matter how completely batshit certifiably insane any particular Republican is--the press not only refuses to acknowledge that plain-sight insanity, it actually bends over backwards to normalize it.

So instead of Bachmann being laughed off the national stage for claiming that vaccines cause metal retardation, we get an ABC News special look at the question, since some say yes while scientists and doctors say no.

I see that the Bantam Menace has been hanging with the Incredible Bulk. What's up with that?

Funny how the party that is unafraid of the "exceptional" word is so willing and able to default by selection of the unfitest to the most unexceptional candidates. Empire in decline. So, what are we fighting for again?

OT, Mr. Riley -
Prominent NPR talk show old person Diane Rehm was just beating up on your poor governor, regarding his past statements on the SS "Ponzi Scheme". Mr. Daniels now expresses some regret about that term, although he notes defensively that 'even liberal economists like Paul Samuelson (sp?) have used the term'.

Lots of old folks in the economically privileged demographics (but generally not independently wealthy) listen to Rehm, as she is well aware.

Could we go with “George Walker Pretzelicus Bush” [Oops, he lost that skirmish too !]

Your rant omitted the Congressional Republicans' report that the way to create jobs was to reduce regulations on importing man-eating snakes ! Why doesn't the tidal wave of ridicule swamp the Republican party for at least 20 years ?

I think I'll name my yacht the SS "Ponzi Scheme"

(come the revolution, of course)

Yeah, I'm laughing along with your rants until I realize I'm crying.