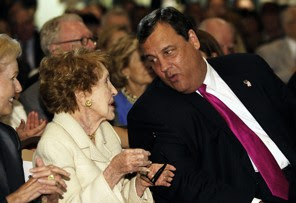 The irony is that these are two of the demographics the Republican party is trying to kill.

IT'S his Big problem, as in weight, and Gene Robinson fills a column with medical arguments against obesity.

Which, of course, is exactly what you'd do if you wanted to call Chris Christie fat for 800 words without actually doing so.

Robinson mentions that Christie's weight became fair game when he entered the public arena. True. I just seem to've forgotten exactly where Gene mentioned the corollary, that Christie's fitness, or lack thereof, would be a national, not a New Jersey, issue, if it were a Presidential issue. If say, for example, Chris Christie decided to run for President.

Look, unlike Gene Robinson I've got no vested interest in who Barack Obama faces. Well, there's a concern over the man chosen to lead The Free World for the next four years, except that's so over, as the kids say. America was a great idea, but it's not going to recover from turning into the place where the literal and figurative descendants of Her Backwoods Illiterates battle the 19th century in perpetuity. It could have made it anyway--overcoming, in the process, the cosmically bad-timing of Harry Truman followed by Dwight David Eisenhower, the Accidental and Unfortunate President followed by The Overpraised Dolt, who get a free pass these days for Perpetual War in Korea and The Post-Colonial Colonial Disaster in Indochina, though, to be fair, Truman really started that one, too--so, okay, Korea and Lifting Dick Nixon to National Office, respectively--but The Wealthy found comfort, solace, and a few loose coins they'd missed earlier in the disaffected rube vote, and here we are, moving backwards on the social fabric while simultaneously traveling at Turing speed in the economic and psychological manipulation of the populace, the bald-faced grab at civil liberties when the previous isn't enough, and incontinent military spending.

So, of course, our present political situation finds itself in the care of a dozen Teabagging Representatives who believe precisely the opposite, that the Key to Grrrr-REATer Freedomland is moving towards The New Feudalism, or Goshen, while lifting the shameful yoke of iniquity our largest political contributors struggle under. If you feel the United States is still capable of rising above this sort of shit, my hat's off to ya.

I don't know, or care, whether Robinson, or Obama, fear, welcome, or are indifferent to a Christie candidacy. Personally, I'd love to see him run. A slobby White guy who shoots his mouth off? That's who should be the Republican nominee. Not just as the physical embodiment of the Base, and the metaphorical embodiment of the party at large. Not just because you look at that dais and say, "Why th' fuck not?" Christie'd at least be entertaining, and his girth would add an element of suspense. I'd like to see him squared off against Bachmann or Santorum, and see what becomes of that vaunted shoot-from-the-hip style.

There is all that. But mostly I'm thinkin' it'd be a good excuse to talk my Poor Wife into buying me a wide-screen teevee for Xmas.
Labels: Palin 2012
Email ThisBlogThis!Share to TwitterShare to FacebookShare to Pinterest

Mitch Daniels was on NPR this AM, pitching his book with Steve Inskeep. That is, lying about Social Security (the Trust Fund is empty; Inskeep said, "Yeah, doesn't it have bonds or something in it?") - apparentky Mitch was calling SS a Ponzi scheme before Perry, and he's modestly p[roud of that ("Democratice economist Paul Samuelson said it first, in the '60s"). Anyway, he's not endorsing anybody yet, but they've been calling him, in case you didn't know. And he likes Christie.

Being a fat shit from New Jersey I can speak with some degree of expertise on fat shits from New Jersey. Christie has all the substance of a mineral water fart. He'll play as well on the national stage as Pia Zadora did in The Diary of Anne Franck.

The notion of a Christie-style bully confronting a smarm like Santorum is certainly potentially entertaining.

I agree with fellow-Jerseyite Tired Hack, though, on how well ol' CC would fare nationally. If the TPartiers and the GOP kingmakers can't see in 5 mins that 2/3 of the Rep. electorate will go "eeeww!" in response to Christie, they're desperater than I thought.

I am an NPR listener also and you'd be proud to have heard me yell and swear at Wee Mitch fielding those softballs from Inskeep.

Now I should find out what my neighbors thought of that early morning mayhem.

You have to admit that every clown car needs a fattie.

Why yes wv, some one with langess.

If only John Candy were alive to do the parodies.
oldswede