Nobody Pepper-Sprayed The Dade County Rent-a-Mob 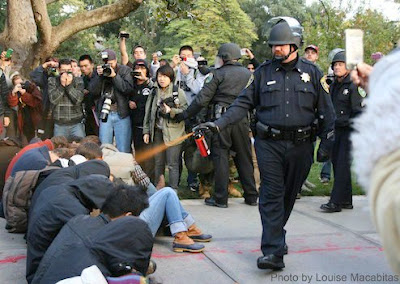 TWO things: first, it does not take a week to convene a Special Blue Ribbon Panel, and it does not take a month to determine that iconic torture video, I'm sorry, tactical application of enhanced crowd control technique above represents something intolerable, both in a legal and a moral sense. Take Doughnut Boy's S&M getup away from him and he's going straight to the slam for aggravated assault. Period.

Two cops suspended. It should have gone up the chain of command, and immediately; you're the chancellor of a university, the chief of campus police works for you. When you saw that video, Ms Katehi, it's heads, not your eyes, which should have rolled. There are only two possibilities here; this is not the action of a peaceable law enforcement officer unable to exit because he's surrounded. Either this was a rogue act, in which case you might want to know how a sadist wound up on your police force, and why his superior on the scene did nothing whatsoever to stop it; or it's a demonstration of a systematic failure taking place on a college campus.

Sorry-assed excuses don't cut it. Why were these thugs out there in riot gear to begin with? In New York, or Oakland, there's a least a cover story for that. Why on a sunny fall afternoon at UC Davis? This was not a response to a threat, at least not to an immediate threat on campus. This was a response to an issue, and that response was a colossal rat-fuck. And the people of California deserve to know why it happened, and why you set it in motion.

Second, we have to ask ourselves whether the measured response

A half-century ago, many parents told their children to ask a cop for help in case of trouble. With police forces now defining their role as more military than civilian, viewing citizens with suspicion and often treating them with hostility, that has changed. Saying the wrong thing to a cop, asking for a warrant before a search, throwing a snowball at an unmarked cop car, legally taking a picture of an official building, questioning a Capitol police officer about why a public area has been closed can lead to threats of arrest, or worse. But on university campuses, the police are often seen as they generally once were: your friend.

or the full-on Greenwald

Although excessive police force has long been a reflexive response to American political protests, two developments in the post-9/11 world have exacerbated this. The first is that the U.S. Government — in the name of Terrorism — has aggressively para-militarized the nation’s domestic police forces by lavishing them with countless military-style weapons and other war-like technologies, training them in war-zone military tactics, and generally imposing a war mentality on them. Arming domestic police forces with para-military weaponry will ensure their systematic use even in the absence of a Terrorist attack on U.S. soil; they will simply find other, increasingly permissive uses for those weapons. Responding to peaceful protests and other expressions of growing citizenry unrest with brute force is a direct by-product of what we’ve allowed to be done to America’s domestic police forces in the name of the War on Terror (and, before that, in the name of the War on Drugs).

The second exacerbating development is more subtle but more important: the authoritarian mentality that has been nourished in the name of Terrorism. It’s a very small step to go from supporting the abuse of defenseless detainees (including one’s fellow citizens) to supporting the pepper-spraying and tasering of non-violent political protesters. It’s an even smaller step to go from supporting the power of the President to imprison or kill anyone he wants (including one’s fellow citizens and even their teenaged children) with no transparency, checks or due process to supporting the power of the police and the authorities who command them to punish with force anyone who commits the “crime” of non-compliance. At the root of all of those views is the classic authoritarian mindset: reflexive support for authority, contempt for those who challenge them, and a blind faith in their unilateral, unchecked decisions regarding who is Bad and deserves state-issued punishment.

makes the most political sense. For many of us who were paying attention at the time it is the fabricated narrative of "The Sixties"--how we went, for example, from the historical record of the Pentagon Papers to the facile morality tales of Dirty Hippies spitting on our returning heroes, or how, in the mind of that great social observer, Andrew Sullivan, we went from correcting, in some part, four centuries of ugly racial history to the equal outrage of four years of some white kids losing out on scholarships to less qualified applicants whose parents could not read because it was illegal to teach them--it's this happy horseshit land where racism and brutality have been banished, except for a few bad apples, or where Mistakes Have Been Made, which is at the heart of the problem. Why on earth does the chancellor of a University of California campus buy into that narrative? Why does Michael Fucking Bloomberg, for that matter? Why does a half-African, former community organizer in the White House remain silent? How, really, can anyone with a modicum of power not understand? Who do we have to fuck--or fuck up--to get some answers?
Labels: Nixon's The One. Reagan's The Beard.
Email ThisBlogThis!Share to TwitterShare to FacebookShare to Pinterest

What folks choose to remember about the Sixties reveals far more than they think. It would behoove all Americans to reflect a bit on how even the Extreme Right Wing Coup that captured the Federal Government in 1980 is a product of the Sixties. There's not space here for making my argument, so I'll just leave a footnote: See especially Rick Perlstein, Before the Storm.

Most folks, especially the right-wingers who control the MSM, prefer to remember drugs, sex, and liberated women (as if any of that was a problem), and forget the awakening of America's youth left and right, and the renewal of efforts that began with the Emancipation Proclamation, only to end when folks complained about President Theodore Roosevelt's dinner guest. Black folks taking it to the streets in the Fifties began again the struggle for democracy, but suburban college kids getting high with CIA experiments gone awry became the distraction that an Alzheimer's patient employed to create mass amnesia (another footnote: Michael Paul Rogin, "Spectacle as Amnesia in Imperial Politics".)

Folks not only cannot remember the Sixties with any accuracy: many fail to recall the Tea Partiers with enough accuracy to acknowledge that some of the central complaints of #OWS are nearly identical to theirs, but they are put forth with more courage by those willing to camp on concrete.

Obama isn't on our side. That's why. He's on the same side as his Treasury Secretary, Timmeh Geithner.

And his Attorney General, Eric Holder.

That would be Wall Street's side.

DOJ has obtained ten convictions of senior insiders of mortgage lenders (all from one obscure mortgage bank) v. over 1000 felony convictions in the S&L debacle. DOJ has not conducted an investigation worthy of the name of any of the largest accounting control frauds. DOJ is actively opposing investigating the systemically dangerous institutions (SDIs).
~

many fail to recall the Tea Partiers with enough accuracy to acknowledge that some of the central complaints of #OWS are nearly identical to theirs,

Do you have a link to support this, James?

There may have been some sort of Tea Party prior to "Rick Santelli's rant", but I strongly question whether it would have amounted to anything significant.

Rick's Rant was a complaint about HAMP: people underwater on their mortgages might not get thrown out of their homes, as right-thinkers believe they deserved. It was not about bank bailouts.

From then on, the "Tea Party" was promoted by FOX News and various Koch Brothers astroturfers (and quickly, by all our corporate media). It consists mainly of the Republican base...people who voted for Bush-Cheney both times, and promotes issues the plutocrats behind it support: tax cuts, spending cuts, and even more deregulation.

Pretty much the exact opposite of OWS.
~

I think James is referring to the way-back Tea Partiers of Boston, thudner. The ones in Native American costumes.

I was referring to opposition to the Bail Out of Wall Street in late 2008 and early 2009 by Presidents Bush and Obama. The Tea Partiers objected for reasons different that #OWS, but they have that objection in common. Of course, if not for the involvement of a Black President, the TP objections never would have been aired. Even so, I think it is worthwhile to take the Tea Partiers at their word, and then hold them to it.

Here's some of "their word": Tea Partiers Oppose bank Bailouts

It refers to a 30 billion dollar proposal to help community banks.

February 19, 2009, was Rick Santelli's 'rant' against an Administration proposal to use unspent TARP funds to help people get mortgage modifications rather than be foreclosed upon.

“The government is promoting bad behavior,” he said, and later implied comparisons to Cuba and asked the traders around them whether they wanted to pay their neighbors’ delinquent mortgages. When the traders started to boo, Mr. Santelli said, “President Obama, are you listening?”

A moral hazard is when the government does something for the little people. Bailing out the big banks with no consequences is Standard Operating Procedure, and you'll find the Republicans (aka Tea Partiers) demanding the repeal of even the feeble reforms of Dodd-Frank.

There's very good reason to doubt the word of the "Tea Partiers."

There is No Tea Party.
~

As a citizen of Davis up until a few years ago, I have to point out that as much as I hate cops the UC Davis cops are pussy cops and there was some sort of mistake here.

These UC Davis cops, they're mostly sociology majors who flunked out into the police. I was on a jury in Davis a while back, and I can tell you, these guys weren't going for the throat. My jury let the perp go, mainly because the cops weren't mean enough to say bad things about his guilty ass.

This is about as benign a police force as you're going to get in the USA. Somebody fucked up, is what happened, and the UC administration and the police chief fucked up behind it. These guys are nursemaids more than cops.

Just thought you ought to know, before you pile on and go medievil on their sorry ass.

Has the NRA weighed in on this yet? You know, pointing out that if those students had been allowed to carry concealed weapons, those jackbooted, pepper-spraying thugs would be dead?

Did you catch the chancellor's silent walk of shame the next night? I've never seen anything like it and am still in complete awe: http://www.youtube.com/watch?v=8775ZmNGFY8

I wish similar treatment could be organized and performed for a few more prominent figures.

In any case, the biggest sufferers from affirmative action aren't even white: they are minorities too. They are Asians.

Well, when I was a child my parents told me never to have anything to do with a cop unless it was absolutely necessary, but then that was only a little over 40 years ago. They weren't part of the counterculture, but they knew then the police weren't a citizen's friend.