We May Not Mean It This Time, But Next Time, Look Out!

David Weigel, "Is the Newt Gingrich surge for real?" November 11 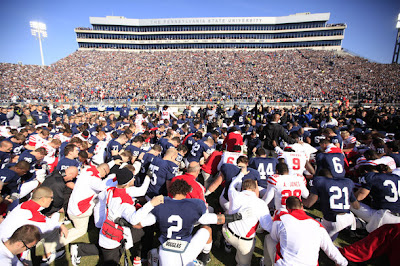 OKAY, so the easy thing to do would be to ask whether kneeling in prayer as a means of getting out from under a horrible situation is common to both the continuing Penn State story and the continuing Hot Republican candidate of the Week routine. And the easy answer is yes. Of course it is.

Does it up the degree of difficulty any to ask about other connections? Jackson wants to know If this isn't the tipping point what, if anything, will be?

Where, now, do we go from here?

Here? I'm done with this! I'll never trust another college coach or program ever again! No. Probably not to that overly dramatic, scorched-earth place. That kind of reaction to Penn State's alleged child sexual abuse scandal would be wrong. To go that far -- to say that our faith in college athletics will never be the same -- is extreme.

But if you're habituated to looking at this sort of thing with a jaundiced eye--or, as I like to call it, objectively,--you have to wonder why anyone would take this long to lose faith. Big-time college athletics was sold to the highest bidder in the late 1970s. College athletics. Why? Global reserves of Boolah-boolah started shrinking? College administrators couldn't see where it was heading?

Or is it rather that no one in America can be trusted to make any decision where large enough amounts of money are involved? Isn't that something which, maybe, should have transcended our native propensity for shit-blind faith back during the Nixon administration?

Is there even such a thing as a record book in college athletics anymore, or is there just an annual listing of schools which aren't on probation, in random order? How long have the Football Factory programs been a disgrace? How long has recruiting stunk like the runoff from a pig farm? How long has "student athlete" been a punchline? Don't tell me that no one realized, twenty or thirty or forty years ago, that dishonesty bred dishonesty.

And don't tell me it isn't everywhere, or that it isn't everywhere in large measure because lying was preferred to having our children go to school with Negroes, or because lying was preferred to losing elections for being soft on Communism. I'm not saying that it wasn't always that way where human beings were involved; I'm saying that at the dawn of the Information Age we took a fresh look around and said, "Y'know what? Not gonna be us that finally learns how to transcend this shit. Pass the remote."

Kneel and pray all you want (hypocrites!). You think a lack of public sanctimony is what ailed Penn State? Jerry Sandusky was all about good works. Maybe one more minute of silence, on top of a decade or more of silence, wasn't exactly the best approach.

Which brings us to Newt Gingrich, theologian, historian, public intellectual, and this week's recipient of the You Can't Vote 'No' bounce.

A lot of people wrote Gingrich into fringe territory back when his campaign collapsed. He’s now polling as high as he was before he imploded. The press understands the GOP electorate in the same way a baby-sitter understands a kid who never seems to be satisfied with the new toy: It doesn’t understand at all.

Right, Dave; it's the Press' fault for being flummoxed by the perfectly understandable series of Teen Idol crushes masquerading as the Republican Presidential primary. (Though, of course, Weigel has the key, not that he's a Republican!). Sarah Palin, Donald Trump, Michele Bachmann, Herman Cain, Rick "Puddles" Perry, now the bloated corpse of some crooked, Southern backwater judge, why, only an elitist would be confused.

Who th' fuck even cares about Newt's oh-so-legendary diss of Paul Ryan? Ma and Pa Kettle? Maybe 30% of the Republican electorate, if that many remember it? Funny how the Press elitists don't understand just how much Republican primary voters think like Slate political columnists.

Oh, but now Newtie has clawed his way back up to where he was before, when he was a 14-point irrelevancy! That's different.

Still: Why him? Why a guy who polls worse against Obama than Mitt Romney?

David Weigel. The man with his finger on the pulse of the Republican party.

I remember reading Dave Weigel before the Post sent him off into the desert, and I thought he was better then.

Perhaps a man to focuses more keenly on his paycheck after having his chain yanked (because the teapers he was hired to pander to screeched in outrage instead)?

P.S. David Brooks was using Penn St. this weekend to do what he always does. Driftglass has a fine retort.
~

I thought that top quote was a parody. "No scorched earth response for me. To let 15 years of child rape shake my faith in the institution would be -- extreme."

It's like watching Cal Thomas wrestling with the Catholic sex abuse scandal, except in a slightly stinkier singlet.

What does that even mean? In better times, times that may not have ever existed, historians could be interesting regardless of their politics. You know, actual ones, not fake ones like Gingrich.

I guess now since we live in a kind of intellectual segregation, we have much different standards. There's "science" and there's "conservative science, sponsored by ExxonMobil(tm) and The Gideon Society"

History is interesting. Too bad Weigel wouldn't know it without a brand name to clue him in.

History is interesting. Too bad Weigel wouldn't know it without a brand name to clue him in.

Yep. And if a Conservative's job is to "stand athwart history, yelling Stop," then textbooks by Conservative Historians must contain a lot of blank pages.

...textbooks by Conservative Historians must contain a lot of blank pages.

Oh, face it. They're all fucking blank pages. And when you heat them up to reveal what's written in the invisible ink, it's all lies but the dog whistles.

Looking at the picture at the top of this post, all I see is a field full of hypocrites. I mean that in the Biblical sense, of course.

looking at this sort of thing with a jaundiced eye--or, as I like to call it, objectively,
Once again, I salute you, sir.