THE Colts were the winningest team in the NFL the last ten years with him; without him they don't belong in the league. What else do you want?

The Colts of Indianapolis At Present play football in a retrotrendy barn built by taxpayers and named by a guy who peddles lubricants. It was built after the NFL sent its Commissioner, Paul Tagliabue, of the Jersey City Tagliabues, to town to good-naturedly threaten to move the team to LA unless we ponied up for a new stadium with skyboxes to replace the blimp hangar, without skyboxes, we built in the 70s to steal the Colts in the first place. Pauly Tags and the Multi-Billionaires Club he shilled for got their taxpayer-purchased pony ride, and LA--which wanted an NFL franchise so badly it had run two teams out of town in the previous decade--got the Cardinals. Or the Vikings. I didn't really pay attention.

The stadium project had an initial pricetag of $500 million. It cost at least half again as much, and probably closer to $1 billion. Not counting operating costs, spiffing-up-the-city-for-the-Super Bowl-we-got-in-the-deal costs, or the $10 million/year additional we had to give the Pacers because they didn't like how the Colts deal was better than theirs. And so threatened to move to Los Angeles.

The owner of the Indianapolis Colts, "inheritor" being a better word, is one Jim Irsay, former hillbilly heroin addict, now Twitter addict. Jim Irsay is really all you need to look at if you actually want to know what's wrong with this country. In fact all you really need to look at are his clothes, "clothe" being a better word, since he either owns one extremely ugly suit, or else several dozen copies of one extremely ugly suit, inspired by Bugsy Malone. 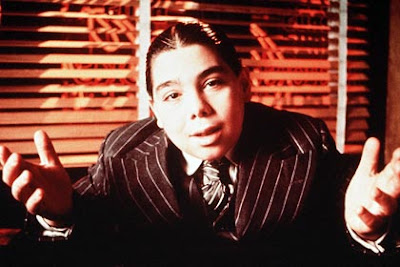 Irsay's father Robert is the guy who moved the Colts out of Baltimore in the middle of the night, and into the loving arms of a city which had built a third-hand version of the Minneapolis Metrodome just for such an eventuality. At the time Irsay was the only member of the Multi-Billionaires Club whose team was not an expensive toy; the Colts represented about 95% of Irsay's net worth. When he got to Indianapolis the whole thing nearly exploded in a divorce--Irsay couldn't have bought the other half of the team, because he didn't have the money--but appears to've been saved by a private agreement designed to save it for the children. Jim Irsay. The perpetual child.

Ladies and Gentlemen, Your Jobs Creator! From one of the least-valuable NFL franchises, to the 17th most valuable sports franchise in the world. Because, with the help of the NFL, lucky spermatozoa, one fortuitous draft pick, and mid-sized market politicians desperate to stay on the gravy train, a semi-literate twitterer was able to get millions in tax dollars without even applying to the legislative process.

Now Manning's hurt, maybe gone; Irsay's team, having done as close to nothing about this as is theoretically possible, is O-and-The Season, and nothing's effected his bottom line, which is guaranteed by the city to remain at sellout-plus concessions-plus parking-plus-revenue from concerts or anything else wholly unrelated to the Colts that takes place in the Barn we built for them.

Meanwhile, there's no NBA season because the owners have locked out the players, the better to get their hands on $100 million they need to keep body and soul together. Until an agreement is reached the Mall of America Simons, owners of the Indiana Pacers, will have to content themselves with the extra $10 million a year the city forked over last year for daring to give the Colts a deal that made the Pacers envious.

So now, with downtown sports traffic down, the local news hairdos--previously dutiful reporters of the wholly-made-up "lost revenue for the city" numbers the Pacers planted--have busied themselves finding Downtown bar owners to stick microphones in front of so they can sing the blues about business being down. I mean brave entrepreneurs who suddenly find themselves without a taxpayer-funded revenue stream.

Was any of this ever brought up in the all-important mayoral election just concluded? Did anyone ask why Teabag Gomer, erstwhile principled critic of Indianapolis' Super Bowl pretensions, handed millions to the Simons when there was no contractual reason to do so? Does the city still dump raw sewage into White River whenever it rains, or send elementary school students to school in un-airconditioned buildings? Whadd'a you think?
Labels: Midwestern Cities Accidentally Governed By Big Dumb Guys
Email ThisBlogThis!Share to TwitterShare to FacebookShare to Pinterest

Doghouse, I quoted you in the regional paper about our friend Mitch's honesty in govt, and the neo-con I was addressing says that the proceeds of the turnpike sale were spent on infrastructure. Is that the case? He also says if the outfit goes bankrupt, it gets returned to Indiana; my thought is that anybody'd be happy to unload a smoking ruin after they've made millions off it. Would you have any idea how much the present owners have made in profit?

if need be, you can reach me in Vermont by e:mail charlesgregory(att)me.com.

Charles, you can email me at doghouserileyblog@att.net and I'll try to address this and I'll try to address it but, briefly a) money is fungible; the Toll Road deal was supposed to pay for the construction of I-69 and any number of other projects subsumed under Daniels' "Major Moves" program. In fact it seems to've paid for about 27 miles worth of building materials, and no labor; the excuse given was that "interest rates were lower than expected" which, in fairness, no one could possibly have foreseen, it never having happened in the history of finance, and b) the "Toll Road would return to Indiana" deal is apparently an example of MItch Daniels Humor, which consists of him saying something patently absurd then watching while Republican lackeys repeat it as though it were true. If Macquarie went bankrupt, why would its tangible assets go to non-creditors? This was a Daniels yuck-it-up response to the (serious, for adults) news that the Toll Road operators were in serious financial straits, meaning that tolls were likely to rise beyond the doubling they'd already done, and maintenance, if any, decrease.

My condolences on retaining your mayor.

While Bugsy Malone may be an inveterate twitterer, he does own a piece of American Literay History, to wit: The Scroll upon which Keruoac wrote "On The Road." He loaned it to the Governor's House Museum in Santa Fe a few years ago and I actually was able to see it live and in person. LA does not need the NFL, it already has professional football at the University of Southern California.

Lord Help Your Colts.
Maybe Danny Hope can bring his blinding insight (Gotta Take Care a' th' Football!) to The Barn of Lubrication. Oxy Jimmy should hire him.