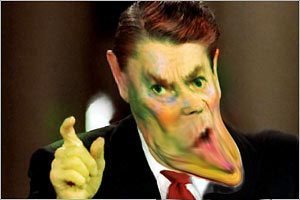 You had to know that Time cover would set Peggers off like a cheap car alarm. They didn't have a cover of FDR weeping over Kennedy's tax cuts! she wails, to which we can only reply, "Yes, Peggy. Because back then somehow people seemed, I dunno, sane may be the right word."

I grant you, I was still in kneepants when he was shot, more interested in baseball than marginal tax rates--not that that's changed any--and almost all of my recollections of Kennedy in the media revolve around Mad Magazine, which my older cousins had introduced me to in the Spring of '62. Still, Peg, I have to say that, then or since, this is the first time I've ever heard someone trying to make the case that the long-lamented Camelot was some sort of betrayal of the New Deal. If I didn't know better I might suspect it was the first thing that popped into your head in response to that Weepy Ronnie cover.

There wasn't any cover of JFK shedding hot tears over pot-smoking hippies wearing McGovern buttons! Now, this one I do remember. You're absolutely right. No one ever mentioned Hippieds, the defeat of George McGovern, and a possible link to falling Democratic prospects. Not until now. Not until you.

Could I be correct that they only front-page weeping Republicans, and only laud conservatives when they're dead?

Could I be correct in imagining that "front-page" is not a verb? And fer cryin' out loud--Time never lauded Reagan before he died? Are you crazy?

Actually it was a good piece in that it suggested a simple truth: The portion of the Republican Party that is based in and lives off the American capital has lost its way.

Which is why you spent the first 10% of your column complaining about the cover.

They used to stand for conservative principles and now they stand for--well, whatever it is they stand for. I've written the past few years that the modern Democratic Party has been undone in part by its successes, that it achieved what it worked for in terms of Social Security, the safety net and civil rights, and that a great coalition has now devolved into a mere conglomeration of interest groups. I don't see why Time shouldn't similarly indict the Republicans.

I think many of us would agree both parties seem like exhausted little volcanoes, and that they are driven more by hunger than belief.

Let us try to behave like experienced woodsmen and not lost and homesick Boy Scouts stumbling through the pines. Let's calmly back out of here the way we came in and see if we can figure out where we went wrong. Roosevelt as a tax-raising automaton? These are the sort of Sunday School tales where Reagan's one-man-against-the-mob heroism resides. FDR was elected in the teeth of the Great Depression. 1932 was the nadir. GNP fell 13.4%. Unemployment was over 22%. Farm prices had fallen by 52% since the crash. We can actually go on like this for the next couple of days. Hoover, belatedly, has raised the top tax bracket from 25% to 63%. He's soundly defeated. What is Roosevelt expected to do? GNP is down almost one-third since 1929. Tax rates have already been increased, and he's just been elected to cure the nation's ills.

Wait. Before we answer, let's consider Reagan, who is elected in 1980 after campaigning for sixteen years. Reagan's bête noir in all that time was the National Debt, deficit spending, and the growth of government. That he in fact left office having seen all three increase drastically is well enough known that hagiographers like Nooner must actively ignore it. But here's a little matter she may not know:

Despite the fact that he took office with a GNP in near-freefall, while Reagan assumed office (as a budget cutter) just as we came out of a recession, the only time Franklin Roosevelt ran greater deficits (as a percentage of GNP) than Reagan was during WWII.

Yet somehow in Peggy's world FDR is supposed to grace Time's cover weeping over a totally unrelated tax decrease in the 1960s. What then of Tax Cuttin' Two-Gun Ronnie, who in fact raised taxes in 1983, 1984, 1985, 1986, and 1987 (and presided over the largest state tax increase in history)? Maybe he should be on the cover gouging his own eyes out.

He increased our security by increasing our strength and removing from the historical stage an evil ideology that had become an evil empire. "The Soviet Union fell." It didn't fall, somebody pushed it.

Yes, single-handedly, Ronald Reagan's batshit insane spending* bankrupted the Soviet Union. The same Soviet Union that US analysts had realized in the early 70s was on the verge of it. This is the tune people like Noonan whistle while marching past those record deficits. It's a wonder you can find anywhere to walk anymore without stepping in batshit. I really imagined that after that Colbert smackdown ("Who really won the Cold War: Reagan or John-Paul II?") Peggy might put this one away for good, or at least start watching where she was plodding.

Of course Reagan-fluffing has been such a commonplace of the modern junk culture for so long that it, like weekend Elvis Movie Marathons and breathless obsessions with mouth-breathing (now or formerly) blonde "celebrities", mostly serves to remind the middle-class curmudgeon that "Hermit" was once a viable career path. It is now nearly impossible for the old to convince the young that we could have avoided this rank garden altogether, that it is not some well-sited organic plot long on sun and carefully measured of manure.

And Noonan, as you already know, has tilled that soil for thirty years and harvested nothing but turds:

Reagan should be an inspiration for every person in politics who stands for something at a cost and because it is right.

But he should inspire, he shouldn't demoralize. Republicans should stop allowing the media to spook them with his memory. Democrats should stop resenting him and dreaming up new reasons behind his success.

Pfffft. Ronald Reagan didn't pay a cost, and he did damn precious little standing for anything. He is precisely that point where American politics stopped paying attention to either principles or results and started Braking for Unicorns. He was a hired pitchman for Western real estate interests (it was William French Smith and Ed Meese, not Hollywood, which made Reagan wealthy enough to mount that permanent presidential campaign). He was a rallying point for people who felt aggrieved by Dirty Hippies and Free Negroes, and he happened to reach the Presidency just as America was trying to wish away the cold and ugly facts about itself the Sixties had brought to light and to insist it would continue playing Post-War King of the Hill forever. He's the dysfunctional Family Values man, the liberator of concentration camps in Beverly Hills, the genial benefactor of genocidal "freedom fighters". If the old fraud had the opportunity to shed a tear over what the Republican party has accomplished in his wake it would be in self-recognition, the avoidance of which is, like, the Republican Twelfth Commandment.

A victim of success? Where, dear Peggy, is the Reagan "conservative" legacy outside the Soviet heroic-realist statuary in your head? In disastrous federal deficits? In the ability of a next generation of charlatans to get elected promising smaller government without bothering to mention they'd make it so by looting whatever wasn't bolted to the floor? In the idea that "Tear Down This Wall" was some sort of magic incantation which would transform the Middle East? Reagan's a hero because you say he is. Let us remember you were saying the same thing about George W. Bush just eighteen months ago. Jesus wept then, too.


* I sure don't mean in any of this to suggest that Reagan did not have help, including some overt aid and a lot of mere cowardly retreating from a nominally Democratic Congress.

Thank you. You'd think we could put The Myth of Reagan to bed by now. Would he really be sad about what Bush has done? Only the unpopularity of it, I suspect.

Nixon, Reagan, Bush, and Bush: What a sorry lot of Republican presidents we've suffered during our lifetime. We've got companies fleeing Michigan, your northern neighbor, because bridges are falling down on cars. The Republican solution? Cut taxes! (For the wealthy.) Maybe it is the fluoride in the water.

Haaaaahahaha
Experienced woodsmen? This bunch? That is richer than the soil in the notional organic plot.
You slay me, Doghouse.

"He is precisely that point where American politics stopped paying attention to either principles or results and started Braking for Unicorns."

I'm here via KathyR, and the sentence she cites above is where I insisted on reading the post out loud to my husband. (Though I almost started reading aloud at "'hermit' was once a viable career path." This is brilliant.

Just excellent. I fear that our dumbed-down Hannitized populace will make the Reagan myth even stronger, facts be damned as usual. For Noonan and the other top ten-percenters, the factoid of Reagan the Fiscally Responsible Tax Cutter is received truth; after all, he cut their taxes and he talked a lot about reducing deficits so what else matters? That he presided over the single largest tax increase for working people ever is flotsam for the memory hole—after all, it's taxes on the wealthy that are a burden, taxes on the rest of us are but the small price we pay for Freedom™ and the trickle-down benefits of capitalism. That this same increase formed the bulk of the Social Security surplus since evaporated by Republican Congresses and our present Frat Boy Wonder is another inconvenient reality.

As to Time never lauding Reagan, my god, she could start with the "Our Long National Nightmare is Over It's Morning in America" strokefest which began in the magazine before he was even inaugurated in 1981. And speaking of Reagan-fluffing, does anyone remember Hugh Sidey?

During his orchestrated ascension to national prominence, I and many of my pals immediately saw candidate Reagan as Howdy Doody from the first glimpse of his head bobbing senility. His strings were being pulled by others, and there was no evidence of a real brain in his wooden head: just a Hollywood actor playing his part "sincerely".

The formula for electing woodenhead Reagan was also successful for those behind the spoiled brat retard Bush II.

What a bunch of flamingly ignorant, willfully blustering yahoos his destruction of educational financing has generated ever since the USA "won" the space race and therefore didn't need to prioritize learning skills.

It's hard to hold a lot of hope for this country while Reagan is still, after all these years of easy-access information at "responsible" reporters' fingertips, uncontestedly held up as a shining icon of "pure" heroism. But that's Hollywood for ya.

I know I don't need to tell you, but I will anyway, keep it up, guy. Like Wolcott, the Rude Pundit and the General, your wit invariably puts the smile on my face and produces the loud guffaw on frequent occasion, much to the alarm of my placid cats.