He's Like A Taller, Younger Mitch Daniels, But Now He's Got A Steet-wise Latino Sidekick

SOME time ago, a month, maybe (I don't know, because I don't really care), Paul Krugman pantsed Joe Scarborough, probably on Morning Joe, if that's still on. And Scarborough, whose major rhetorical limitation in this was, and remains, the fact that he can't seem to understand the argument, did not take it well. Ranted on his show, if that's still on, ranted in Politico, then agreed to a "debate" with Krugman hosted by Charlie Journamalism Rose, or, as I like to call it, A Bridge Too Far. By all accounts, by which I mean the one or two I happened across, Krugman was knowledgeable, Scarborough was a fluffed-up entertainer, and the result was sorta anticlimactic, because, well, we already know the answer, and the whole point of the exercise is to get some moron to admit he's a moron when his solitary purpose is to avoid admitting he's a moron. Or, put another way, another public affairs program.

And now, three days later, The Ol' Ladykiller's rounded up an Economist co-author to help squeeze out another 900 anti-Krugman words. And the result, as you might expect, reads like a combination introduction to the chapter on Keynes in a freshman econ text written by an anti-Keynesian, and a megachurch hymnal.

Go read it, if you hafta. Meanwhile, the problem is not that Joe Scarborough can't distinguish between the theoretical and the hypothetical, or tell either from apodictic certainty, or stop throwing shit at Paul Krugman; the problem isn't that his party is in the same dire intellectual straits it's been in since 1964. The problem is that it's slowing beginning to dawn on them.

And the bigger problem, of course, is that they're the ones who get to solve it.

Scarborough's vote doesn't count any more, so he can actually look at The Defense Budget now instead of just rubber-stamping it. This, in practice, means squinting at the USA pie-chart and noticing that some portion of it is dedicated to Defense:


Military spending can be reduced, and our decade-long wars can be brought to an end.


So I guess in retrospect it's too bad we didn't choose to pay for those wars as we went along, huh?


The Pentagon should move beyond a defense strategy based on a Cold War threat that no longer exists. Americans also know that costs for Medicare...


Th' fuck did Medicare get in there? Just kiddin'. I know how it got in there.

So, okay, uh, for the record that's an offer of 1) "spending" to be "reduced", 2) wars to be ended and no-longer paid for, and some 3) Reshaping Our Forces to Face the 21st Century Threat talk, before we headed straight for the pocketbooks of the Poor. It's sorta like hearing your prom date say "I guess tonight means we should talk about my surrendering my virginity to you. And whether we should wait five or six years. Or whether it should be more, like the ten years it'll take you to fully accept Jesus Christ as your Personal Lord and Savior, to my satisfaction." And saying to yourself, Welp, sounds like the best deal I'm likely to hear.

These will qualify as Big Ideas when you put numbers to them. And when you decide between "a military comprising boots-on-the-ground, solid employment and advancement opportunities", and "a bunch of programmers running US foreign policy and makin' shit blow up". Whadda we do with twelve aircraft carriers, Mr. Post-Cold War? Which military bases are we closing, which overseas presence reducing or eliminating? Will the last man leaving the Air Force kindly turn out the lights? Otherwise, you're Just Another Post-Wingnut Wingnut showin' the Rubes the Genuine Ruby first. Fuck you. You fucks know Defense cuts won't happen, and that the "Social Entitlements" side of the ledger--and which side introduced that bit of Luntzian disintel into the discussion, hmmmm?--has but a single brake, namely, the point where the peasants get the torches and pitchforks. What's the latest AEI over/under on that happening by 2050, Joe? I know y'all know.

The Republican party is not the only reason our Defense spending has continued along at WWII levels since, well, WWII. But the Right is historically the site where International Paranoia gets shoveled into Forge of Freedom. And if there's a major reason why we're "still in Cold War Mode" it's the cosy perpetuation of expensive weapons systems that had no other reason to exist. Everybody screamed about the pain of the Peace Dividend, but it was the Right that screamed loudest, and two Republican presidents who ignored it for a decade, or until George Herbert Walker Bush realized he was in a reelection fight. Here's what they accomplished. Maybe Professor Sachs will explain what those steep slopes there mean. 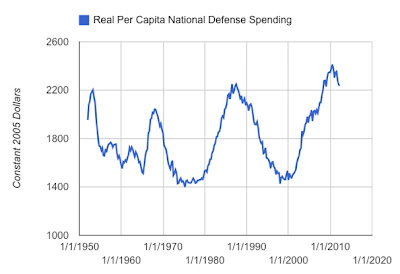 Been sayin' this since you were still kissing that Reagan poster over your bed every night: I'll believe it when you cut it. I'll believe it when you fucks put serious proposals on the table, and vote on them, up or down, with the lights on. You wouldn't face Social Security at the height of Reagan's Ku-fu grip on our polity; you've tried, ever since he backed down, to fuck everyone out of it without their noticing. Social Security, Medicare, Medicaid, and Defense. Put up actual proposals, and vote on 'em. You control the House. Start th' fucking process. Let the Senate take the heat for refusing to liberate everyone under 55 from Social Security. Let the President veto your health care solutions. You've been talking about this shit for thirty years. The solution to the problem is for your side to own it.

Y'know, I usta think the problem was you doubling down every time you lost a bet. Now I think it's that you see a Permanent "Conservative" Supermajority everywhere you look, and after Reagan there's only a few of you who understand enough science to know what "red shift" means, and none of them's willing to admit it.

And now that Rand Paul's the 2016 nominee, really, no shit, we're beyond asking whether you people can learn from anything, and on to the question of whether you'll ever learn to modulate the voices in your head. Did you happen to notice that two-year slogfest that ended in Mitt Romney? You wanna start earlier now? Rand Paul vs. Rick Santorum, the winner to face Marco Rubio?

I have no idea who assigned this. I'm 59, and I honestly had no idea there was that sort of Evil loose in the world. I suspect hazing might be involved, or they just enjoy making each other eat disgusting things at Politico for sport. But, really, no. Cellphones and a willingness to tolerate gays and blahs is not the Answer. Sorry, the only Answer left for Republicans is to actually begin looking for an Answer. As in, for real, not actually looking for some PR gimmick that works for a few weeks. Blame your parents.


Ah, the entrepreneurial wing of the party.


Did you do that on purpose, or was that the actual top of the list?


Most of the rest — $97,576 — went to administrative costs, legal fees, office space and an intern program. Allen said that this cycle the group expects more of the money to go toward candidates, since much of its costs were one-time fees and the administrative burdens will be more on the 501(c)4.

Look, kids--boys--take whatever you didn't really spend of that 100 large, get yourself a nice hotel, and spend a day--one day--examining your own beliefs, the central tenets of Republicanism, the political realities outside New England, and the substantive arguments of a theoretical Rand Paul candidacy. Do it seriously and honestly. Because, trust me on this, someday you'll wish you had something to look back on and laugh about.

Labels: Palin 2016
Email ThisBlogThis!Share to TwitterShare to FacebookShare to Pinterest

So far as I can tell, these days Republican/conservative beliefs are basically: Liberals are EEEEVIL! Minorities are EEEEVIL! Wimmen are EEEEVIL baby killers! Everyone but white American men is EEEVIL! Guns are good.

ah, Doghouse, what splendid writing wasted on the likes of Rand Paul! The central tenet of modern Republicanism is "get the money." That's all - nothing to introspect about even if they were capable of it.

We're in a cycle; just as in the first Gilded Age, wealth and power are on top. When it gets to a torches-and-pitchforks level, there will be something like the Progressive Era or the Great Depression to rein them in somewhat. That's the best we can hope for, and hope we live to see the cycle turn, since if it doesn't our dotages are sure gonna suck.

Rugosa- "When it gets to a torches-and-pitchforks level"
Nobody owns a pitchfork anymore. But a lot of people own guns. And, the people who should be most afraid of a popular uprising are pushing for more gun ownership. WTF?