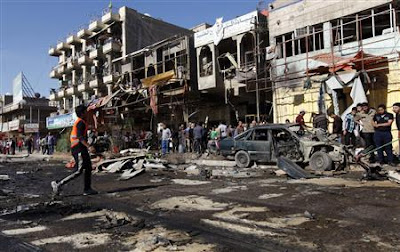 HEY, at least you all finally got the Anniversary Terrorist Attack you've been predicting for the last ten-and-a-half years.

I've seen that Saddam Statue Toppled video four times now, and it's just 8:30. No irony, no mention that the goddam thing was a fake, designed to help sell The Worst Product Of The Past Decade. I watched a panel on Morning Joe talk about "whether it was worth it". It was made up of people who were war cheerleaders a decade ago. There's a surprise.

Got to watch them run a piece about how John Kerry and Nancy Pelosi were For the War Before They Were Against It, Neener Neener. No clips in there of MSNBC war flogging. No shots of Keith Olbermann in battle dress.

Gee, I hope Slate's got the whole gang together to talk about how they got it wrong. Maybe I shouldn't have said that without looking first. Happy Anniversary, you Fucking Fucks.

Labels: Half-Remembering the Bush Administration
Email ThisBlogThis!Share to TwitterShare to FacebookShare to Pinterest

I saw the MSNBC thing too. I like how Kerry and Pelosi were talking about the need to disarm Saddam without actually stating that we needed to start a war- as though wanting to defang Iraq is the same things as wanting to invade. Nice hackwork there, MSNBC.

It is part of our lasting sham that nobody from the Bush administration--including ol' Chimpy himself--will ever stand in the dock at the Hague to answer for their crimes against humanity.

Bush, Cheney, etc. should each be stripped, scourged, and nailed to a cross.

The cross image might carry the wrong connotations.
There are other possibilities.

Vlad, not if the cross is upside down.