• For one thing, if there's a better argument at this moment against American Exceptionalism than the "resurgence" of Jeb "People Say 'The Smarter' Like That Took Work" Bush I don't know what it would be. Nobody asked for Jeb Bush, did they? Or nobody who wasn't stupid enough to've also backed his brother? The  Daily Beast [Caution: Daily Beast] wants to know whether he can "Save the GOP and End Its Emerging Civil War?" This is one of those interesting moments in life when A Particular Person (or media Titan) asking A Particular Stupid Question actually answers the Question for you, for all intents and purposes.

[Rereading the above, it occurs to me that I grew up before there were Star Trek nerds, or D&D clubs, so, depending on outlook, it may've been that you had Some Nerd, or Know-it-All, damning himself with Questions for Teacher that Involve Azimov Quotes every five fucking minutes from second grade on. It was a rare thing for me. The one I recall is when that smug little Know-it-All Philip, who insisted on being called Philip, not Phil, raised his hand, rose (he was the only motherfucker ever did that), and informed our second grade teacher that all the Harlem Globetrotters were from Holland.

So if The Beast wants to know, then we all know what the answer is.

I'm sure you're already aware that Bush is out there simultaneously plugging and distancing himself from his new book. And if nothing else, it's time to salute the only Republican who may've foreseen the results of the 2012 Presidential elections. I mean correctly. Either that, or he's the first slimy bastid who had a book ready to go just in case, which makes him an Entrepreneurial hero to his party. Sharp move either way. For a Bush.

Is there someone out there who won't admit that Jebbie did, in deed, lose the 2008 and 2012 Republican primaries, not by not running but by being so bad a bet he couldn't raise money? He "didn't run" like Mitch Daniels and Haley Barbour didn't run. Well, in 2008 Jeb was a Bush, which made him technically ineligible. But otherwise.

And now, suddenly "Jeb can speak Spanish", "Jeb's wife is Mexican-American" and "He has several children currently in South American prisons" is a selling point. Salve those wounds, Governor! The Nation That Rejected Your Ass Every Time It Was Offered needs you!

• Here's the only thing I feel like saying where "Rand Paul" can be inserted, as opposed to something being inserted in "Rand Paul". I enjoy Folly. I enjoy participating in it, occasionally even by design. I'm in favor of Folly qua Folly, and Folly with some serious point behind it. It makes a fine pennant, but it's a piss-poor battle flag. And it's even worse in a sham attempt to get more Xanax.

There is absolutely no reason, none, why any half-literate citizen of the United States should imagine that a declarative statement from the Attorney General, the President, or anyone with a microphone would mean diddly about future actions. I know Republicans want to forget George W. Bush, but fed cryin' out loud. The Bush administration announced in the spring of 2002, if not before, that it had the right to send US troops into Iraq, Iran, Syria, Venezuela, and San Francisco based on how it chose to read forty-year-old UN resolutions. Which, of course, are the gold standard of World Government Pronouncements so far as the Republican party is concerned. And it could do so regardless of what the Congress did. Dick Fucking Cheney simply announced that he was no longer Vice President, he was Vice President Plus.

Sure, sure, we have one-third of a million men and women locked up for drug offenses, a fair number of 'em put there without the use of drones, and not an insubstantial subgroup of whom got there because we've been violating the Posse Comitatus Act since the early 80s. But, sure, it's the best use of Official Libertarianism's bully pulpit to defend against the possibility of the EPA catching some rancher dumping diesel into a river somewhere.

• Who said What on the Where now? 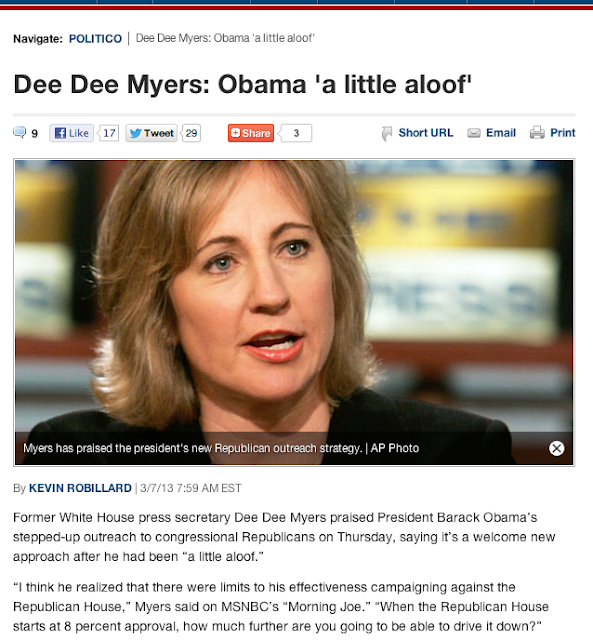 It is the stated opinion of No Less An Expert Than Dee Dee Myers that if the Republican House has "8% approval" it is unseemly to try to press a political advantage which might make it alter its War of Obstruction.

Just the kind of thinking we could use in the U.S. Senate, doncha think?

Our Attorney General and his boss are fucking disgraces, and it pains me when I see liberals who would rightly call them out if they were registered as Republicans try to defend their horse shit.
~

I have to admit that I'm completely fascinated by the idea that Obama has been "aloof" and "not reaching across the aisle enough" as the underlying cause of the current gridlock.

Since Obama's starting position in negotiations with the GOP has always been to offer them everything they want in exchange for virtually nothing, I have to wonder just what he will have to do before someone in the MSM finally notices that Boehner's wrecking crew will never accept any deal with the president.

The notion that because the Republicans have managed to bear up under the strain of being universally loathed across the country, we must therefore capitulate to them because after all, we cannot increase the national loathing for them - that is downright remarkable. To avoid the obvious Godwin, by that logic we need to dig up Bernie Madoff and apologize to him: sure, everyone hates him and he stole a billion dollars, but on the other hand we can do no more to him.

And still they rule.