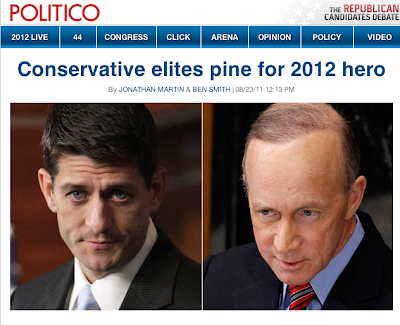 It's like one of those old "Can You Spot the Errors?" calendar illustrations, isn't it?

DON'T you feel, sometimes, like "reality", or "Hell", is the Science Dork lunchtable, and your mealtime, peanut-butter-in-the-orthodonture conversation is drowned out by a strategically-placed loudspeaker blasting the Cool Kids' chatter?

Listen, "conservative" "elites": Mitch Daniels didn't decide not to run, or at least he didn't really decide not to run until after he'd been handed his hat by the only Test Grader you guys recognize, the one with the Money. He wasn't gonna run anyway, because he's married for a second time to Miss Havisham, but that's just another millstone y'all have to bear: where you gonna find the required Altruist in a roomful of Randians in Spock ears?

And by the way, if co-someones can describe the Journal's editorial board as "the bible of conservative intellectual orthodoxy" then 1) you just need to get out of town, and 2) they need to find employment somewhere where the intricacies of metonymy and subject-pronoun agreement are not quite so obviously displayed.

Oh, Death, where is Thy big sloppy tongue kiss?

“It just does seem to be a little crazy in a year when you have a chance to win the presidency that a lot of leading lights aren’t putting themselves forward,” said William Kristol, Weekly Standard editor and indefatigable Ryan advocate, who hopefully brandished a Ryan-Rubio button on Fox News Sunday.

Oh, Death, where is Thy stupider brother?

“All this comes back to the failure of Mitch Daniels to get into the race — he was the guy who had the potential to unite the conservative intelligentsia and the quirky, eclectic types like me,” said New York Times columnist Ross Douthat, the co-author of the manifesto that aimed to launch a populist Sam’s Club conservatism.


"Quirky and eclectic". But enough about your religious history, Ross. Didn't you get a job at The New York Times--Sweet Jesus, give me a reason to go on!--by explaining to its Editors and seven or eight other people who got free copies of your book that the Republican party needed to transform itself into a sort of crypto-Rockefeller ruling elite by faking interest in the working class? And didn't you, three years later, just write a column extolling the misunderestimable virtues of Rick Perry?

So, I'm sorry, but now you guys don't want a President who struts around an aircraft carrier with his nuts cinched like a 50-year-old stripper's cleavage? Now you're afraid of a Jebus-spouter, if he or she doesn't just save it for the rubes? Now you're opposed to President Hair Dye? Maybe you should have mentioned this sooner.

I'd like to see Ryan run, just to get him out of Congress.

The more of these G.O.P. assholes and nutjobs we have running for president, the more campaign spending stimulus our economy will get.

After all, our phony opposition party allegedly on the other side of the aisle isn't giving us anything.
~

So, I'm sorry, but now you guys don't want a President who struts around an aircraft carrier with his nuts cinched like a 50-year-old stripper's cleavage?

Guys, I'm starting a drive to raise funds for the George W. Bush Presidential Library. Any small amount will help; we just need enough money to pay a stone mason to chisel that sentence over the main entrance.

Sounds like the Dead Parrots at The Politico aren't just 'pining for the fjords'.

Chirolaughtic: that's, as the Brits would say, my speciality.

I don't get it. Did they just assume the Rubes were in on the joke for forty fuckin' years? Greedy, venial, self-righteous; these attributes I expect from Republicans, and they don't scare me. Competent Evil will presumably put Survival first (for themselves, if for no one else). Clueless, Flailing Evil doesn't have that safeguard, and I find that deeply frightening.
I cannot see Perry, or Bachmann, or Cain being elected President, but then, I thought the same about Bush the Younger. Over-estimating the intelligence of the American Electorate is a mental pitfall of mine.

Quirky and eclectic. So that's you, Ross?

Have we really fallen that far?

Oh, Ross... "Quirky and eclectic" sounds really interesting if that's how you're describing yourself on ChristianMingle.com... not so much for the audience at the NYT editorial page.

Of most sensible folk.

While it's fun to poke fun at president bachmann or president devo-hair it's just as likely that 50.1% of the elecorate really take them seriously and love their god bothering, pull yourself up by your bootstraps flavor of horseshit. I see it every day. At first my mind reels and I think they're joking.

Somehow we are lucky enough to live in a time when half the US voters are Barnum's minute by minute suckers.

So if what if they capture both the conservative intellectuals and the quirky eclectic types? Combined that's a total of like 40 votes nationwide.

The GOP does not need the presidency when they can get 98% in their present configuration. Sayin' shit, sayin' no, just sayin' we can dominate in a fucked up world and keep the cream at the top by appealing to the dregs at the bottom. Kinda like Rush. Shit, that's it. We got King Mugabe Rush.

Monday's Wall Street Journal offered an editorial reminding those who have failed to pay attention that every single Presidential race since 1960 has been decided in favor of the guy with the best hair. Hence, the guy on the left in your image may well beat President Obama, but the guy on the right has no chance. The early withdrawal of Donald Trump from the race, of course, signaled that once he brought up the birther issue, he would need produce papers for his toupee, and that would sink him.

Quirky and eclectic are fine adjectives. But anyone who uses them to describe himself needs a punch in the nuts for being simultaneously trite and pretentious.

This all could have been avoided if only Elmer Gantry and Ayn Rand had had a love child.

prairie curmudgeon: The GOP does not need the presidency when they can get 98% in their present configuration. Sayin' shit, sayin' no, just sayin' we can dominate in a fucked up world and keep the cream at the top by appealing to the dregs at the bottom. Kinda like Rush. Shit, that's it. We got King Mugabe Rush.