You Expect Full Credit For Turning In This Paper Sixty-Five Years Late? 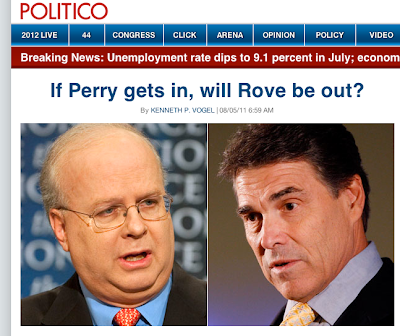 SURE sure, it's Politico. But then we're the country that hosts Politico, and worse, like agar-agar hosts the pneumococcus bacillus. This is the fucking United States of America, which used to mean something; if Rick Perry and Karl Rove are significant players in our national politics it no longer means anything better than Hold Your Nose. Rove's artificial genius is founded on the fact that his man--the poster boy for unearned privilege, alcohol-induced Korsakoff's syndrome, and the worst President this country has even been inflicted with, bar none--"won" an election decided by the Supreme Court in a fucking decision it tried to disavow at the same time it announced it. If America really was exceptional, in a good way, that never would have happened. If America had the fucking sense God gave most mammals Karl Rove would be hiding out in another hemisphere. Meanwhile, Rick Perry is almost literally a Bag of Hair. A feud between these two is not news, because neither of them is anyone worth giving a shit about. And we're not going to solve anything until the public discourse is reported on by people who are honestly dedicated to the truth, who think it matters, not overgrown versions of the kid on the playground who'd eat a worms for a quarter.
Sorry, this started out to be the caption to that photo, but for fuck's sake. You don't think there's something deeply, deeply disturbing about a country where those two holes in the atmosphere play a meaningful role in politics? I don't know how anybody believes that Rick Perry is a game-changer, a bull in the bullpen, a formidable candidate assuming-the-race-will-be-decided-on-Phony-ass Telegenics, a sort of bargain-basement version of The Candidate, other than the fact that it worked for Sarah Palin * four years ago, when "Hey, she's hawt" was the only Right/Redneck reaction (that is, public reaction) that initial weekend, while everyone in the country with an IQ above hypothermia went "Wha' th' fuck is this idiot the Republican Vice-Presidential nominee?"
Okay, so there is reason to take Rick Perry seriously as a candidate, because, c'mon, lookit who's actually been President the last few decades. It doesn't mean you can't register a little shock.
Jacob Weisberg, " Lessons of the Crisis: The debt-ceiling debacle revealed that politics is broken in every possible way and there's no point in explaining complicated matters to the American people." August 4

At the level of political culture, we have learned some other sobering lessons: that compromise is dead and that there's no point trying to explain complicated matters to the American people. The president has tried reasonableness and he has failed. It has been astonishing to watch Obama's sheer unwillingness to give up on his opponents after their refusal to work with him on the stimulus package, health care reform, or the extension of the Bush tax cuts last fall. A Congress dominated by mindless cannibals is now feasting on a supine president. But surely even he now realizes there's no middle ground with antagonists whose only interest is in seeing him humiliated.

This is what I came here to say something about, and it's similar. Namely: where th' fuck have you been? It isn't like this behavior is something new in the Republican party. This is how the Republican party has been behaving for forty years now. This is the economic version of Adam and Eve on a Dinosaur, and a Christmas Tree on Every School Lawn Republicanism. And it's not like nobody's mentioned this in your adult lifetime, Mr. Weisberg.
What it is like, is like everybody agreed to treat these people as though they were not seriously disturbed, and disturbing, in exchange for fewer angry phone calls, now emails. The party of Jerry Falwell and Pat Robertson, of Phil Gramm, eventually, and Newt Gingrich, had to be treated as though its crackpot schemes and transparent scams and residual (ha) racism and Bronze Age skygazing were just alternate ways of ordering the universe.
Seriously, this didn't just all th' sudden jump up and bite you in the ass, did it? In your adult lifetime, Mr. Weisberg, the US Congress has contained Strom Thurmond, John Stennis, and Jim Eastland. Okay, sure, they were all Democrats, but it ain't like Ronald Reagan didn't out-crazy a coot in nesting season. C'mon. The mass-market media has been cozying up to Republicans since Reagan got hold of telecommunications regulation, not that Big Business and Republicanism are particularly strangers in the night. Your bosses like tax cuts, lack of supervision, and stock-market upticks. The attitude trickled down. Now the Republican party is all intransigent and crazy and shit? Now? By any chance was that Schiavo business the first time you noticed any religious nuts in those parts?
It's been crap all along. And not the sort of crap people repackage as Tootsie Rolls **, either. Really disgusting crap. And no one called it. People fucking celebrated the "roaring" "success" of "Ronald Reagan" in the 1980s. After that it just became a question of how big the scam could get, and how much lower, ethically. If any.
_______________
*And, earlier, for JFK.
**And no offense intended to the fine people at Tootsie Roll, Inc. It's just the old saying about how someone couldn't tell a Turd from a Tootsie Roll, coupled with the fact that big name confectioners were among the most gleeful of compliers when Ronald Reagan asked all patriotic industries to please cheapen their products while obfuscating the change from consumers, with their Protections and their Complaints and their contribution to Democratic causes, although this was something the candy companies had pretty much been doing on their own already. Merchantilism, schmerchantilism. See that Stephen Jay Gould essay on the incredible shrinking candy bar, circa 1978 if memory serves, for once. † Look up what happened in the cattle industry under Reagan, while you're at it, in case you don't know.
† The author has an eidetic memory--he was that young--of the first time he scrounged a nickel for the candy machine at the local swim club, obtained his preferred (already odd/snobby at such a young age) Polar bar, which was a knock-off Milky Way with a white glazed top, I think, the icing signifying the cool crispness of the Arctic, tearing off the wrapper, and discovering that the shape of the candy bar was now being played by a black cardboard insert, notable for its previous absence, and the bar itself had withered by 10%.
Labels: You Kids Get Off My Lawn
Email ThisBlogThis!Share to TwitterShare to FacebookShare to Pinterest

Yet another of Tricky Dick's lingering dirty tricks (like Dick Cheney): I would date this ridiculous accommodation of ignorance, stupidity, and outright lying by anyone on the right/from the Republican Party to the NYTimes' hiring of William Safire in 1973 as a sop to the White House after they went ahead and published the Pentagon Papers and the Nixon Administration wanted to go medieval on their asses. I mean, how did 5 years in PR, followed by work for Nixon, then Agnew, beginnning in 1960, qualify him as a columnist for the NYT?

Granted, he could use bigger words than anyone of the pinheads currently spewing wingnut nonsense ("pussilanimous pussyfooters", "nattering nabobs"), but his primary qualification was apparently that he was a hack for Nixon. From that point on, the only qualification necessary for being a right-wing pundit was being right-wing, so far as I can tell.

So, apparently, idiots and enablers like Weisberg and Sullivan slept through the last four decades; it's more than a little late to try to act surprised.

Doghouse, you know I love ya, but Weisberg has a point. It's Obama who has given up on trying to explain complicated matters to the American people. He persisted in taking the "I Expect Congress To Put Aside Partisan Politics And Do Its Job" approach, when all that did was encourage the average, Low Information Voter(tm) to believe that both sides were equally to blame. Obama (and the Dems) needed to be out educating the public as to WHICH Pug policies were wrong, and WHY they were destructive, and hitting it day after day until the media was forced to cover it. The 'baggers deserve their due... their beliefs and policies are drastically wrong and catastrophically destructive, but they push them with such relentless certainty that, unless you really pay attention to this stuff, you might start to think that they have a point. Similarly, even though the Dem policies are orders of magnitude more sane, the fact that they are willing to compromise them away might lead these same morons...er...low information voters... to think "well, if the Dems don't believe in their own policies, why should I? And why should the media cover them?" Obama, as Randi Rhodes and some others have suggested, may be playing eleven dimensional Alinsky chess, but in politics, excessive subtlety can be self defeating.

What it is like, is like everybody agreed to treat these people as though they were not seriously disturbed, and disturbing, in exchange for fewer angry phone calls, now emails.

You can get fired for opposing something idiotic like the war on Iraq. But you can lie your ass off in the NYT and the WaPo (e.g. George F. Will and global warming) and there is nothing to fear.

As long as your lying for our plutocrats, your high-paying job in journamalism is safe.
~

Okay, so there is reason to take Rick Perry seriously as a candidate, because, c'mon, lookit who's actually been President the last few decades.

Take the weakest of the lot before Rove's creation -- Ford, Muskie, Mondale, Spiro Agnew fer crine out loud -- and they were all at the very least serious candidates because they were more than a teevee caricature of a politician, or a cartoon version of a thinking human being for that matter. Reagan may have made us take idiocy more seriously, but I suspect that the only reason Poppy picked Quayle as his VP was to really prepare the way for George W., to undermine the soft bigotry of our low expectations so to speak. So, like the Yale status of their prototype, Sarah Palin, Rick Perry et al are all legacy candidates.

The ZERO bar! Very popular at the muni swimming pool in Indio, CA, back in the 60's. Like eating a candy bar with white frosting would cool One down.

I never understood why we had to run thru those showers between the locker-room & the pool, though.

The System knew that people wanted something to celebrate, so in 1984 it was provided to us. (Having Walter Mondale as the Dem nominee didn't exactly help.) I can't shake the idea that we practically colluded with the System, because we just wanted to feel good about something--and the System was only to happy to take advantage of that.