JON, Jon Jon: whatever's wrong about that Newsweek Bachmann cover--and, somehow, no one to my knowledge has mentioned "being the sort of country where a religiously mazed Bible saleswoman rates any sort of national news coverage"--it's not an example of Librul Media bias which makes FOX look good. Liberal Media? It's fucking Tina Brown. It's marketing. It's the reduction of everything to celebrity gossip as perpetrated by the Roone Arledge of Literacy. And the goddam thing about that is, "There's no such thing as bad publicity" is as old as the Ten Commandments. We all know better. Bachmann willingly poses for pictures like this 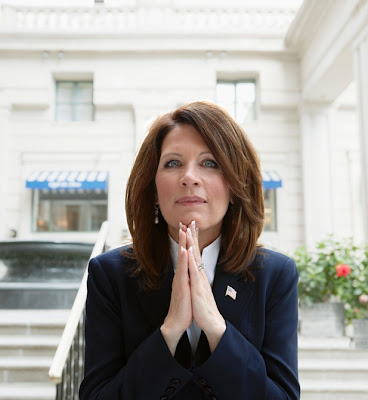 and I don't hear anyone complaining about the outrage to Christianity that is the public display of piety for private gain.

And that goes for Terry O'Neill, too, who said:


First, the Steinem Test belongs with the Above the Ears, Above the Collar test for boy's hairdos of my high school days. Second, it more closely resembles the MMPI than a real test, since a close examination of any results tell you at least as much about the test operator as anything else. The fact that someone is required, by commercial considerations alone, to proclaim Michele Bachmann "a serious contender for president" tells you all you need to know. And more.

This is pretty straightforward, isn't it? The reason there's a Michele Bachmann Crazy meme out there is that she's a fucking loon; as Stewart said, Newsweek could have made that point using her words (by why should they blaze a trail?). The reason there's a Michele Bachmann Crazy Eyes meme is her off-kilter affect--that's not even a matter of interpretation, just one of cultural norms--which dovetails nicely with Meme #1. Tough fucking shit. The reason Tina Brown decided to take advantage of that, assuming she did, was the eternal quest for a buck. Take it up with the people who think that's a sacred oath excusing all sorts of tasteless, amoral behavior. Not with the few Liberals still working in journalism.

Tough fucking shit. We heard this crap about Sarah Palin. We heard it about George W. Bush, more to the point, and look where that got us. Nobody said it was unethical to make fun of John Kerry, or Al Gore, or Mike Dukakis. It's just well past time for forty-something male commenters to acknowledge that this is no one-sided game, that this sort of thing is the Right's great stock in trade--the bumper-sticker witticism, the Messiah caricature--and demanding unilateral disarmament from the Left, let alone from "The Left", is ridiculous.

This is what was said about George Fucking Bush, and that oughta end it right there. You can't make fun of him, you're showing an elitist distain for Christianity, an Easterner's bigotry against (imaginary) Texans, a literate snob's condescension for Yale graduates who can't speak English. Especially not if you're Newsweek, or Time, or NBC, or anything else covered by the right-wing rubric Librul Media, because you're not allowed to call bullshit on that, either, apparently. Just on John Kerry windsurfing. Or Dennis Kucinich, on general principles.

Demands for faux-civility are no different than the argument for faux-balance. It's false, it's contrived, and it plays into the hands of the worst sort of lowest-common-denominator abuse of the system. Bachmann isn't exactly suffering personally from a refusal to caricature her opponents. She hasn't been forced to withdraw from the race for being too honest, and too fair, and too civil. There was no shortage of professional audience applause when she managed to string two certifiable English sentences together in the last debate. Fer chrissakes, I'd like to think the Crazy Meme would stand on the evidence alone, too, but take a look around: Honesty's dead, and Truth's on suicide watch.

Listen, Jon Stewart could've filled an entire half-hour riffing on that cover if he wanted to, but linking it to "proving the Right's case about the Unfair Librul Media" is just flummery. The pool water is fetid, drain the pool; don't complain about how unfair it is when someone who's swimming there voluntarily gets dunked by some commercial rapscallion.

And while we're at it, maybe we could fumigate a political system which allows a hole in the atmosphere like Bachmann to become "a serious national candidate" by dint of nothing more substantive than that Newsweek cover is.

Meanwhile, you'll forgive me if last night's GOP debate didn't cause me to learn where FOX is located on my teevee. It's really enough, for me, to watch the phony buildup to a phony "debate", and wait for the inevitable recap based on the buildup. Oh, it's gonna be Pawlenty vs. Bachmann! They're gonna take the gloves off. They'll violate the 11th Commandment!

Nobody asks why anyone should care what Pawlenty was saying just before he hit that brick wall, or why Bachmann should be replying to him at all, the same way no one asks why this collection of stale iced sugar cookies deserves any coverage at all, let alone any that might contribute to one of 'em becoming President. I don't know why NOW isn't jumping T-Paw for daring to suggest that Bachmann isn't a serious contender for President; Bachmann's response, which appears to involve having her staff find ways of calling him a godless Socialist which can be used on a Republican, is pretty much the nominal operating program. Has anyone said anything of substance yet in these things? Would anyone notice if they did? Hey, isn't that Rick Perry?

That anyone would accuse a Tina Brown edited publication of being liberal is out of his fucking tree. I remember after she took over the New Yorker, the fan-drool over big businessmen became increasingly rampant under her tenure.

I'm past the point of saying to myself "Jon may be funny, but He Is Not My Friend".

When you combine this incident (the Newsweek Cover) with the Tully article about angry Carmel seniors interrogating Dan Burton, I have come to a conclusion and it's not good. People now believe whatever they want to believe and should just admit, "Don't confuse me with the facts!"

I didn't watch the FAUX Nooze debate either. I did enjoy the live blog, however.
~

Yeah, that damn liberal media. They would NEVER portray a male and/or Democratic candidate in an unflattering light on their cover with a caption indicating something negative about said candidate's personal qualities.

Boys and girls, we are very near the end of civilization.

The Stupid is killing this country. All resistance is futile, apparently, though I hope Krugman doesn't get the word.

I didn't see much "sexism" in the Bachmann photo. She IS crazy, and she usually looks crazy. Its not like they showed cleavage or nipples.

They did a nasty photograph of whatsername... Ann Coulter. Don't know if it was sexist, but it was mean.

Democrats should exploit the Michele Bachmann / Dolores Umbridge simile as often as possible.

Ya beat mne to it, JD. First thing that popped into my mind.