Wednesday Olio: It's A Cookbook! Edition 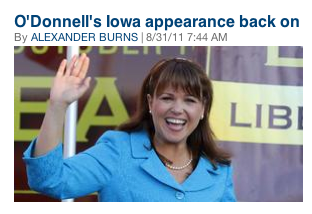 • Okay, so my first thought was "This is news for whom, now? The five people who showed up at O'Donnell's book signing?" Then I realized that that might double Politico's readership without appreciably lowering its average IQ. Good move. 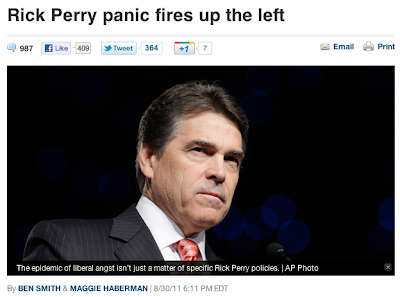 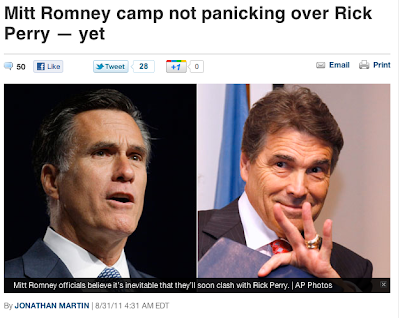 • And my first thought here was "Oh, Politico's management gave every employee the same Word-a-Day calendar last Christmas." But that doesn't work, since "panic" in the first instance consists of spokessentients for four "leftist" "special interests" (Women, Gun Violence, the Separation of Church and State, Al Sharpton) stating their dislike for the Governor's politics in what seem like fairly calm, and certainly complete, sentences (and apparently in response to a question some journalist asked); "not panic", in the second, describes being forced to kiss Jim DeMint's ass in public, and having your advisers, real and self-declared, urge you to start swinging at Perry real quick, before the Teabag Party appoints him President.

But even as the primary is fought on conservative turf, liberal leaders say they and their constituents see Perry as far worse than your average, hated Republican, and indeed as bad — if not worse — than his hated predecessor in Austin, George W. Bush.


Y'know, the median age in the United States is around 35, and the median age of voters adds another decade. This suggests that the typical "liberal" "leader" should have a passing familiarity with Richard Nixon and Ronald Reagan, and probably should have confronted the presidencies of one or more Bushes from a liberal perspective. Th' fuck is there left to panic about? Why would anyone in his right mind imagine that a Romney presidency would be "more moderate" on gun control just because Rick Perry is a pandering loon in a bandolier? What gun control? We fucked this country up royally in 1980. It is the year to which you can trace the decline of the middle class, the ascension of Property over Personal rights, the end of Fairness on the public airwaves, and the national agenda being set by slimy televangelists. The two centrist Democrat administrations in the interim have sought mainly to find a common ground between Reaganism and their own pollsters' notion of what wins elections; historical Democratic majorities in both Houses did nothing whatsoever for their supposed constituencies. I sure don't relish the idea of another Bush, but does that make me feel more confident about Mitt Fucking Romney? No it does not. I'll relax about it when this shit is thoroughly discredited, in the public debate and at the ballot box, the same as it has been in reality. Or else when the tainted Chinese catfood kills me. I'll panic about it never. The people who ought to panic about Rick Perry are the Mitch Danielses and the David Brookses and all the other fuckers who've been whistling past that graveyard for thirty years now.

Maybe Rick Perry is 8% worse than Romney, and 15% worse than Obama; if I had a serious alternative I'd be donating money to the cause. When we fuck up Social Security, Medicare, reproductive rights, the public schools--that is, when we fuck them up to Republican standards, not just Democratic Bargaining Position standards--and arm every citizen so we can gun down anyone who doesn't Pray in school, I'm not going to panic. I'm going to watch, and try to enjoy, as much as possible, as the slow dawning of what they've accomplished seeps over the Republican rank and file, aka the rightward part of the new permanent Serf class. We've had thirty years to wake up from this shit now. The continued slumber is not due to lack of evidence.

• Meanwhile, I hope you weren't too overcome by Perry Panic to enjoy the tour of The Opulent Digs of Aisha Gaddafi, the Uday and Qusay of Libya, as brought to you by teevee reporters outraged by the pretentiousness of Wealth and the stratification of someone else's society.

Labels: Things I Say Just To Keep Myself From Screaming
Email ThisBlogThis!Share to TwitterShare to FacebookShare to Pinterest

Meanwhile, I hope you weren't too overcome by Perry Panic to enjoy the tour of The Opulent Digs of Aisha Gaddafi, the Uday and Qusay of Libya, as brought to you by teevee reporters outraged by the pretentiousness of Wealth and the stratification of someone else's society.

Yes! I bet he even had red silk pajamas.
~

Pearl of the Prairie said...

"I'm going to watch, and try to enjoy, as much as possible, as the slow dawning of what they've accomplished seeps over the Republican rank and file, aka the rightward part of the new permanent Serf class. We've had thirty years to wake up from this shit now. The continued slumber is not due to lack of evidence."

I want to enjoy it as well, but I'm afeered the slumber is a coma no kiss can wake them from. If they do come to, it will be because of Obamacare. Or something.

There is not enough Shiner Bock on this planet to make me sit through that political punditry version of ZOOM!

Always the glass half empty. Don't know about the other people, but this Benen's just Doghouse Riley with a bowtie and pride in his IQ test results. Klein is Doghouse Riley less 25 years or so of experience but with rhino wok skills and an innocent desire to learn the best way to make a "dirty martini." We're all on the same side, yo.

Mmmmmm. Can I have some of the sirloin flavored shit?

The world is depressing as folks with sand in their ears cannot feel the grit because they've softened the feel of the sand by sticking their heads into the midst of unfinished stools. Even so, your writing here helps the medicine go down with decent beer and clear eyes. Eventually the bubble will burst. Maybe it has already. Alas, folks are more likely to find a scapegoat who had little or nothing to contribute, or was the last sensible person working against the disaster, than to see how they are sitting in the outhouse hole they themselves dug and filled.

Stop rolling down hill like a snowball headed for hell. --the Hag, early in the Reagan era