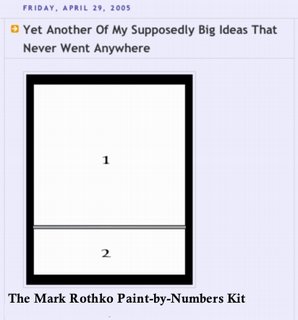 To my last funny idea.

An Yves Klein Paint-by-Numbers Kit would be even better.

Hey, I thought it was funny, and I've gotten plenty of yuks from your oevre since.

I sent that to my best friend for her birthday. Which, it occurs to me, is tomorrow. Oops.
It's *such* a good thing she's not my partner.

Well, that's taken care of, anyway. I went to GiantMicrobes and got her a couple viruses, a bacteria, and a bug.
Thank you for the reminder, Riley. I owe you.

Even though you say it was your last funny idea, it made me laugh.

This post is demonstrative of why I think you're one of the best, most insightful and occasionally hilariously funny bloggers I read.

You've had many a funny idea, whimsical notion, and spasm of insight, Mr. Riley, but I must sadly report that you were scooped on this one by Joel and the bots. They introduced the Mark Rothko Paint-by-Numbers kit in episode 419, The Rebel Set, which first aired during the 1992/93 season.

Maybe you could do something with Harry Whittington's (post-shooting) face and Jackson Pollack?