Indiana: The Third-Best State To Be a Snarky Blogger From, and Rising!™ 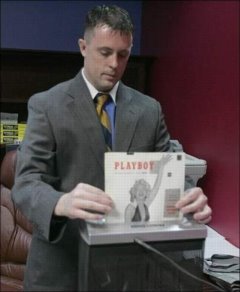 • That would be South Bend (IN) Dog-Bite Attorney (caution: crazy law-talkin' guy's site), recent Wonkette honoree, and Indiana Second District Congressional candidate (Republican) Tony Zirkle above shredding a copy of the first issue of Playboy, which he found on the internets for a mere $1200. From the Zirkle for Congress (caution: crazy candidate's site) page on his website:

Bin-Laden may be foreign enemy number one, but there is a domestic enemy that has invaded the most intimate areas of our lives, destroyed families, abused children and animals, and by alienating men and women from each other, has tripled the homosexual population in just the last decade. History and economics both demand that this industrial complex be ended immediately.

Tony's running against the 2nd District Republican incumbent, Chris (Count) Chocola. It's part of a growing trend in Indiana politics, rabid nutballs challenging their own party's seated members; it's also happening to the President Pro-tem of the Senate, and last time around they actually unseated a couple of state legislators.

• Governor-in-Chief Mitch "It's the Pictures that Got Small" Daniels plans to head out to other American cities on what he's dubbed his "Hoosier Comeback Tour". No, it's not his comeback from Bush-level approval ratings, a prospect so remote as to make the waste of gas unattractive even to a Republican, but to--no, really--urge expatriate Hoosiers with college degrees to move back to the state. On close trips, Chicago, say, Mitch will take the crowd-pleasing Mitchmobile RV-One, but he plans to jet to more distant locales, once we lure back someone smart enough to fly a plane. Take it away, Indianapolis Star:

Daniels is sketchy on when he'll begin this expedition or what kind of events he'll hold. "Maybe invite folks to a lunch or a dinner or something," he said.


Depending on his itinerary, this should bring the number of American cities Mitch has spent the night in since becoming governor to over a dozen. Oddly, none of those is Indianapolis.*

As of this AM there's been no response to my emailed suggestion of fittin' that baby up with a couple commercial deep-fryers and a freezer full of White Castles, which would solve the problem of actually locating any former Hoosiers, who probably don't want to be identified in public. Just park the thing somewhere and start fryin' up some Elephant Ears. There'll be a crowd before you can reach for the powdered sugar. And while leaving the state will probably be the most popular thing the beleaguered munchkin has done, a lot of the state's political insiders have questioned the wisdom of courting the Book Larnin' vote. Dick Lugar's a Rhodes Scholar, fer chrissakes, and you rarely hear him use words of more than two syllables.

* Good news for Northsiders: the Guv and his missus actually plan to move into the Governor's mansion in late summer. I'm still offering twenty bucks for a picture of Cheri Daniels walking the dog in that neighborhood, without State Police guard, after dusk.

• Apparently caught up in Indiana Toll Road fever, the City of Chicago is offering to sell the naming rights to the Chicago Skyway, the toll bridge to Indiana whose operating rights were sold last year.

It's something we're all too familiar with here. The Colosseum at the State Fairgrounds has been the Pepsi Colosseum for more than a decade, the Hoosier Dome (we had a contest to name that thing originally, and Hoosier Dome won!) was renamed the RCA dome about the same time RCA basically pulled out of the state, and our new, as-yet-to-reach-the-midway-point-in-cost-overruns football palace multi-use stadium the Republican legislature just had to yank out of the hands of Indianapolis' Democratic mayor will be known as Lucas Oil Stadium. We didn't even get a contest this time. Plus all the money for the naming rights go to the Colts, who otherwise would have had to cough up a token fee for their new digs.

The overruns began about the time the ink dried on the deal now shepherded by a Republican-led commission, when they found they'd managed to overlook the money they were required to pay the Colts for their trouble in leaving the old stadium. That wiped out the rainy-day fund, which might have come in handy for the escalating steel prices and the removal of tons of contaminated soil. Then there's the saga of the M.K. Hurst Co*, which owns a factory and 2.7 acres of property on the corner of what was to be the parking lot. The wise men of the commission decided to play hardball, and sued the Hursts last year even before negotiations had ended. Unexpectedly this sort of pissed off the Hursts, who fought back and will now get to keep their building while swapping the 2.7 acres for one acre owned by the state. As part of the deal the state will buy lunch for the Hurst family. For the next two million years.

And because of the lost parking we're looking at building a $15 million parking garage somewhere. Or talking someone else into doing it, as one of the wise men wisely suggested.

But back to the naming thing, I don't understand why the public, which is footing the bill, of course, doesn't just refuse to use the "new" name. I still insist on calling it the Hoosier Dome. 'Course I also call it the "Exxon-Mobil presents the Pepsi Colosseum, brought to you by Viagra", but that's just my little joke. I'm pretty sure Chicagoans will still be calling it the Skyway no matter who shells out $3 M a year to plaster logos everywhere, but that's life in the real big city.

May I immediately suggest that when your guv'nor goes on the Mitch Itch or whatever he'll call it, you simple lock the door behind him? Sure, thank me later. And it may be of comfort to note the after bastardizing the name of Comiskey Park (named after a right bastard, incidentally) the denizens of Chicago began to refer to US Cellular Field as The Cell. Hey, that's cooler in a goofy way then being a corporate whore and not even getting free makeup. Mayhaps you folks will make your own fun with landmarks also.

Mmm. White Castles. The worst thing about moving away from Chicago was the dearth of 'Belly Bomber' places out here on the Left Coast. And the ones in the Safeway freezer case SUCK.

I'll put a tenner down on the Skyway being renamed the "Daley Doonboggle." I'm sure In-The-Grave-Richard would approve... if he's not pulling the strings from there already.

And, yeah, I'm still calling it "Mariners' Field". If Safeco wants me to use their name for the damned thing, they can send *me* a check for ten thousand bucks. As long as I'm still paying taxes on it, I'll call it what I want and harrass the local news teams to do so also.

i don't know dude, someplaces are just best to be from.

well, doghouse, i've said it before and i'll say it again ...