You're Soaking In It 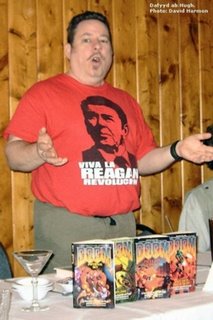 And even should you decide to return the books and cancel your membership, you keep the "Reagan Revolucion" tee, and the food-service-quality martini glass, as our free gift!
How bad is our public discourse? Well, lemme tell ya. The other day when Mark Kleiman exposed, and mauled with a seemingly effortless swipe, the Red Blogostan fantasy that there are no secret CIA prisons in Eastern Europe, it was just a story Porter Goss planted to catch a Democratic mole, I admit to a minor shrugging of the shoulders at most. And it might have been just one shoulder. Yes, these were the very same people who just weeks before had decried the damage the leak had done in wartime, and yes, it's the very same people who professed indifference at most to the story and the Bush administration legal opinions that justify it. And yes, it seems like it keeping the tale of dire consequences alive would be of greater value than sacrificing it to some game of Blogospheric Telephone that created a fantasy of deniability at best. But such is our public discourse that I didn't even shrug while typing it up. I didn't even shr.

Meanwhile, several real blogs, ones that write about serious issues, if not always in utmost seriousness then at least without referring to their cats or the size of their prostates every other paragraph, noticed the difference of opinion I had with military historian Dafydd ab Hugh, and even dug up the picture of him above. This encouraged me (maybe shamed is the better word) to check back in at Big Creepy Toads or whatever that website of his is called, instead of the article about re-gapping the sparkplug on my lawnmower I had planned (it'll keep!). And sure enough, that Mole Trap game of Telephone had reached his home galaxy. In a 1600-word thought experiment that name-checks Blade Runner, Mission Impossible. (teevee version), and Patriot Games, not to mention his own debugging efforts, we get this:

Certainly, I have never heard any CIA agent claim actually to have been inside one of these secret prisons; nor have any guards been produced, nor administrators, secretaries, or even janitors. No buildings have been found, and you'd think a building as big and solid as a prison wouldn't be moved around very often.

[Emphasis in original.] Shrug. But then it occurs to me that I have never seen a photograph of Davydd ab Hugh and Steven den Beste together, and the CIA has never denied they're the same person. It may just be a coincidence, but it bears looking in to.

Once in a while, after I've actually looked into some piece of idiocy or other, someone will ask how I can stomach reading the stuff, or warning that I ought to lie in the shade with a cool cloth on my brow for a bit. That's probably a valid concern for the people who do a lot of such stuff (and you know who they are), but I'm not one of 'em. I've found I'm able to read Brooks about once a week, and recently Noonan, and I can plunge right through one of Jonah's think pieces like I'd dive into a pool of Jell-O to save a drowning Shirley Manson, but opening The Corner gives me a shudder, and Powerline is almost out of the question. I tried risking the former earlier this evening, which netted me this:

So Newsweek is reporting that Mary McCarthy denies being the leaker. This despite stories in the press saying that she failed a polygraph and admitted to it. McCarthy's not the the one who told Newsweek. Do you know who did? Her "close friend" Rand Beers. Who's Rand Beers? The National Security Council staffer who quit in 2003 and went to work as John Kerry's senior national security campaign adviser. You know who else is Rand Beers's old friend from the National Security Council staff? Joseph C. Wilson IV. Just saying.

Wow, McCarthy reportedly denies being the leaker, despite stories in the press to the contrary. Now there's a conundrum unique in the annals of American journalism. And this:

Good email from a reader:

just a couple of (obvious) comments..libby and/or rove may indeed be
'guilty' of cia-related 'leaks' - but the one thing we can say with complete
confidence is that a special prosecutor empowered to investigate such a leak
has not indicted ANYONE for 'leaking'...perjury; yes - release of classified
information, no...so there is no 'legitimate' - pun intended - comparison...

Secondly, as an ex-washpost reporter, I feel obligated to point out that the
post made an institutional judgment - not a dana priest judgment - about
what it would publish about the 'european renditions/prisons'....dana had
done a story on the planes allegedly carrying suspects/terrorists - replete
with airplane ID numbers - and the post had been covering this aspect of the
'beat' for quite some time...
...if this mccarthy person was, indeed, dana's source and she got caught, we
need to return to the core issue of not merely whether this is a 'good' or a
'bad' leak - truly one of the most stupidly framed dichotomies one can
imagine - but whether the release of this information could put innocent
lives at risk...

...this question is as fair to ask of the plame circumstances as it is for
the 'prisons' - it can now, with benefit of hindsight, be said that we know
of no individual harm that came of the plame 'leak'...she and her family
seem to be doing quite well, god bless 'em...but as for those individuals
who may or may not have been actively involved in aiding the US in
transferring individuals from one country to another...we have no
clue...however, it is now very easy to imagine scenarios under which the
release of this information has made it far more dangerous for individuals,
organizations and nation-states to choose to cooperate with the United
States in the exchange of either terrorists or terrorist information...
Their understandable reluctance to cooperate with the US - why should we if
you can't guarantee our secrecy or discretion in helping you? - means that
American individuals and organizations will likely be exposed to greater
risks of harm...

...bottom line: the mccarthy 'leak' is different in degree and in kind from
the plame 'leak'...we can talk about the ny times/nsa leak at another time
:-)

So a) no one's been indicted for leaking in the Plame case, which makes it different from the McCarthy case where no one's been indicted for anything; b) we know that no individual harm came to anyone from the Plame leak, because the Wilsons are doing quite well (with the benefit of hindsight we now know, apparently, that Valerie Plame had no contact with anyone while she was under cover), but we don't know whether anyone connected with the secret prisons has been harmed, because other nation-states might refuse to cooperate with the US, which would likely expose Americans to a greater risk, Q.E.D.; and c) the washpost stylebook on capitalization is one of a kind. I'm not sure whether any of this is qualitatively different from the Mole Trap theory, but any further observations will have to wait until I lie down with that cool cloth for a while.
Email ThisBlogThis!Share to TwitterShare to FacebookShare to Pinterest

So it may just be that I'm tired, but I can't figure out what the intended pun was supposed to be. Anyone feel like helping me out on this?

It's probably not worth it, but I'm just trying to figure out what constitutes humor with this group.

As all anonymous emailers at the Corner do, ex-washpost repo really nails, it. As an ex-WSJ editorial page writer* I, can only reiterate what he or she 'said'. Take a good leak like the President's or take a bad leak like McCarthy's, the important thing is that when one finds oneself in the leak department that right, or wrong, a quantifiable leak is indeed, taken.

As to this 'discourse' you speak of, the objective of Mr. Daffy-D and ilk is not merely to lower it, but to vaporize the hell out of it.

*I would still be at the WSJ, if, not for a fatal disagreement on the use, of commas.

I have a headache now.

Re the fat bowl of f*ck in the photo - ab Hugh, I mean - his award winning story was pretty interesting. The title had to have come from an ancient entry in the Guiness Book of World Records for Most Difficult Tongue Twister. In some old Central or South American language - Mayan or Incan or Aztec or something - the phrase "the skunk rolled down and ruptured his larynx" was supposed to be inordinately difficult to pronounce. I believe glottal stops were involved.

That bit of trivia has been like a bit of food wedged between two molars for several years now. Thanks for providing the chance to use a bit of mental floss.