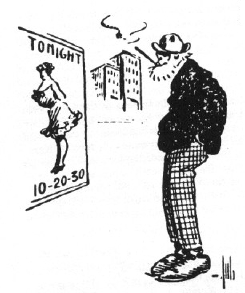 The Indianapolis News, the afternoon newspaper back when there were such things, and the home of Abe's creator Kin Hubbard, re-ran one every day on its back page when I was a lad. The paper generally hit the screen door about an hour after school let out, and Abe Martin was always the first thing I turned to. Which was a mite odd, since I usually didn't get it.

For one thing, I never could figure out just what I was looking at. That's an early Abe above; Hubbard later stylized him so that the whiskers--you didn't see many of them in the early 60s--looked more like the stuffing was leaking out of a scarecrow. And the humor wasn't always humorous, not to the 9-year-old mind. I don't know how many years of five-a-weeks went by while I earnestly sought some connection between drawing and the caption, as in every other cartoon on the planet, but there never was one. For some reason I stuck with it, and at some point--I don't remember quite when--I became a huge fan. Hubbard moved Abe from Indianapolis to Brown County a couple months after his debut, and he's still a fixture in the half tourist-trap/half artist colony of Nashville, and the inn at Brown County state park is named for him.

I owe him my love of metaplasmus, in particular my mildish apocope addiction (and how cheering it is that my present spellchecker doesn't recognize either!), but particularly for making me understand that what seemed a hundred years old when I was reading it forty years ago was nevertheless smart and funny and modern.

Nobuddy ever forgets where he buried a hatchet.

Next t' a circus ther hain't nothin' that packs up an' tears out any quicker'n th' Christmas spirit.

Anybuddy that ever tried t' git rid of a chew o' terbacker at an art exhibit kin appreciate how terrifyin' it must be t' try t' stash a torso.

A friend is like a umbreller. He's never there when you want him, an' if he is he's broke.