This Is What You Do For A Living? 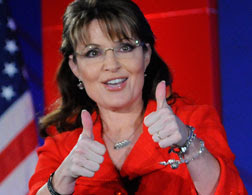 WHATEVER might be interesting about Sarah Palin--and, God rest you merry, gentlemen, it's not how mannish features, a selection of Anita Bryant's old hairdos, and a voice like an agitated raccoon came to be regarded as "sexy"--it's apparently off-limits to the typists of the Press, where her almost preternatural outstripping of George W. Bush in the Totally Unprepared, Utterly Clueless, Obviously Disinterested, and Finally, At Bottom, Just Plain Batshit Crazy Utterance sweepstakes is simply discounted. "Palin? Oh, yeah, completely out of her depth, assuming she has any. Untrainable, venal, empty, even, unless you want to want to count the ability to find someone who could help her cash in personally on her child's Down syndrome, cammo fetishism, and the same Jab It In Your Eye, Pointy-Headed Elitist Libruls demographic that gave us the roaring successes of Richard Nixon, Ronald Reagan, and George W. Bush. Not that those people aren't all over any Republican who can attract six votes like flies on roadkill. But what a story!" Assuming, that is, that you gloss over the major parts.

Sure, sure, this is Slate, where the Amazing, No-Hands, Reverse Double-Counterintuitive Special Twist Contrarian story assignments utilize some form of wingnut/libertoonian magnetic poetry--Why is Driving an SUV healthier than Barack Obama?--but, c'mon, Palin is the Right's Al Gore? Because they're politicians and celebrities? Jesus, I know things are tough in the Journalism biz, but would it kill you to skip a meal now an' then, and an assignment?

Your reaction to this [Palin's unshreded Cal State dumpster contract] probably depends on your position on the political spectrum. If you are a liberal, you see it as proof that Palin is no "hockey mom" and that her humble persona was a fraud. If you are a conservative, you see it as proof that the free market has decreed that the Palin brand is more valuable than ever. (If you are fond of maxims, you are simply puzzled. Quitters never prosper, we're told, and yet Palin, who left her job with 17 months to go in her first term, has made $12 million since doing so, according to ABC News.)

Th' fuck? First, like I need any help determining that Palin's "persona" is fraudulent. Second, my reaction to the story totally depended on whether I was helping fund Cal State Stanislaus, which I ain't. Third, almost none of my reaction to Sarah Palin, which might be fairly described as "bemused indifference", derives from my position on the political spectrum. It derives from Sarah Palin, and her position as the spokesquitter for disastrous and discredited ideas, or "ideas". It derives from the cheapening of our public discourse generally, of which she is a recent eruption of skin rash I wish t' hell people like you would quit scratching. And, finally, regardless of the damage caused by decades of this facile "Conservatives think like this; liberals think like this" coverage, and the tin-eared crapola, like the above, it services, I have a strong suspicion that a helluva lot more "conservatives" wish the woman would disappear than will admit it to pollsters.

(By the way: maybe it's just because I'm a liberal, but I love how "trashed her sacred bond with the voters" is somehow counterbalanced by "earned $13 million doing so", apparently on the grounds that any journalist in the country would beat grandma to death with an icing spatula for a similar opportunity. It's as if your husband's surgeon walked out in the middle of his quadruple bypass, and a hospital administration told you, "Before you get upset, you should know a tee time suddenly opened up at Pebble Beach".)

But if you step back and judge Palin by the standards of other celebrities and reality-show hosts, the contract seems pretty benign. She didn't demand white roses or call for a police escort. She doesn't ask that all televisions be tuned to Fox, like the man she wanted to succeed as vice president. She does ask that questions at her events be screened—which, given how thoroughly packaged presidential "town hall" performances are, should be considered a standard political request.

Look, one, why should I judge Sarah Palin as anything other than a stumping, out-of-work politician? Because she needs to be graded on a curve? Second, we have Western Civilization's most risible campaign structure, and "events" are "staged" for maximum coverage by the gentlemen of the Press, who desire to cover anything other than boring old issues. This is bad enough to be termed "completely unacceptable"; what's worse is having that same Press turn around and use the (artificial) values of these tawdry carnival attractions as the standard by which we should judge all public behavior. Either Palin is a politician or she's a reality-show moron; if the latter she should renounce politics and shack up with a series of hunky bartenders, stock-car racers, and rodeo clowns. I have no idea whether President Obama's campaign appearances screen questions or no. I do know that, unlike Palin, the man has actually answered questions put by hostile interviewers, and done so in semantically-valid, complete English sentences.

Still, it is by the celebrity, not the political standard, that Palin should be judged. She is a personality—influential, polarizing, and not likely to be president—who talks about political affairs. In other words, she's a lot like Al Gore.

Albert Arnold Gore, Jr. (b. March 31, 1948) is a five-time US Representative from Tennessee, twice elected US Senator, two-term Vice President of the United States, and winner of the Nobel Peace Prize, an Oscar, an Emmy, a Grammy, and the 2000 Presidential election. His record of public service and dedication to principle--far from ideological purity and vapid applause lines--dates to his twenties, and his current "celebrity" is the result of a life-long advocation of environmental issues. So, yeah, just another publicity hound. Palin in drag, pretty much.

Defining Palin as a political celebrity is not to say that she lacks connection or influence with the people she speaks for. But drinks before takeoff and high-thread-count sheets do not necessarily affect her relationship with her audience. Oprah Winfrey is very exacting and very wealthy and yet still has a vast following of regular people. She used her popularity to help Barack Obama. No one would think her request for bendable straws out of line. It might be galling to some that Palin makes so much money by talking so much about regular folk. But is she really any different from a musician who makes millions by singing about the working class?

If you want to think about how Republicans will govern in the real world or look at the GOP philosophy in practice, there are vibrant examples to examine in New Jersey, Mississippi, California, and Virginia. In these places, conservatives are struggling to put ideas into practice that require real trade-offs and bring real consequences. These places are a better starting point for a legitimate debate about conservative politics and policy.

Reader, just for fun, imagine yourself the harried English teacher of a typical junior high school. Give this piece of shit a letter grade. That, or imagine you're Bruce Springsteen, and Slate has just asked you to pen an article about how much John "Inside the Beltway" Dickerson has taught you about Real Americans.

Not that it dilutes your point any, but Al Gore doesn't have an Oscar sitting on his mantelpiece. The film he starred in, An Inconvenient Truth, did cop a statuette for Best Documentary Feature but that prize went to its director and executive producer, Davis Guggenheim.

Other than this nitpick--one helluva post. I keep waiting for Caribou Barbie's fifteen minutes to be over--or for someone to put me out of my misery...whichever comes first.

I seem to have avoided this Slate of which you speak, although in the back of my mind, crammed as it is, certainly abused to a degree and probably underutilized in so many ways, I've heard of it...

But seriously, someone paid to actually write drafted that shit into a story?

See? I'm stunned incoherent by that vomit of verbiage that passed for an actual story.

I looked at Slate today and it is the most unreadable piece of shit I don't regularly read. It is worse than inside baseball and it even has a piece on the shape of baseball players' butts and what that brings to the team. I hate it. I hate the smugness. It is the very thing that makes conservatives discuss "liberal elitism." But it isn't elite. It is self indulgent overrated crap. Crash Davis would think so, too.

Hey, you used "Sarah Palin" and "ideas" in the same sentence. Better put some ice on that sprain pronto, son.

Slate is continually outdoing itself in the field of publishing moronic "counterintuitive" crapola, but this may be the ne plus ultra of the genre. It's stunning.

Shorter: Palin has no talent of any kind. How anyone could equate her with people who DO have talent (Gore, Springsteen), is just idiotic. We hate her not only because she is a mean-spirited, psychotic sociopath, but also because she is cashing in on being stupid.

The cognitive dissonance between her getting rich and the lessons we were taught as children that working hard, getting good grades and being a good citizen would get you far is paralyzing.

Anyhoo, she's also too a terrible parent to her children, so all the money in the world will not erase the horrible karma this woman has. She is due for some horrible tragedies and heartbreak and she won't be able to buy her way out of it.

Is it just me, or doesn't that last paragraph you quoted seem tacked on?

And didn't we have 8 "wonderful" years of finding out how Republicans govern and seeing GOP philosophy in practice?

The California state government is a "vibrant example" of Republicans putting ideas into practice?

The state is going broke, and Arnold's answer is -- save money by closing the state parks . . .

Palin is Milo Minderbinder in drag.

aaaand- high on my personal list of things we need to do to get out of this death spiral our "culture" is in, is to differentiate between the proceeds of fraud and the rewards for actual, productive work. Whether it is the obscene payscale for running corporations and whole economies(in to the ground), or just fleecing the rubes in some more obvious way, "earn" is not the appropriate descriptor; in fact, "appropriate" (long A) will do, if "steal", "collar" or "kype" are too frank or dated.

trans roma : Thanks for Discussing this wonderful post.I like Looking for companions Where the females where wonderful in all types and sizes to satisfy every possible company desire, and where these females where motivated and organised in high respect for their permissive opinions.