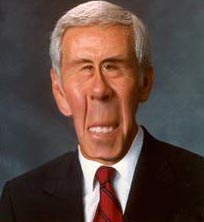 Lugar in minority on vote against troop surge
Despite misgivings about Iraq strategy, Hoosier thinks congressional opposition could be harmful to U.S.

WASHINGTON -- Despite his lack of confidence in President Bush's Iraq strategy, Sen. Richard Lugar voted Wednesday against a nonbinding resolution condemning the decision to increase U.S. troop levels. And he might lead GOP opposition to the Democrats' measure when it moves to the Senate floor next week. "It is unclear to me how passing a nonbinding resolution that the president has already said he will ignore will contribute to any improvement or modification in our Iraq policy," Lugar, R-Ind., said Wednesday. His comments came before the Senate Foreign Relations Committee voted 12-9 to approve the resolution saying that sending 21,500 additional troops to Iraq is "not in the national interest...."


...Lugar said having Congress go on record opposing the president's plan could do more harm than good. It could make the administration even less inclined than it has been to consult with Congress on Iraq, and "it will confirm to our friends and allies that we are divided and in disarray."

That would be the same Dick Lugar who voiced his misgivings about the Iraq war just before voting for the Iraq War Resolution.

And then when it had unmistakably turned to shit said, "I warned you about it."

How, exactly, does someone once known as "Nixon's Favorite Mayor" still have a political career?

Some major political party should think about running somebody against him. C'mon, it's only 5.7 short years until the next election.

Why does he still have a job?

Simple: he knows where the key to the love-handcuffs is located.

Maybe because we haven't sent him 374,000 applications for work at Thom McCann?