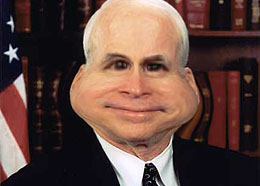 Yesterday afternoon my Poor Wife was off checking out the weekend student show she'd mounted in a frenzy on Friday and Saturday due to someone's screwing up the paperwork, so I tuned in a few minutes late to Face the Nation. And who is facing the nation in question but one John Sidney McCain III, (M-AZ). It's good to see the nets finally getting around to giving the man airtime.

The political history of John McCain is to me akin to the rousing popularity of some teevee preacher or surgically and sonically enhanced bimbo popstar: you know you'll have to endure more contact with them than you'd ever choose were it left up to you, and you know their influence will exceed any limits common sense could apply, but mostly you will wonder when the easily satisfied throngs will begin to see the conniving little weasel for what he is. Those people who haven't figured out that he's wasting a lot of perfectly good oxygen sure weren't going to be informed of this by Bob Schieffer, who seemed to think he was hosting a Rainbow Party. Now, one of my New Year's resolutions (okay, I really don't have any) was to avoid sounding like those Outrage of the Last Few Minute types as much as possible, but Schieffer operated as an utterly shameless flack, period. Here's a warmup pitch:

The Democrats, some of them, are derisively calling [the surge] the McCain Doctrine. Does that bother you in any way?

And speaking of All Outrage All The Time he introduced one I'd missed:

The debate up on the Hill has been not only really fierce, it's sometimes gotten very personal. There was one episode that got a lot of attention last week....Senator Barbara Boxer talking to the Secretary of State:

Now, before we roll tape--I think it's important we quote Boxer precisely here--was anyone you know anywhere where this got a lot of play last week? I hadn't heard anything about it, but then I have something I like to think of as a life, and it looks for all the world to me like Bob Schieffer is the Last Journalist On Earth still accepting Republican blast faxes. Here's the Boxer tape he played, followed by his response:

Did you understand her to say anything of the sort? Could you point to it? I was utterly flabbergasted at the time, and I'm flabbergasted by it now, and that's without mentioning that CBS came back from the video clip directly to a 1 shot of McCain sadly shaking his head. That would be the same Senator "Sensitive John" McCain who told the Why is Chelsea Clinton So Ugly? joke. I half expected Schieffer to give him a little hug and maybe dab at a tear or two.

About fifteen minutes later I was fiddling with videotape--ask your grandparents--and the VCR tuner happened to be set to MSNBC, where I caught of couple minutes of Carrie Lukas, director of policy for the Independent Women's Forum, which apppears, following the Holy Roman Empire, to be neither Independent, nor about Women, nor a Forum, and Ms Lukas' I-play-a-feminist-on-teevee hackles were raised over--you've jumped ahead, haven't you?--Barbara Boxer's insulting, anti-feminist suggestion that Condi Rice shouldn't have a voice in this country's war policy because she doesn't have children. So that cleared up where it was the episode got all that attention last week.

[I was still in news junkie mode, and my Poor Wife still wasn't home when This Week came on afterwards. A word about the respective guest lists momentarily, but later, doing panel, George F. Will noted that McCain's support among independents has dropped 15 points since September, about which Will, who must be taking political pointers from that Indiana governor he admires so much said:

You don't have to hold a brief for John McCain to say that this is what leadership looks like.

Right, holding a brief for completely brain-dead public utterances will do. For cryin' out...leadership? If the McCain Doctrine (ooh, that is satisfying) shows us what anything looks like it's naked political pandering from a man who backed the wrong horse in 2004 and now has no way out but desperation paid for in American blood. But noting that McCain's been paying for it already, without even being on the campaign trail, is remarkably like a delicious creamy nougat you weren't expecting.]

This Week interviewed Steven Hadley and John Murtha, which was an interesting distinction to CBS' McCain and Barack Obama (GQ-IL), as the former two are actually involved in the debate. McCain, whatever his value as poster boy for Endless Quagmire, is already on the losing end in the Senate, where a good half-dozen of his fellow Republicans are already in the lifeboats. As for Obama, while I'm willing to overlook his facile anti-Boomerisms (hey, dude, distaining problems is a lot easier than solving them) if he's going to go on with the Is He Or Isn't He Tour 2007 and turn up on teevee news programs somebody needs to tell him he's going to be asked about Iraq. He had a good one-liner about McCain being consistent--"he's consistently pursued the course we're on right now,"--but for someone who wants to score points off his opposition to the war from the Illinois Senate, empty platitudes and a refusal to come out solidly, and now, for defunding the war isn't going to get you through fifteen minutes with Bob Schieffer, let alone to the nomination. Especially not when John Murtha's on in the next half hour showing how it's done.
Email ThisBlogThis!Share to TwitterShare to FacebookShare to Pinterest

Yeah, all the usual suspects of the outrage machine pounced on the Boxer thing, but they're really stretching the whole out-of-context bullshit. Roy at alicublog linked to a typically odious Steyn column that joined the pissfest. As expected Steyn was even more dishonest about it:

"You can't begin to imagine how you celebrate any holiday or birthday," Boxer continued, accusingly.

For the benefit of anyone who hasn't read the whole thing, here's what Boxer said:

NPR has done a series of interviews with families who have lost kids. And the announcer said to one family in the Midwest, "What's changed in your life since your son's death?" The answer comes back, "Everything. You can't begin to imagine how even the little things change, how you go through the day, how you celebrate Christmas ...You can't begin to imagine how you celebrate any holiday or birthday.

I'll say it now that ANY democrat will win the presidency in 2008. Dennis Kucinich could beat McCain.

By 2008, Iraq will be so tightly wrapped around the necks of every single Republican candidate for every office that we'll see a sea-change sweep at every level. The religious right will stay home, and the business crowd will vote to toss out the crew that is about to wreck the economy by attacking Iran.

The one silver lining for me of BushCo is that it has revived my confidence in my own judgment. I knew these guys were lying snakes before Bush was elected, I knew it when the coward finally climbed the rubble in New York, and not ONE THING they've done has surprised me or caused me to doubt my common sense.

Now if only I could get the speaking fees of Tom Friedman, David Brooks, David Broder, Andrea Mitchell, Tim Russert, Chris Matthews, and every other loser who got it wrong.