If I Have Seen Farther Than Others, It Is Because I'm Standing On This Little Box Thingie 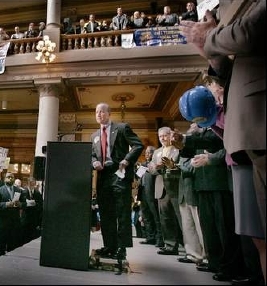 Here's a surprise (via Indianapolis Star):

Indiana's Bureau of Motor Vehicles has few safeguards in place to keep track of its finances and cash on hand, leaving the agency open to fraud, according to a state government audit released today.
The State Board of Accounts, which oversees the books of state and local government bodies, concluded the agency in recent years has failed to correct long-standing inadequacies in its record-keeping methods.
The board also found problems with a new BMV computer system installed last summer. The installation led to mass customer confusion and myriad problems with vehicle registration records. That system, known as STARS, "does not have an associated comprehensive accounting system, including the maintenance of a ledger balance," according to the report.
"As a result, bureau personnel cannot know at any given point in time what the balance of their receipts or cash on hand should be or to which fund it is due," the report said.
Former BMV Commissioner Joel Silverman resigned in September under pressure following the botched installation of STARS.

That would be Joel Silverman the former CFO of The Limited. The Joel Silverman who prior to becoming part of Governor Mitch "Lollypop Guild" Daniels' team of experienced entrepreneurs who were going to make "historic changes" in how state government was being run, had been the COO of Galyan's, the Indiana-based sports retailer which unfortunately sorta went out of business due to a competitor showing up. The Joel Silverman who brought 25 of his closest underlings along to work at BMV.

Hey, it's not like Indiana's BMV wasn't the worst in the nation before these guys took over--successive Democratic and Republican administrations had refused to end the patronage system. But at least every district whose vote was needed somewhere had its own branch, before Silverman decided to close half of them after the legislature adjourned as part of the big Let's Tell The Rubes We're Saving Them A Lot Of Money campaign. (The Rubes, to their credit, weren't buying.) At least in the old days when the cops pulled someone over they could run down the license plate.

(A personal note: I think ol' Joel was out the door by this time, but my own license renewal, which I'd been doing online since 2000, was sent to my Indianapolis address from 15 years ago, and finally arrived after spending six weeks somewhere in Northern Indiana. I never gave it much thought, since the computer program was so screwed up I couldn't imagine the cops would want the aggravation of pulling someone over for an expired tag.)

I haven't had time to get through all 35 pages of the auditor's report yet, but I think there must be an Easter egg on every page. So far I've learned that the bureau--touted in one of Mitch's "Official Governor's Pat on the Back to the Governor" reports as saving $2.3 million for renegotiating that same computer software deal--paid out an extra $2.3 million to the software firm with no agreement or authorization to be found. And the same operation which won a Mitchie (I think I'm making that up, but after six years of George W. Bush and two of Daniels, not counting his OMB stint, I can't really be sure) for saving $30,000 by cutting out free employee bottled water and making everyone bring his or her own toilet paper, was simultaneously losing $11.274 million by not charging consumers the credit-card transaction fees required by law.

Joel Silverman told the Indianapolis Star back in the heady days of April, 2005, when he was busy making history, that he had been frustrated by the 800 pages of laws and regulations governing the operation of the BMV. Which, he added, he hadn't read. Which, we add, he really needn't have bothered to add.

Listening to you discuss Mr. Soapbox (or whatever that thing is supposed to be to lift the wee one) and his antics makes me think Indiana must be running on some hybrid spiritual momentum thing that the good people of the state got going.

Gives me hope for the rest of what's become 'Murca.

Feel like bringing pillories for public servants back into vogue?