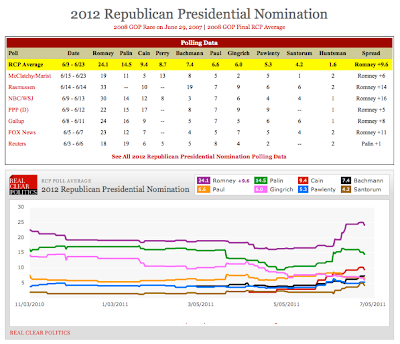 SO, basically: 1) there's as much of an actual excuse for all the Bachmann chatter (she's been featured on my local fucking news--which can't be bothered with the FSSA story, or the Toll Road bankruptcy, and which last night referred to the long-overdue ban on texting while driving as "controversial"--the last three nights running) as there would be for a brace of Ron Paul stories or Newt Gingrich arrest reports, and considerably less than in-depth examinations of Herman Cain, Your Next Ambassador to Pepperoni. 2) the obvious person to unite the "true" "conservative" base of the party is…the former Half Term Governor of Alaskaha, Sarah Louise Palin, who would then be shot down in a general election so devastating to Idiot America that it might take Paris, Snooki, and Cokie with it. And 3) Fred Thompson must be somewhere thinking to himself, "Dammit, I peaked too early."

And really now: if you are enough of a Sarah Palin die-hard fanboy that you, like another 14.5% of your fellow Republicans, believe that she should be your next President, who else here is really gonna measure up if she lets you down? It might look like 2/3 of the votes are up for grabs for a Romney challenger who breaks out of the pack, but how do you appeal to the disenfranchised Herman Cain voter, exactly? Oh, they'll support the nominee; Republicans supported Bush the First in '92 and Dole in '96, but there wasn't any fire about it. To the casual onlooker and scrupulous observer of the Law of Gravity all Crazy looks the same. But from the inside, on primary day, your Perry aficionado or Santorum intransigent is going to have to decide if he'd rather lose with Crazy-Eyes or Mr. Tiffany or Tundra Snooki than pull the Romney lever and have some sort of sporting chance. Sure, there's plenty of time for the herd to change direction; there's plenty of opportunity for a concerted effort to remove Mitt, derail the Pawlenty Express, or cockblock Sarah, if the situation calls for it. And, yes, whichever of these jokers gets the nomination will automatically collect 180 electoral votes just for being Republican. But for now, please, tell me how any of these guys has a chance.
Labels: Palin 2012
Email ThisBlogThis!Share to TwitterShare to FacebookShare to Pinterest

"the long-overdue ban on texting while driving"

Gov. "Genius" Perry just vetoed a similar bill here -- one that was passed by a fucking Republican legislature -- because it tells adults what to do, or something.

In 1912, all four Presidential candidates declared themselves Progressives: Socialist Debs, Bull Moose Roosevelt, Mr Republican himself (Taft), and the Democrat who won--Wilson all felt a need to secure the label progressive for himself. Contrast that with the present where the Republican potential nominees are racing one another towards the fringe, and part of this race is the effort to paint one another with a killer label: "progressive". If one is progressive, then one must be unpatriotic, elitist, socialist.

Man, Romney is about to get one spectacular shitload of Wall Street cash. It's a wonder he can talk for drooling.

I don't think the MOTU's care at all- Obama is just fine with them.

Palin does not run.

Perry does and sucks up all the non-Romney oxygen and it becomes a Romney-Perry race. The others will fade as their money dries up.

I think Perry, unless he self-destructs, would be a very potent opponent for Romney and a tough general election foe for Obama. I hope he does not prevail against Romney.

I figure we'll know for sure whether Perry's in or not sometime between now and his prayer meeting on Aug. 6. I'm not sure Palin will ever say for sure whether she's running or not. She may just let the clock run out. I have no idea what she's going to do with all the fire in her belly.

"fire in her belly"

May I suggest you meant, "PAC money in her bank account"?

Please, God-I-don't-beleive-in, make Bachmann the Republican nominee. Not for Pres. Obama's sake, for mine. I live for the 1st Obama/Bachmann debate. Biden/Palin was good for a few chuckles, & Obama/McCain provided Stewart and Colbert some good gags, but I'm looking forward to the Real Tea Party doing it's thing on national TeeVee when some actual un-decided voters might be clicking by during America's Most Talentless Mooks, or something, is on.
O, Michelle, why do I love thee? It's the eyes, I think. Empty, unblinking, seemingly without pupil or iris, as though chipped from obsidian. Surreal, but corporeal.
Plus, unlike the Snowbilly Grifter, she can take direction & stick to the fucking script. I wouldn't wish her handler's jobs on a broke-dick dog, of course, but for me her entertainment value is well-nigh infinite.
Having said that, please don't actually make her President. Yes, the canned goods & bomb shelter industry would see a nice boost in this nasty economy, but I think Glenn Beck has them covered already.

When the Republicans break the bank by refusing to increase the debt ceiling, they think that will be Obama's last gasp as President. Should they win this international game of chicken, the Depression of 1929-40 will look like child's play. The trick is whether they can fool a majority of the voters through 2012. Fear mongering and race baiting are their choice of weapons.

I am looking forward to Doc Marcus "Gee I hope this closet door is secured properly" Bachmann's first "I am not gay" press conference. Make popcorn, it will be Faaab-U-Louuuss!