The Search For A Substitute For Thought Continues

David Weigel, "Why Did Anyone Underrate Bachmann?" June 15

REVENGE of the bicycle-ridin' Lefty geezer: in "downtown" Carmel this AM one of the hardhats whose ranks double the population of Indianapolis' snooty neighbor to the great white north every morning passed by me on the trail. He was on the wrong side, and paying no attention until I barked at him, otherwise I wouldn't have added "I didn't realize The Village People were playing the Palladium." *

Nostalgia! It got me to remembering those heady twenty-five minutes when Dave Weigel was a First Amendment hero for bravely tweeting Ezra Klein, before the employer who fired him hired him back.

MANCHESTER, N.H. -- Neil King has the latest take on Michele Bachmann, Serious Candidate. Why are we seeing so much of this storyline? Back in March, when Bachmann started floating the idea of a presidential bid, there was already beaucoups evidence that she had a unique hold on a powerful constituency, a bid for a few other constituencies, and more charisma than anyone in the race so far.

So this narrative is already getting stale. Not yet stale: The hysterical "catfight" storyline, in which the fates of Bachmann and Palin are tied to one another like those of Vic and Blood.

Four links, including an explanation of the comic book graphic novel allusion--if you have to explain your hip frame of reference, maybe it's not a frame of reference--how much longer is this sort of thing going to justify a career? Not to mention that Ben Smith is suddenly hysterical when he's hyping a Bachmann/Palin feud, as though that doesn't describe his body of work; y'know, I'm not sure this is the spot I want to go to hear how smart Michele Bachmann really is.

Though, luckily, I don't, because that's already old news. Because Bachmann has a unique hold on a powerful constituency, like Snooki, Paris, and Charlie Manson before her, and because she could make a bid for other constituencies, just like Elvis becoming a movie star. With equal effect on Western culture. The new story here is that The Media just naturally assumed an utter loon who can't put a logical syllogism together if you spot her the three sentences was stupid. Biased Media.

We can cut to the chase right now and explain why this storyline's so popular.

Both Palin and Bachmann are attractive women who are great on TV, and people like watching that stuff.

Okay, assuming you mean "good on teevee" and "people enjoy watching" in the sense that a show about a clueless shoplifting malapropster and her invisible pal, the ghost of a talking deer permanently caught in the headlights of the SUV that killed it, could be a ratings winner. Sure. But then, again, so could any fucking piece of shit. Doesn't make Gene Simmons Presidential material.

Beyond that--far, far beyond it--since when is "this would be boffo in the sticks" an argument for anything besides pizza with cheesefood baked into the crust, or "crust"? For cryin' out loud: Newton Minnow called teevee a vast wasteland in the early 60s, and that shit's highbrow compared to what's on today. The fact that Bachmann can get a million idiots to follow her doesn't make her smart; it just means we have to lower our expectations of idiots once again.

There's a lot more to it. The two of them know how to feed the story, hence the joint fundraiser they did in 2010. The disputes between the two camps are real.

I'm not convinced either of 'em can feed paper into a printer, but thanks for verifying the story without being hysterical about it.

But the idea that Bachmann's success is reliant on Palin's, and that she'd collapse if Palin entered, is unfair to Bachmann. The congresswoman has always been more disciplined;

She's More Disciplined Than Sarah Palin! Catchy slogan. Though it also applies to the three-year-old next door.

she has built a national following while keeping her personal story out of it.

She Appears More Stable Than Sarah Palin! See my earlier comment about my neighbor's tyke.

Actually, look at the way Bachmann and Palin handled a specific problem. Bachmann did a tour of New Hampshire in May and said, very incorrectly, that the battle of Lexington and Concord had involved Concord, N.H. It was the gaffe reporters were waiting for, but Bachmann admitted it, and joked that she'd made the mistake because New Hampshire, not Manchester, was where people still remembered the battle. (IE, they're more patriotic.) Compare that to Palin making chorizo out of a statement about Paul Revere's ride -- and then claiming that when she talking about him "warning the British" and ringing bells, she was totally right.

She's Not As Much Of A Fumbler! This was a problem? Christ, Weigel, could you just give up? This crap about not really being a Republican because you're too much of a hipster-libertarian, then apologizing for the worst sort of Teabagger mindlessness, again and again (it's the Media's fault! There's a novel, 21st century take!) is past its sell-by date. You're a Republican, in the face of at least thirty-years' evidence of why you shouldn't be. Pretending that Bachmann--likely your party's VP nominee, at this early date--isn't just Sarah Palin with 3% more smarts and 25% more PR malleability might be fooling somebody out there, but sooner or later it's going to be a question of whether it actually fools you.

By the way, she just jumped up in the polls. To Donald Trump's old numbers. With a bid in for Newt Gingrich's constituency. And maybe Herman Cain's. Best wishes. And welcome to her. 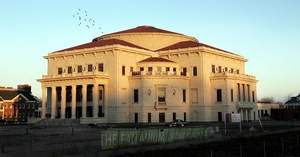 The Palladium, Carmel's $200 M performing-arts shrine to thirty years of Republican shenanigans, just announced it will be asking the city for twice as much money next season--$4 M per--so it can present twice as many third-tier acts as last year, and lose money at twice the rate. Carmel owns the Prairie Taj Mahal, but it's operated--on a fifty year deal--by a non-profit which--please sit down--was supposed to absorb all the costs, then was supposed to absorb all the costs after it got a half-million seed money from the city, and now is basically saying, "Whaddya gonna do--put the place up for sale?" The Mayor--whose bright idea this is--has assured everyone that taxes won't be raised to cover the increase. Which, of course, means other services will be robbed, and the citizenry is supposed to be grateful. I've said it before, and I'll say it again: where Muncie, Indiana, was once considered Middletown, USA, Hamilton County is now the template of what happens when Those Tax Averse Republicans get their hands on tax money, and can't spend it on weapons systems. At least not yet.
Labels: Palin 2012
Email ThisBlogThis!Share to TwitterShare to FacebookShare to Pinterest

Palin & Bachman have demonstrated that if a woman wants to be President, she'll have to be young-looking "pretty", crazy, and very stupid to win. The older, plain woman with good sense, brains and experience, such as H. Clinton, might as well stay home baking cookies.

That is one ugly, clunky-looking building.

I'm afraid this post contradicts my previously stated position, Mr. Riley (IF that is your real name!):

Palin is a little too cerebral for me.

I have to go with One L Michele.
~

Sorry, but I have to pretend that your post doesn't exist.
~

Can Dave explain to me La Bachmann's position that she is in favor of a constitutional amendment that will nonetheless not apply to the states? Becuase her reasoning is far too nuanced for me.

"... it just means we have to lower our expectations of idiots once again."

Sheesh, I'm running out of slots at the bottom of the idiot expectation board.

"Can Dave explain to me La Bachmann's position that she is in favor of a constitutional amendment that will nonetheless not apply to the states?"

Simple. The federal government will ban gay marriage with a constitutional amendment, but states will still be free to pass additional laws criminalizing gay behavior. You dress that up in "leave it to the states," because clumsily pretending that you're not going to use Leviathan to ban stuff Jeebus hates brings the crew at Reason to orgasm. See also: abortion rights.

a unique hold on a powerful constituency

If you're inclined to admire diplomatic phrasing, that's a fine example, avoiding as it does any actual description of the "hold" or the "constituency". It maps perfectly well to my interpretation, which is roughly, "Ol' Crazy Eyes sure knows how to talk to Ralph Reed's mailing list."

More data for the "What Happens When Republicans Run Local Government" file: the city of Colorado Springs, home of Focus on the Family and other winger Xtian orgs, is now cutting down the trees in the street medians. Why, you ask? Because when water was tight a few years ago they quit watering them for a year, so that damaged them, but now thanks to the new austerity budget, they have quit watering them entirely due to lack of funds for water and staff. These are 100 year old trees, but who cares, right? At least the locals were able to prevent that onerous increase of $200/year in property taxes!