Everything I Needed To Know I Learned From The Byline

THE other day I went to Barnes & Noble, or as it's known in Indiana, Barnes and Noble's, for some peace and quiet. I needed a book. I figured they still had some. I wouldn't have gone to Barnes and Noble's except it's the last bookstore standing. The place has been Wingnut Book Central for over a decade now. Remember the days of Hillary Hate Book of the Week? Every last one of them was on display just inside the front door. Now, for a public spitter I'm relatively phlegmatic about seeing intentional bias everywhere. I'm barely exaggerating here. The Current Events section was practically a Rush Limbaugh portrait gallery. You could chalk that up to sales, I suppose, but I went there specifically to check on Rush Limbaugh Is A Big Fat Idiot when it was on the Times Bestsellers List, and found three copies, there in the back, spines out.

So it wasn't really a surprise that, while hunting for the remains of the once-thriving Computer section I stumbled on Shlaes' Coolidge.  Something like fifteen dour copies, two columns face-out and several copies on either side. Which is one for every person in northern Marion county who could identify the man in a multiple-choice quiz.


A few years ago, an alumnus of Williams College in Massachusetts, Thomas Klingenstein, took the opportunity of a golf game with the president of Bowdoin, a Maine college similar to Williams, to suggest that diversity received too much emphasis at Williams and that Western civilization received too little. “Common American identity,” where race and class matter less, is lost.


Yes, why can't academia be more like The Claremont Institute, where Mr. Klingenstien is chairman of the board of directors, and where only one race and class matter?


Bowdoin’s president, Barry Mills, slapped back in a 2010 convocation speech…Mills also dropped in a few remarks about “loyal supporters,” which probably had a chilling effect because the words suggested that any Bowdoin alum who might side with the Williams man might be disloyal.


Rather than fulminate, however, Klingenstein funded a study by the National Association of Scholars to see whether his perception of Bowdoin was warranted. He picked Bowdoin, not Williams, to examine, perhaps out of pique.


Oh, perhaps. Or perhaps out of ideological assholery.

I guess we don't have to ask why he picked the National Association of Scholars: 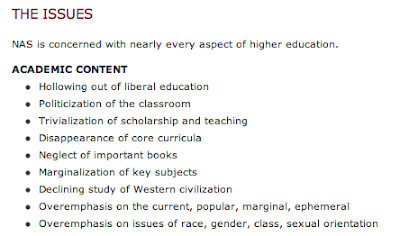 Yet once the work got going, he says, “curiosity replaced anger.” The 360-page study, released this week, suggests that the quiescent Maine college is fundamentally different, more radical, than it was 25, and certainly 40, years ago.


Attention, white people with English or Business Degrees from wealthy private colleges: by and large, this is what happens, as something called "Time" does something typically described as "passing".  The academy in 1960 was considerably different from its 1920 version, too. This was probably even true in your day for the Great Books curriculum, or Screwing Widows and Orphans Studies. So maybe you noticed.

And the reason Dead European White Guy Studies have been largely supplanted is scholarship. Not Commies. Dead European White Guy Worship--there's still plenty of them, and their followers, around, by the way--lost their monopoly. In the marketplace of ideas. Which I thought was something you two understood. In fact, I thought it was the only thing you understood. Why don't you spread a little honey over at the NAS on the condition they get off their tenured asses and change scholarship with, you know, scholarship?


The researchers, Peter Wood and Michael Toscano, commenced by defining their goal: to describe the penetration of what they call “identity emphasis” -- a philosophy that looks at the world in terms of race, sex, ethnicity or other groupings. The National Association of Scholars also looked at green education, because environmental classes are often explicitly anti- capitalist.


It cannot be stressed enough: one of the necessary tools of cultural literacy in the 21st century--as it was in the 20th--is the ability to understand what constitutes a scientific study, and how to understand its limitations. This is not one. It's a 400-page hit piece some ideologues with degrees sold to some ideologue with money. "Identity emphasis" isn't an empirical category; it's a argument. "Green studies are explicitly anti-capitalist" isn't an hypothesis. It's a tell the size of Mr. Klingenstien's greens fees.

Although the report reviews Bowdoin’s history, its real starting point is the 1960s, when the college was both turning away from its religious roots and preparing to admit women. Bowdoin still required four semester courses in each of three areas -- humanities, math and science -- and in social studies. One could say 1960s students had a common education.

Soon, however, this changed.

If we all just dream hard enough, some day there'll be a Department of Evil Sixties Studies. And these people will have nothing to say about it.


In 1970, in the name of liberating students from “forced exposure” to certain academic areas, the college dropped requirements unrelated to a major. Like many other colleges, Bowdoin introduced official identity studies through what was then called Afro-American studies. In the 1980s, women’s studies was added as a minor. Gay and lesbian studies came along at some point, as well.


All these shifts affected campus life. To many, they seemed a warranted expansion at a stodgy institution. And the undergrad who sought traditional general classes such as “Survey of English Literature” could find them. Bowdoin could claim it offered the best of old and new worlds. This Bowdoin of the 1980s and early 1990s is the Bowdoin that most parents tell themselves still exists.


Dear me, "most parents" are sending their children to Bowdoin in order to prepare them for 1960?


Yet, as Wood and Toscano show, Bowdoin itself didn’t freeze in the 1980s. It shifted further, with the identity classes proliferating to the present day. Where once there was only one true identity program, Afro-American studies, now there are five: Africana studies, Asian studies, gender and women’s studies, gay and lesbian studies, and Latin American studies.


One in five courses offered to undergraduates in fall 2011 was either about a distinct identity or “green,” relating to the environment. Surveys, including coursework on Western civilization, faded: Today, 4.4 percent of Bowdoin’s classes are surveys versus 14.2 percent in 1964.


Klingenstein paid a couple of academics to produce a 400-page dissertation on the Bowden course schedule?


In 2012, about 10 of the 35 first-year seminars emphasize the difference in identity groups and affiliate with identity-studies programs: “Africana Studies 12: Affirmative Action and United States Society,” “Anthropology 13: Beyond Pocahontas, Native American Stereotypes,” “Gay and Lesbian Studies 17: The Sexual Life of Colonialism.” Students are getting a common education of a sort -- in political correctness -- not one fostering color-blind citizenship.


Well, you know what they say: The fuck didn't you emphasize a color-blind society when you ran all of it?

Sheesh, an Africana Studies course studies Affirmative Action. An Anthropology course surveys Native American stereotypes (the sort of thing which, back before the Evil Sixties, Anthropology sometimes helped perpetuate). And tell me, which do you object more to hearing about: Sex, or Colonialism?


“Identity studies is the one most inescapable part of Bowdoin education,” Wood says. “The student can avoid anything else, but not this.” A student can get a humanities education there that isn’t based on identity, but not easily. This, in turn, warrants discussion.


Okay. A student at Bowdoin can get a humanities education that isn't based on identity. And nothing is easy. End of discussion.

Do NOT read Amity Shlaes. Serious brain damage is almost inevitable--whether from the content of her writing or the uncontrollable urge to drive a Bic pen through your forehead while reading.

Your dare too much with such things!

I am a Hoosier and I never noticed that Barnes and Noble's is not the store's real name.

For her contributions to education, Amity Shlaes should be stripped, scourged, and nailed to a cross.

In readng the original (yeah, I know, shit-goggles needed), we learn that Shlaes is a "fellow" at something called the "Goerge W. Bush Institute." Which really ought to be all the introduction needed.

"In 2012, about 10 of the 35 first-year seminars emphasize the difference in identity groups and affiliate with identity-studies programs" And the other 25 courses were what? It's just outrageous that 29% of these courses were set aside for studying people unlike the ~25% of the population that is straight white male. Simply outrageous.

p.s. The comment form is asking me to "choose an identity"! Oh the irony.

I hope Wood and Toscano turn their attention to the field of 'fake review writing' next. At present computer science specialists in countries such as Bangladesh, India and Indonesia dominate the field. Win back market share for America, guys!

I like it that these old white guys screech like poopy-pansted babies when it seems as though old white guys are getting the short-ended stick of respect and deference, but they expect those of us who are brown, female, and/or gay to accept our marginalization in silence, as part of the natural landscape of the earth — against which rebellion is not only Satanic, but unseemly.

Just because old white guys were able historically to silence the voices of everyone but themselves doesn’t mean the rest of us forgot how to speak.

Also that identification as anything but an old straight white dude is somehow a deceit, a tendentious put-on, or an imposition upon the respectable, and in all cases a substandard argument. Gross!

They all should’ve watched more Star Trek in the 60s, probably.

"Most parents" by what measure? I have kids in (and beyond) college, and I sure didn't want the pre-1970 curriculum for them. Oh, wait -- she means "most fathers on the golf course whose children from their second marriages to trophy wives are now going to college." Got it.

bjkeefe said...
This comment has been removed by the author.
7:12 PM EDT

And here I thought I was the only one who couldn't get past that visual pun.