Monday Olio: I'm Going Back To Bed, Wake Me On Friday Edition 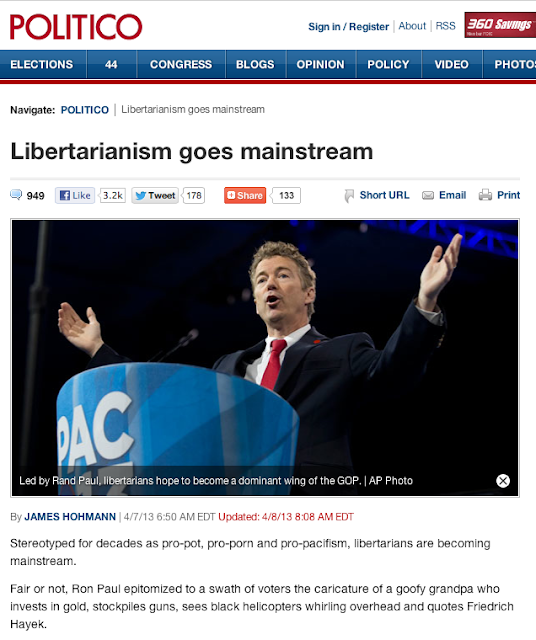 Start your watches. In forty-fifty years time, the rift between economic Libertarians and religious Libertarians will become so great that Politico will notice.

How delightful, by the way, is that "Stereotyped for decades as pro-pot, pro-porn and pro-pacifism…"? Which should we add first: 1) "When, in reality, it's been the other pro-gun, anti-tax party for a quarter century" or 2) "A stereotype disproven by the fact that its acknowledged leader, Kentucky Senator and Lunatic (but I repeat myself! Twice!) Rand Paul doesn't believe in any of those"? 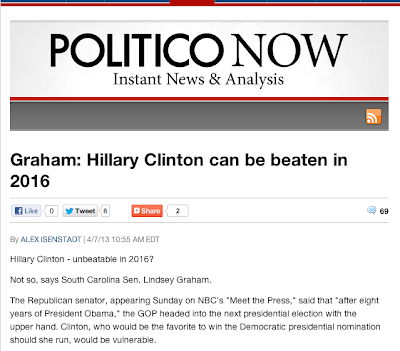 The Republican senator, appearing Sunday on NBC's "Meet the Press," said that "after eight years of President Obama," the GOP headed into the next presidential election with the upper hand.


This is just the sort of forward thinking the party needs. Lindsey Graham: Schoolmarm-in-Chief, 2016! 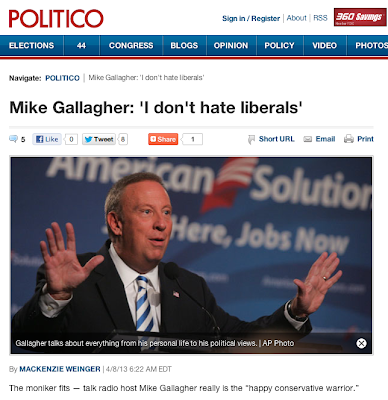 
And each week, about 3.5 million people tune into Gallagher, according to Talkers magazine, which ranks him as having the fifth biggest talk radio audience in the country.


Talkers magazine. I can't keep up with these kids today and their crazy trends. 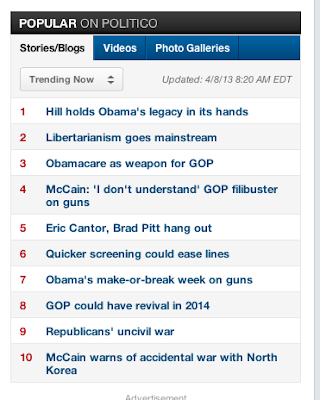 Look on my works, ye Mighty, and despair!

Dear Lord, they've discovered a way to make a Ross Douthat column even worse! They'll be delivering this stuff by drone soon enough, and contrails will be obsolete. Unless Rand Paul can stop them.

b) The next paragraph begins by explaining that Cardinal Douthat had, in fact, missed the entire point of that Princeton Mom marriage thing. No biggie, though.

c) Halfway between the two we get this: " It used to be that a rich man would be just as likely to marry his secretary as the cute girl from pre-med." As her example Rosin cites Mad Men.

d) As further proof of this titanic social shift Rosin notes that "Even athletes don’t just marry the bombshells anymore; they marry their equals." One need not bother clicking the link to know in one's marrow that it will lead to Tiger Woods. Who's now an item with Lindsey Graham Vonn, above. Who is, and I ask the Defense to stipulate to, both a bombshell and a world-class athlete. Erin Nordegren, Tiger's ex, was a Swedish model. We'd check in with Oscar Pistorius to break the tie, but he's not taking calls.

You know, I wouldn't dislike Politico so much if it wasn't so fucking terrible.

Libertarianism = Anarchy Lite. The Five Minute Rule always applies, because the libertarian nirvana they're talking about only exists in a bizarre parallel universe.

Calming Influence: 'I do hate Mike Gallagher.' I just don't know who he is.

Riley, isn't it Elin and not Erin but I can't quibble because the piece was too funny. And I must fess up that I had never heard of Mike Gallagher but I presume that that's a good thing. I just finished reading the comments at that other fortress in the media, The Star, reporting that the CIB just coughed up 2 million for suites at Lucas. They weren't as funny as your blog but they were pretty good.

Nothing says "mainstream" like a speaking slot at CPAC.

Isn't that Michelle Rhee? No, just no.